Here in Maine we had a lot of snowfall today. It wasn’t very cold — well within the normal range for this time of year as far as temperature is concerned — but the snowfall was very heavy, nearly a foot of snow on the 1st of April. No, this is not an “April fool’s” post.

There is an interesting post at Climate Central on snow in the northeast U.S. It touches briefly on the trends which might be present, and those we might expect in the future (over the next century). It also presents a nice graphical access to data for total winter season snowfall from 98 northeastern stations with complete or near-complete coverage from 1980 to 2010, with those few cases of missing data infilled by interpolating nearby stations. The data they use can be found here, and originate from the Northeast Regional Climate Center.


Asking whether global warming might be responsible for the recent heavy snowfalls, their answer is uncertain:

The short answer is “maybe.” Average seasonal snowfall can come from many small storms or fewer, bigger ones. The past two winters have seen an abnormally high number of major storms — storms that drop more than 10 inches over large areas. Both 2009-2010 and 2010-2011 had three winter storms that qualified as at least a “Category 3” based on the Northeast Snowfall Impact Scale (NESIS). Even the 1995-96 winter didn’t have that many storms of this ranking, and you’d have to go back to 1960-61 to find as many high-scoring winter storms in a single season as we saw in each of the past two years.

However, it should be noted that the NESIS scale also factors in whether the storm struck populated areas, so large storms that hit unpopulated northern New England would not register at the upper echelon of this scale.

In the short run, climate change could actually mean more heavy snowstorms. A warmer atmosphere means that the air can hold more water vapor, and this can result in more storms with heavy precipitation. In fact, scientists have already documented an increase in heavy precipitation events. If it is cold enough to snow, these storms can drop heavy snow instead of rain. However, the possible links between climate change and heavy snowfall is an area of active scientific research, with no definitive answers yet. And many credit the past two years of heavy snow to the North Atlantic Oscillation, and not necessarily to climate change.

Here’s an example (a pretty typical one for the northeastern U.S.) of the snowfall record from 1980 to 2010, from Spring Grove, Pennsylvania: 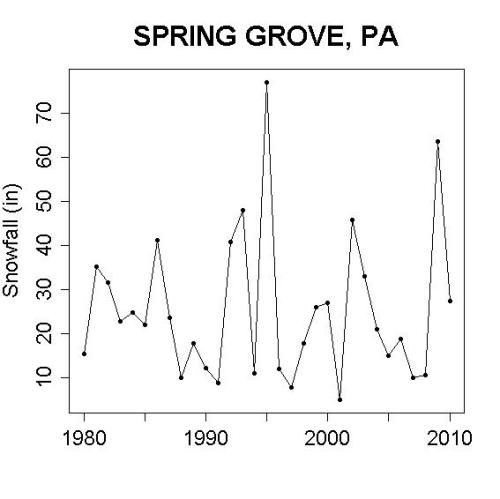 The time value is the year when the season begins, so the 1995 value (the highest at this station, and an especially snowy year for most of the northeastern U.S.) is for the 1995-1996 season. The 2009 value was quite high as well. The 2010 value is not too large, but the 2010-2011 season isn’t actually over yet (I doubt this data includes today’s snowfall) so it might increase.

Of course not all the station records are the same. To find persistent patterns across multiple records, I applied PCA (principal components analysis). This revealed that the top two PCs were responsible for most of the variation of the data records. The first principal component vector (the coefficients applicable to each of the 98 stations) shows that they’re all of the same sign, so the first PC is a weighted average of all station records. And here’s the vector itself, which can be interpreted as a vector of station weightings, arranged in order of latitude of the stations (from south to north), with the x-axis in fact showing the actual station latitude:

Although there’s some variation in the 1st PC vector (a few stations have much less weight than others), the coefficients are surprisingly even, and the 1st PC is surprisingly close to an average of all the station records. And here’s the 1st PC itself (re-scaled so that it represents a true weighted average of snowfall for the 98 stations):

Note that 1995 shows the highest value, so that was a year of consistently heavy snowfall across the northeast U.S. region. It’s also true that the 2009 value is pretty high, but not nearly so much so as for Spring Grove, Pennsylvania.

When we look at the vector defining the 2nd PC, we get a totally different picture (again the stations are in order of latitude from south to north, and the x-axis is latitude itself): 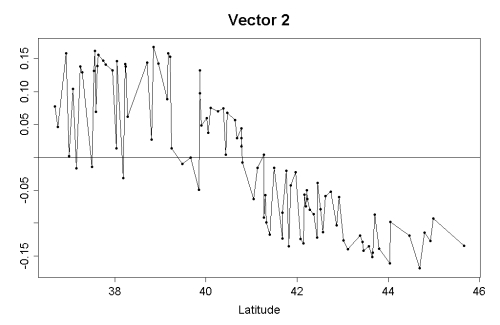 The positive values are almost entirely for more southerly stations (below latitude 41 deg.) while the negative values are for more northerly stations (above latitude 41 deg.). So, the 2nd PC is pretty close to the difference between the southern average and the northern average. In fact, here are the vector coefficients plotted in latitude/longitude (imagine a map of the northeast states superimposed, with Maine in the upper right and Ohio about halfway up on the left), with the positive coefficients in blue and the negative ones in red and larger dots representing larger coefficients:

When we compute the actual 2nd PC, we get this:

From this we see that the south-minus-north difference (the 2nd PC) has declined pretty consistently over the years as the snowfall amount in the more southern states decreased relative to the northern states, until 2009 when a dramatic change took place. The 2010 value is still above the pre-2009 trend, and will probably be even more so when the season is over and all the data are included. 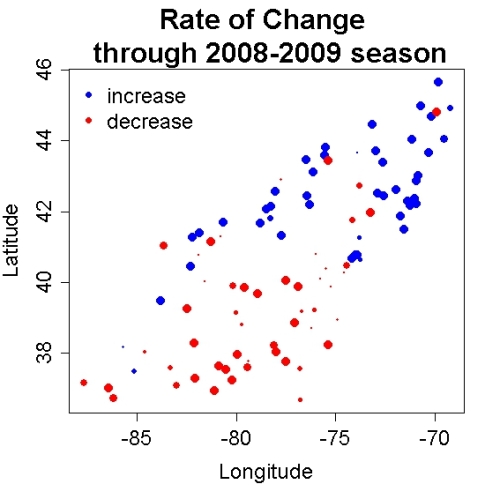 It’s quite clear that up until the 2008-2009 season, snowfall had been in decline in the mid-Atlantic states but was on the increase in more northerly, New England states. Hence the southern-minus-northern difference (the 2nd PC) was in decline as well. But in 2009 the pattern changed dramatically, as evidenced by the incredibly high value of the 2nd PC for the 2009-2010 season.

The real story of northeastern U.S. snowfall since 1980 isn’t in the overall average, which (as the 1st PC shows) doesn’t show any real trend. It’s in the difference between the more southerly (mainly mid-Atlantic) states and the more northerly (mainly New England) states. Until the 2008-2009 season the southerly region showed decrease while the northerly showed increase, but that reversed suddenly (and extremely!) in the 2009-2010 season.

Some would say that both the pre-2009 trend and the 2009 anomaly were due to global warming, the decline in mid-Atlantic states caused by warming temperatures, the anomalous 2009 (and 2010) behavior caused by changes in air currents brought about by the decline of Arctic sea ice. I’d say, that when it comes to snowfall patterns in the recent past and near future, we don’t really know enough about the details to answer such questions with confidence.

But I do expect, with high confidence, significant reduction in total snowfall and its areal coverage through the 21st century, simply because it’s gonna get hotter in here.