It wasn’t that long ago, back in 2000, that David Viner of the Climate Research Unit stated that winter snowfall in England will become “a very rare and exciting event”. He added that “Children just aren’t going to know what snow is.” His comments came on the heels of several very low-snow winters in England.


After heavy snowfalls in 2010 we were informed that global warming could lead to more winter snow:

The fact that the oceans are warmer now than they were, say, 30 years ago means there’s about on average 4 percent more water vapor lurking around over the oceans than there was, say, in the 1970s. Warmer water means more water vapor rises up into the air, and what goes up must come down. So one of the consequences of a warming ocean near a coastline like the East Coast and Washington, D.C., for instance, is that you can get dumped on with more snow partly as a consequence of global warming.

Heavy snowstorms are not inconsistent with a warming planet … In fact, as the Earth gets warmer and more moisture gets absorbed into the atmosphere, we are steadily loading the dice in favor of more extreme storms in all seasons, capable of causing greater impacts on society … If the climate continues to warm, we should expect an increase in heavy snow events for a few decades, until the climate grows so warm that we pass the point where it’s too warm for it to snow heavily.

It’s still cutting-edge research and there’s no smoking gun, but there’s evidence that with less sea ice, you put a lot of heat from the ocean into the atmosphere, and the circulation of the atmosphere responds to that … We’ve seen a tendency for autumns with low sea ice cover to be followed by a negative Arctic Oscillation.

So — what’s the real story?

With a simple “boxplot” of snow cover by month, this seasonal cycle becomes evident:

It’s also evident that northern hemisphere snow cover tends to be lowest in August and greatest in January, although the single largest value on record occured in a February, of 1978.

We can remove the influence of the annual cycle by computing snow cover anomaly, the difference between a given month’s snow cover and the average for the same month, to see whether each month is above or below average for that time of year: 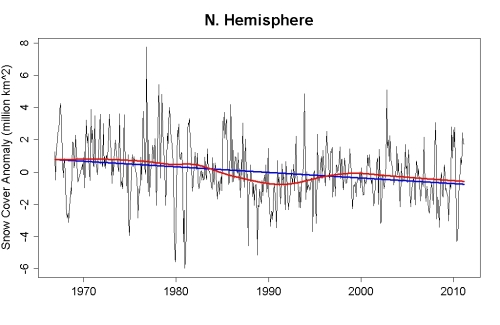 Now we have a clearer picture of the overall changes. There appears to be an overall decline, as indicated by the blue line, which is a linear regression fit to estimate the overall trend. The decline is statistically significant, so it’s not just an effect of statistical noise. However, a smoothed estimate (a lowess smooth, the red line) indicates that the long-term changes may not be simply linear.

But there’s no denying that the last two winters have had heavy snowfall in the northern hemisphere. We can confirm this by examining data for individual months. Here, for instance, are the snow cover data for Decembers: 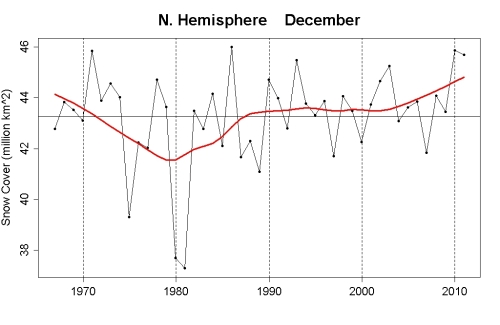 The last two Decembers (2009 and 2010) have high (but not the highest) values, and the smooth fit (red line) suggests a possible upward trend, especially recently. However, linear regression gives a trend estimate which is not statistically significant. I also fit 2nd- and 3rd-degree polynomials, also with no statistically significant fit. So the December data could be just the result of random fluctuations.

January data have a similar appearance: 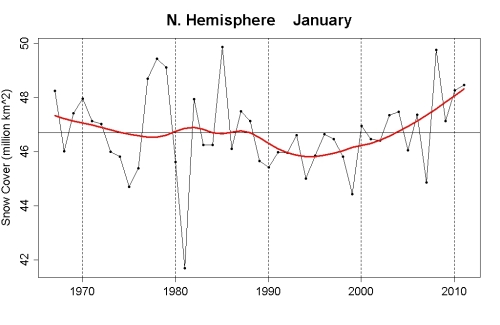 Linear regression still gives no statistically significant trend, but a quadratic (2nd-degree) polynomial is almost so. The “false-alarm probability” is 5.1%, which is so close to the standard cutoff of 5%, that one should consider the result to be meaningful (but not ironclad) evidence of a genuine pattern, a dip during the 1990s followed by recent increase.

The February pattern is also similar: 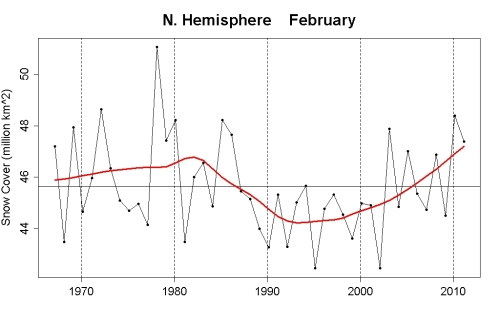 We can even combine Dec-Jan-Feb into a winter estimate, which shows a statistically significant response to a quadratic polynomial. The pattern is, as you might expect, a dip in the 1990s followed by recent increase.

Given these patterns in wintertime, how is it that the overall (all 12 months) pattern seems to be decline? It’s because there’s a definitely significant trend of decreasing snow cover during summer months. Here’s the data for June, July, and August:

All three summer months show a statistically significant decrease, as does the combined Jun-Jul-Aug summer snow cover. In fact the statistical significance of summer decrease is much stronger than that of winter changes.

What should we expect in the future? For long-term forecasts, I’m not content with purely statistical models. They’re fine for very short-term prognostication, one or even a few time steps into the future (depending on how smooth and steady the trend is, and how large the noise is). But to project the long-term changes, I’d like models that don’t just incorporate statistics, but have some phsyics to go with ’em.

What does the physics say? To have snow, you need two things. First, cold air — but not too cold. Second, you need moisture.

Global warming affects both. It increases temperature overall, which, all other things being equal, would lead to less snow. But we should keep firmly in mind that temperature changes won’t be uniform. It’s easily possible (and this winter, actually happened) that some regions will be colder while others are hotter. Especially if the heat goes to regions that are usually extremely cold, while cold penetrates to more moderate regions, that temperature change could favor an increase in snowfall. And that seems to be one of the factors in this year’s heavy snow cover.

Global warming also increases moisture content in the air. Not only is this very basic physics (Clausius-Clapeyron!), it’s actually been observed:

This factor, due to global warming, could definitely favor more winter snow.

So, the physics can go either way. Ultimately, global warming will become so extreme that I believe the warming will reduce snow cover, dramatically, throughout the year. But how long it will be before we reach that “ultimately,” I don’t know.

I would say that Viner’s comment about England soon wondering what snow is, was ill-advised. I also think that comments about global warming leading to more heavy snowfalls in upcoming decades are premature. The physical argument is sound, but I’d put it in the “tentative” rather than “definitive” category. But I acknowledge that climate scientists know more about the physics than I do.

I’d also say that much of the discussion from climate scientists has not been definitive. It’s clear that more snow is not inconsistent with global warming. But again, forecasting many years into the future requires more detailed knowledge of the process than I think we’ve yet acquired. As for forecasting based on statistical models, well, more than a few years out, I don’t trust ’em.

Two things, however, are abundantly clear. First, it’s quite correct that the recent heavy winter snow is not evidence against global warming. Second, that those in denial will continue to claim that it is.