The most interesting thing about Frederikse et al. is that not only do they publish a new sea level reconstruction based on tide gauge data, to reckon how much sea level has risen, they also attempt to reckon where that sea level rise came from.

Here’s their estimate of sea level since 1900:

And here’s what it says about the rate of sea level rise, according to my usual analysis: a lowess smooth in red, and PLF (Piece-wise Linear Fit) in blue:

The latest rate, according to these data, is about 5 mm/yr. Over a century, that’s half a meter (about 20 inches). That’s the global amount, lots of places will see more or less because of local conditions (particularly, vertical land movement). It seems to me to be extremely unlikely, downright implausible in fact, that the average over this century will be less than that.

Here is their estimate of each factor’s contribution to sea level rise since 1900: 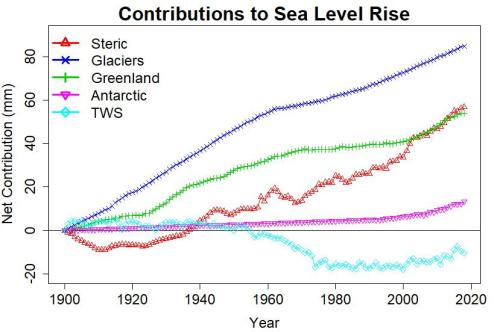 Glacier melt has raised sea level more since 1900 than any other factor, but has not shown much recent sign of acceleration, and appears to be slower now than in the first half of the century. Greenland melt was also a major factor in the early 20th century, and has shown signs of both deceleration and acceleration with high rates recently. Steric change caused sea level fall in the first decade of the 1900s, but has risen steadily since and is now moving fast. TWS has caused an overall drop in sea level since 1900, of about 10 mm. Antarctica has countered with about 10 mm net contribution to sea level rise, but took quite a while to get started.

We can also gain some insight by shifting all the curves, to show each factor’s contribution to sea level rise since 2000: 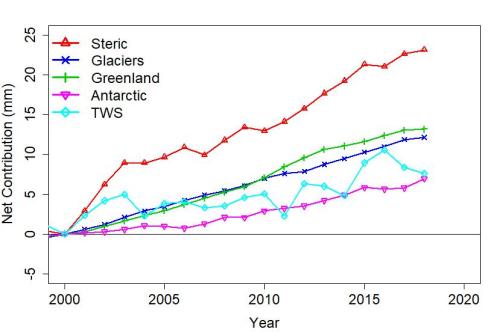 Steric is in the lead; Greenland may have contributed the most since 1900, but since 2000 the “big gun” has been thermal expansion of sea water. Glaciers are still at it, and so is Greenland, but two factors are now behaving differently than before. TWS is no longer lowering sea level, it’s raising it, and Antarctica was doing almost nothing until recently, but has now started making its contribution felt.

I applied the same analysis to the contributions, as I did to the sea level data itself. Fascinating results emerge, and the most striking is the rate of sea level rise/fall due to Antarctic ice melt: 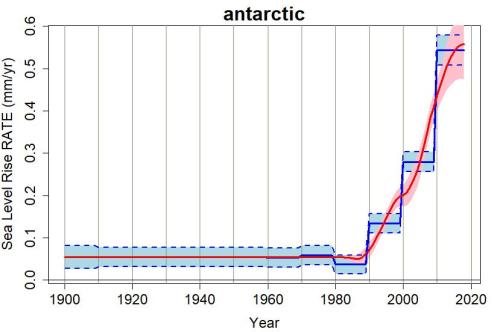 This leads me to suspect that much of the reason behind the enhanced rate of sea level rise in the last decade is that after nearly a century of inaction, Antarctica has started to kick in.

In the long run (to the end of this century and beyond), we don’t expect TWS to be a major factor. Thermal expansion will continue, as fast or faster than now but not tremendously so; it takes a long time for heat to penetrate deep into the ocean. Glaciers will keep melting, but probably not much faster than now if at all. The fact is that even if we melt all the world’s alpine glaciers and the extra heat penetrates far into the ocean, we’ll still only get about 1 meter of sea level rise, and it will take a long time — longer than this century — for that to happen.

Then there are the big boys: Greenland and Antarctica. If all of Greenland melts there’s 7 meters of sea level rise, and if Antarctica goes, over 50.

Greenland and Antarctica aren’t going to melt this century. But they might dramatically increase the rate at which they discharge ice into the ocean. According to Richard Alley, a leading glaciologist, this tends to happen where the ice and the ocean meet, and the two phenomena which bring it about are the disintegration of floating ice sheets, and calving-cliff retreat.

When an ice sheet disintegrates it tends to happen quickly; we’ve seen the picture of the Larsen B ice shelf falling apart in a matter of days, after having survived many thousands of years. When it did, it no longer acted as a “buttress” to hold back land-based ice from reaching the sea. The flow rate just about doubled — in the twinkling of an eye, geologically speaking.

Computing how it works is straightforward, in that we know all the physics. It’s also impossible, in that there are too many variables and processes to keep track of them all, even with a supercomputer. So, models are developed to simulate processes, and they’re getting better — we’ve actually learned a lot — but according to Richard Alley, we still have a lot to learn before we’re ready to make reliable predictions.

When the rates at which ice is discharged double or triple, if that happens in enough places — and especially in east Antarctica — the rate of sea level rise could become terrifyingly high. Imagine 30 mm/yr — six times the present rate — more than an inch per year. That’s 3 meters per century, and 3 meters is about 10 feet so goodbye, Miami. Goodbye, New Orleans. Goodbye, a lot of places.

And, according to Richard Alley … this is what keeps him up at night.