The Truth about Sea Level Rise

It’s easy to see that sea level rise has not been steady. It has accelerated.

In fact it has accelerated a lot, especially recently. For most of the 20th century, it rose sometimes faster, sometimes slower, but for the last few decades its rise has picked up speed. The clearest demonstration is the change in global mean sea level. There are several different estimates of that based on historical data from tide gauges around the world, which differ on how much and how fast sea level has risen, but they all show — without a doubt — that the rise has not been steady.


Let’s look at three different estimates, starting with the one which was, for a decade or more, probably the most trusted: that from Church & White. We’ll also look at a more recent estimate of global sea level since the year 1900, the one that was used in Rutgers University’s report on preparing New Jersey for climate change, that from Dangendorf et al. Finally, we’ll look at my own reconstruction. Here are annual averages of sea level, according to the three different estimates: 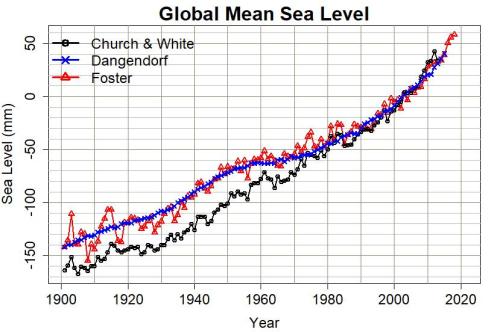 If sea level rise had been steady, then over time it would fluctuate about a straight line. Its deviation from that straight line would be just fluctuation. It would not show meaningful patterns, just noise.

So for each data set, I computed the best-fit straight line (by least squares regression), then subtracted the straight-line values from the observed values to compute the deviation from steady rise, the residuals:

No, this is not “just noise.” Of particular interest is the rapid rise over the last few decades, clearly shown by all three estimates. They don’t agree precisely how fast sea level has risen, but they do all agree that it has accelerated.

Of course, I’ll apply some heavy-duty math to estimate how fast sea level has been rising, according to all three data sets. First I’ll compute a lowess smooth, not so much to estimate the smooth value, as to estimate the smooth rate of change (i.e. how fast sea level is rising). Here are the results since the year 1900, for the data from Chuch & White (in black), Dangendorf (blue), and Foster (red). I’ll add pink shading to show the uncertainty range for the Foster data, but not all three data sets (because then the graph gets confusingly crowded).

I’ll also apply some not-so-heavy-duty math, by fitting a model consisting of connected straight-line segments over 30-year periods. This will estimate the average rate of sea level rise during each 30-year period, which I’ll graph like this: 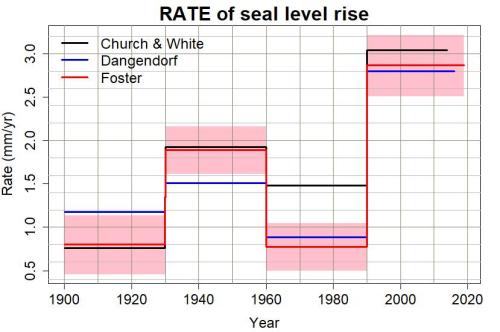 Yes, it’s easy to see that sea level rise has accelerated. Alas, it’s also easy not to see it — if you don’t want to.

Judith Curry recently blogged about her presentation to a “Conference on Energy and Decarbonization — a New Jersey Business Perspective. One of the issues she addresses, one which is important to New Jersey, is sea level rise.

I don’t know whether or not she believes the BIG LIE about sea level rise, but I do know that she repeats it. It’s the gist of her slide #11: 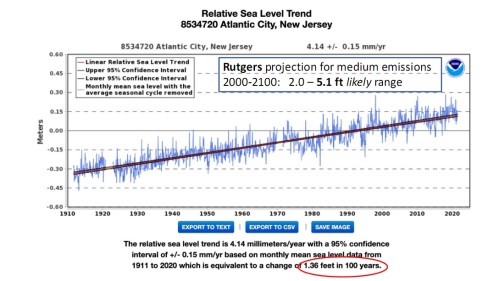 She even declares that “Since 1910, sea level has been rising at a steady rate of 1.36 feet, or 16 inches, per century.” And that, folks, is the BIG LIE about sea level rise: that it has been steady for the last century or more, that it hasn’t been getting faster (i.e. accelerating). A lot. Especially recently.

Her main advice (a business perspective) about sea level is to ignore the future sea level rise estimated by Rutgers University’s report on the impact of climate change on New Jersey. The only basis I can see for her making this claim is that she believes the BIG LIE about sea level rise (that it has been steady), and that she also believes the unspoken but bigger lie: that it will remain steady for the rest of the century.

37 responses to “The Truth about Sea Level Rise”