It’s hot these days, it’s unusually hot, even dangerously hot, in a lot of places a lot of the time. While America has been hit hard this summer, it seems that Europe has been hit even harder. Naturally, this causes a lot of people to speculate, or to outright declare, or to outright deny, that the frequency and severity of heat waves has been increased by man-made climate change, also known as “global warming.”

I decided to study a single location in Europe, the daily high temperature in a small region near the town of Beaune, France, known for centuries as an outstanding wine-making region.

I retrieved data from the ERA5 reanalysis, and for each year I isolated the data for summer, which is defined as the months of June, July, and August. Then I computed each year’s summer average temperature, giving this: 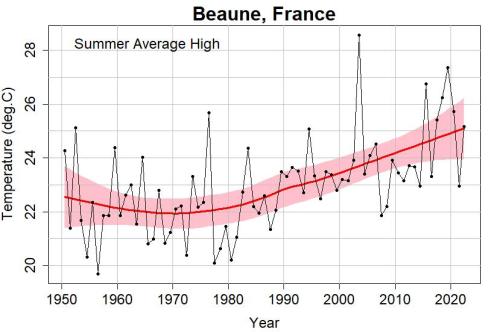 I probably should have left out this year (2022) because it’s not over yet (these data only go through June!), but I left it in place anyway. You might already have guessed that there is a statistically significant trend, summer is warming up. What’s not so obvious is that there is a statistically significant change in the rate of summer warming, which got faster around 1980.

The red line shows a lowess smooth, but you can verify not just an upward trend, but the acceleration around 1980, either with changepoint analysis or simply by fitting a quadratic curve using least-squares regression.

It’s also worth noting that the hottest single summer by far was 2003. That was the year when a massive fluctuation combined with the upward trend to make the hottest summer weather on record for this region.

For other measures of how much excess heat each year brings during summer, I also defined a “hot day” as one in the top 5% of all summer days, and counted how many such days occurred each summer; again the year 2003 really sticks out with more than any other, and in addition (as in, even if you leave out the year 2003 entirely) an upward trend is clear (and statistically significant).

I also defined the “hot degrees” as the accumulated temperature over threshold for each year; again, 2003 exceeds all others and again an upward trend is clear and statistically significant (even if you leave out the year 2003 entirely):

All told, it’s abundantly clear that summer temperature is increasing, and all the given measures of extreme hit are increasing too.

Perhaps the real detail is in the actual probability density function for summer temperature. I estimated it, using both a histogram and a kernel density estimator, for each decade individually, to investigate whether, and in what way, the distribution was changing. The first decade in this record (1950-1960) is quite different from the last (2010-2020): 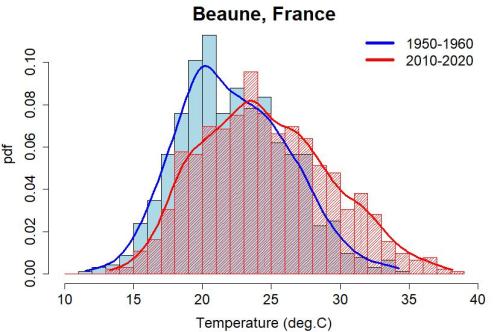 Furthermore, the difference is statistically significant (overwhelmingly so, according to the Kolmogorov-Smirnov test), and it’s not just because the mean value has increased; even the shape of the distribution has changed significantly, showing higher variance to accompany its higher mean value, both of which increase the probability and severity of extreme heat.

Looking at the estimated probability density for each decade, we see that the first four of them (from 1950 through 1990) are similar, but the last three (from 1990 through 2020) are markedly different:

This suggested comparing the distributions for the data before and after 1990, and it turns out to be very similar to the comparison of the first and last full decades given above: 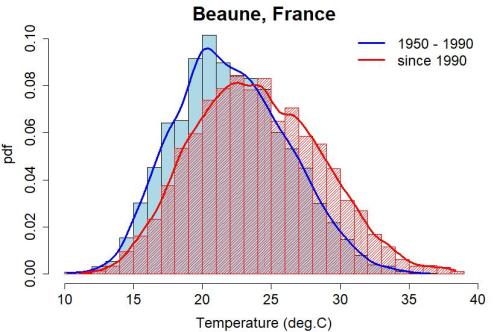 However, the statistical significance of both results — the the average has increased, and that the variance has increased — is greater because the comparison is based on larger sets of data.

There is simply no doubt that in this wine-growing region of France, summer extreme heat has increased, in terms of hottest day of the year, number of hot days, and total excess degrees per summer. This is reflected in the increase in summer average temperature, and although that is the dominant factor in the rise of extreme heat, it is further exaggerated by the increase in the variance of summer temperature.

But this record only goes back to 1950. Fortunately, for this region we have an excellent proxy data set directly related to summer temperature. In general, the hotter the summer in Beaune, France, the sooner they harvest the wine grapes.

Those dates are on record, and if we use them as proxy data to predict the summer average temperature, it does a remarkably good job, explaining 60% of the variance of the temperature data:

Now the interesting part: the record of grape harvest date (GHD) in Beaune, France goes back to the year 1354. If we use the grape harvest dates to estimate summer temperature, and use outbursts of extremely hot summer as indicators of extreme summer heat, we can estimate it going back over 650 years:

Clearly, extreme summer heat over the last few decades has been more frequent, and more severe, than in the previous 650 years.

It’s because of man-made climate change (global warming). This summer is what a 1.2°C-heated planet looks like. But in the future this won’t seem so bad — compared to the 1.5°C-heated planet. If we get to 2°C …