The memory is still fresh, in the minds of Americans, of the fearful heat wave which struck the Pacific Northwest in late June, reaching temperatures never before imagined in the region. It drives home the point that the effects of climate change are here, now, to stay — and that includes more and hotter heat waves.

Convincing Americans of that is made easier by the fact that we ourselves have seen it happen in our own back yard. I suspect it’s downright easy to convince Europeans — because they’ve seen it before. More than once.


I’ve been looking at the ERA5 data for locations throughout Europe, and they tell a consistent story: an increase in hot temperatures during summer, in some cases rather severe. Let me show you what’s been happening around latitude 45°N, longitude 5°E, in France not too far from the Swiss border. Here’s how the summertime average temperature has changed since 1950: 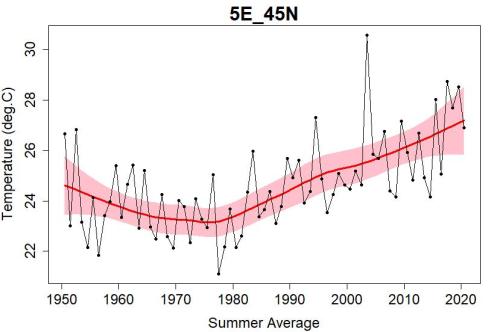 Yes, the increase is statistically significant; the average summertime temperature has increased by about 3°C (that’s over 5°F).

Are the highest temperatures on the rise, as much as the average? The yearly hottest day surely is: 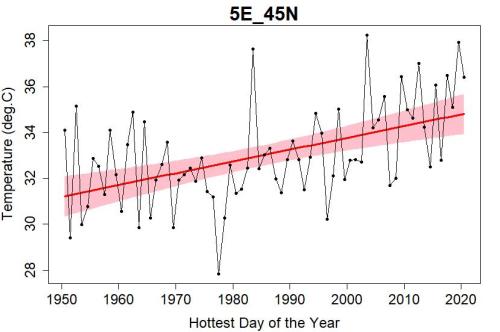 In fact, the distribution of temperatures has shifted to the right, not just its mean but its hot and cold wings as well, and while the 50-year period from 1950 to 2000 saw very little change, since 2000 this part of Europe has been in a wholly different regime: 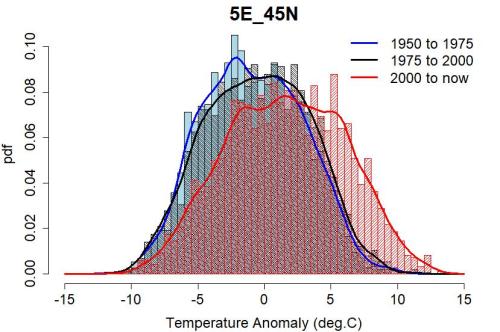 I also went looking for heat waves, or more correctly hot days, which I defined as any day over 90°F (32.2°C). For each year, I noted the number of “hot days” (those which exceeded the threshhold), as well as the “excess degrees,” i.e. the sum of degrees over 32.2°C for each hot day. The number of hot days per year has increased dramatically, from only about 1 per year in the 1950-1975 quarter-century, to over 9 per year since 2000.

I’m sure there are climate deniers in France near the Swiss border, and they’re trying very hard to persuade voters that all the heat waves have just been “natural variation” caused by a high-pressure dome. They might insist that all this talk about heat waves and man-made climate change really hurts the environment and undermines our society.

I’m also sure that in France near the Swiss border, it’s a pretty hard sell these days. It’s not the “statistical significance” which scientists talk so much about that makes voters sit up and take notice. It’s the pain the Pacific Northwest went through this year, and Europeans have endured again and again in the last few decadeds, that people remember.