Per capita, many of the places hardest hit by COVID-19 aren’t urban, but rural (blue circles mark areas with at least 50 cases per day per million population, red circles those with at least 100):

Note the swath of cases crossing the “bible belt” and the many clusters in the corn belt; COVID has arrived in the heartland. But the fact remains that urban areas — especially very large ones — are tinder-boxes for the epidemic. I’d like to take a look at five of the biggest counties listed in the data available from Johns Hopkins University, namely: New York City (NYC), Dallas, Miami, Los Angeles (LA), and Seattle.

I’ve adjusted the data in two ways. Some counts (daily new cases per million population) are ridiculously low, because their cases were not reported until a later day. In addition, there is a distinct weekly cycle (especially recently) which is also due to irregularities in reporting practices. I’ve attempted to compensate for both factors, somewhat crudely perhaps (I’m exploring better ways to go about it).

Without further ado, here are the “adjusted” counts for these five major urban areas:

I don’t have expertise in this area, but my intuition is that when the case load gets as high as 50 new cases per day per million population, it strains the health care system. Health care workers suffer, overworked and stressed with many cut off from their families. Experts warn politicians that it has to be dealt with. When the case load consistently exceeds 100, the system begins to break down and the quality of care suffers. Warnings can no longer be ignored.

During early April, NYC consistently recorded about 600 cases per day per million population. They have suffered far more than any of these other urban areas.

We can also plot them on a logarithmic scale: 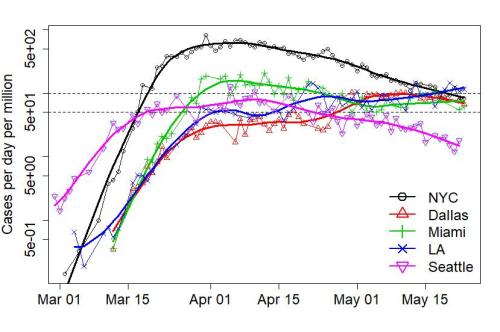 Now we can see that Seattle was the first to be hit, but was also the first to “bend the curve.” I attribute this to the wise administration and early preventive measures instituted by the Washington state government, under the leadership of governor Jay Inslee. In early March, Seattle was the “whipping boy” of COVID-19; today, it is the envy of urban areas which can only wish to get their case load that low. When the load is that much lower, there are sufficient resources to use tools like contact tracing to best effect. In other words, if you can get the case load low, you can keep it low.

By April 1st, NYC had taken the “lead” (to their peril) and Miami moved into 2nd place. Since then, cases have declined in Miami and dramatically in NYC, but in Dallas and LA they have hovered around the 50-100 level. I would rank all these cities’ performances as follows:

2nd: NYC Hardest hit, but responded strongly, and even though the caseload is only now dropping below 100, it is still dropping.

3rd: Miami They succeeded in escaping the over-100 danger zone, but they have slipped lately rather than continue decline (like NYC and Seattle).

4th: Dallas In early April they were well below 50, now they’re flirting with 100, and their long-term trend is still upward.

5th (meaning worst): LA They too show an upward long-term trend, and the caseload is going above 100, into the danger zone.

Thanks to all who have kindly donated to the blog. To help support this blog, please visit the donation link below.

This entry was posted in COVID-19 and tagged COVID-19. Bookmark the permalink.