Keep Lockdown, because YOU ARE SAVING LIVES

The news lately includes talk of the USA reaching a “plateau” in the spread of COVID-19. It’s based on incomplete and imperfect data (as has been pointed out by many), but the daily death toll is probably the best indicator and it has definitely stopped rising like it was during late March and early April: 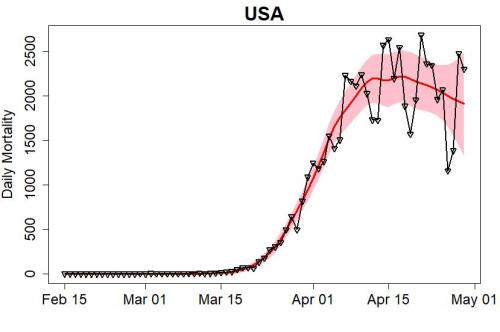 The reason: preventive measures like social distancing, masks, handwashing, lockdown, staying home, all the things people have been doing to protect themselves and others. Those things are working. Without those measures, the death toll would have kept rising and today, it would be horrific.

So: congratulate yourselves. YOU ARE SAVING LIVES.

We also see a “plateau” (if it can be called such) in the number of new cases per day: 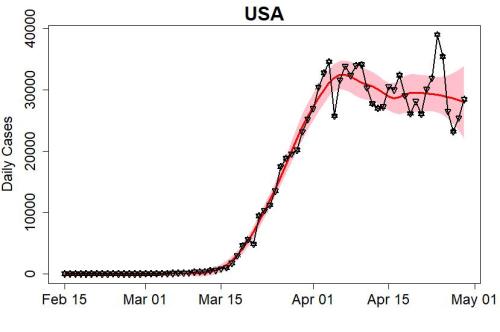 The data are less reliable than for mortality, but they also give us a “heads up” because illness precedes death; there’s a lag between new cases and new fatalities. And there are more cases, which means more samples, although irregularities in case counts are definitely there.

Nonetheless, let’s look at the number of new cases each day — just as in the last graph — but this time plotted on a logarithmic scale (note the numbers on the left-hand axis): 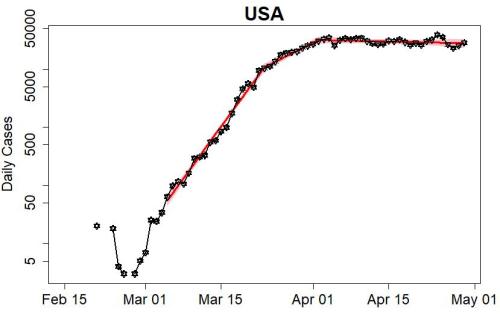 We see that from about March 5th until around Mar 23rd, it closely followed a straight line on a logarithmic plot — which means it showed exponential growth during that time span. This was the time that COVID-19 exploded in the USA.

Do bear in mind that there is a lag between infection and detection, so there’s a delay between when the disease spreads and when we see it spread, even in the caseload (and a further delay in the death toll).

From about the 23rd until near the 3rd of April, it slowed (at least, on a logarithmic plot). My hypothesis: this is when the social distancing measures started to “kick in” and that’s when the spread of COVID-19 slowed. But measures had just begun, and it was still spreading.

From around April 3rd onward, the case count has shown a “plateau” (if you want to call it that). My hypothesis: this is the result of widespread social distancing and other safety measures.

Despite the “plateau,” the numbers are still very high. That’s because we were so late implementing the prevention measures we have; the disease had time to spread and reach large numbers. The lockdown measures we have in place have stopped their growth — but new cases (and fatalities) have declined only very slowly if at all. We’re still seeing about 30,000 new cases a day, and around 2,000 deaths.

The virus first hit the U.S. on the west coast (the first reported death in Washington state), then invaded the east coast via massive international traffic through New York. It’s interesting to compare the daily case counts for the U.S.A. per million population, to the same for the states of Washington and New York: 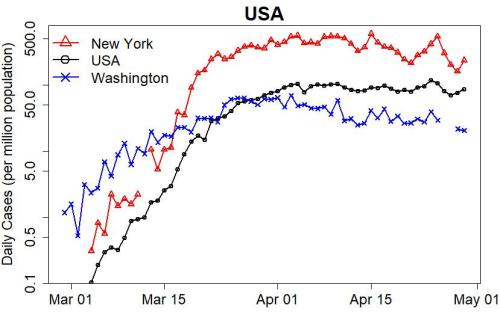 The crucial time for these states was the first three weeks of March. While the disease spread rapidly in New York, it grew slowly in Washington state so that by the time lock down really kicked in nationwide, Washington had kept the infection rate to 50 a day while New York struggled to stay below 500.

Once the disease gets going, it’s very hard to slow it down. Even though New York has done an excellent job, not just halting but actually slowing the disease, it has taken most of April to cut the new case rate in half, slow going indeed compared to early-to-mid March when it could double in only 3 or 4 days.

That’s why KEEPING LOCKDOWN is so important. Once the case load gets heavy, it takes a very long time to reduce it. If we relax our restrictions now and the disease takes off, we can’t put the genie back in the bottle. It’s a matter of life and death.

In case you’re wondering where the case load is growing right now, I estimate it’s where the upward-pointing black triangles are in this map: 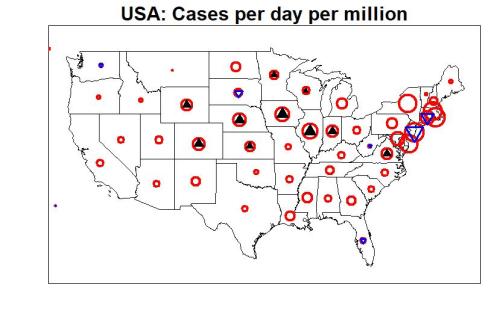 The “corn belt” seems to be in the line of fire.

This entry was posted in Global Warming and tagged COVID-19. Bookmark the permalink.

16 responses to “Keep Lockdown, because YOU ARE SAVING LIVES”