I’ve formed a gridded composite sea level estimate and I’d like to share it. It’s quite crude, but some compensation is necessary because a simple average of stations is dominated by Europe and North America, there are so many tide gauge stations there. My regional breakdown was a first step; this is the next.

I divided the world into 30° x 30° latitude-longitude grids, and within each, aligned all the tide gauge stations with at least 360 monthly values since the year 1900. Then I aligned all 47 grid series (which actually had data), area weighted, to get a global estimate: 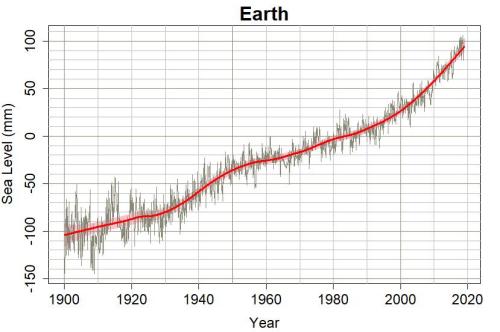 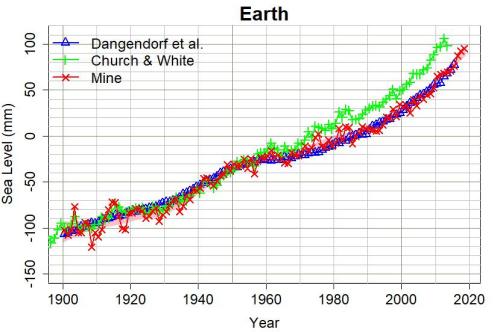 Here’s how the rate of sea level rise has changed (again, my estimate in red, Dangendorf et al. in blue, Church & White in green): 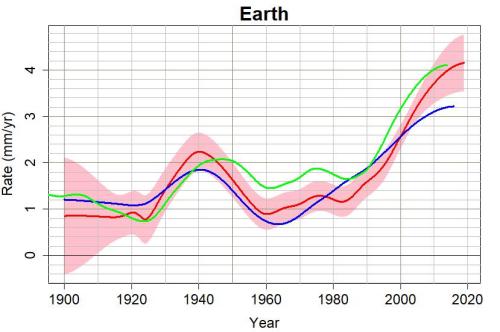 Of course I applied PCA to the residual series from the grids, and the first PC isolates the Arctic Ocean boundary. The second PC is again proportional to the el Niño pattern (el Niño index in red):

I’m pleased with the new gridded composite. It has some similarities to the Church & White data, some to Dangendorf et al., certainly all of them show an interesting pattern of rate changes throughout the 20th century, with the fastest rates of sea level rise being the most recent.

My new estimate is a toy, not a credible addition to the current research. But its utter simplicity while agreeing with the best published results, flatters both, especially my one possibly useful contribution, how to compensate for vertical land movement. And, it suggests that perhaps we’re converging on a more reliable history of sea level over the past century and more.

Thanks to everyone for very kind donations to the blog. If you’d like to help, please visit the donation link below.