Some organizations which estimate global temperature change have been behind schedule because of the U.S. government shutdown. But the folks at the Berkeley Earth Surface Temperature project have released their figures for December’s temperature, bringing the year 2018 to a close. It was a hot one. 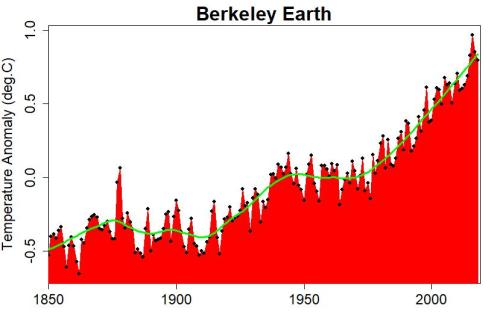 Last year was the 4th-hottest on record. Of course we already know that global temperature jitters around its trend value; it’s a combination of the trend, the long-term pattern, with the noise, i.e. the jittering around that never stops but never really gets anywhere. Welcome to Earth.

There are lots of ways to estimate what that elusive trend value is, an important task if we want to know how the underlying system is changing. The noise changes won’t tell us about that; whatever the climate does, noise will be noise. One often starts by using a smoothing method, some of us confess to enjoy geting fancy about that, and my “go-to” choice is a modified lowess smooth: 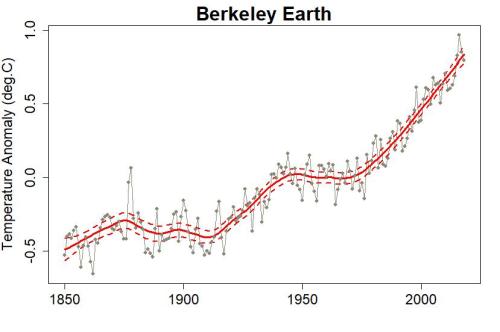 The thing about a smooth is that it has an inherent time scale. Changes that are much faster than that will get smoothed out, but changes slower than the time scale will be mostly unaffected. The idea is that the noise changes are fast, the signal changes are slower, so with the right time scale we can blunt the noise and let the signal shine through.

For my smooth (above) I used a time scale of 20 years. Climate is usually defined as 30 years or more, but I wanted a shorter time scale to pick up more fluctuations, since they’re not all noise! But I know from experience that with time scales shorter than 20 years, the noise will start to dominate the result and I’ll lose the very noise reduction we need to get signal out of data.

Even so, on any time scale the noise is still there. Allow me to demonstrate.

Let’s make some random noise, of the same size as the random noise in yearly global average temperature (about 0.1°C). In this case we know, ahead of time, what the signal is: it’s flat as a pancake, going nowhere. These data are only noise.

Now let’s smooth it. Well start with a choice which is popular with those who want to let the noise affect the results, because the time scale is too short: a 10-year Gaussian smooth:

The fluctuations cover a range of 0.14°C. Some (not Tamino, to be sure) might even claim there was global cooling of that amount from about 1950 to 1960. But we know these data are just noise.

What about my choice of lowess smooth at 20-year time scale? This:

This too shows fluctuations, covering a range of about 0.07°C. The noise is still there — and even though smoothing reduces the noise level, it doesn’t eliminate it completely. In this case, the noise is all there is.

The “smoothest” choice is a straight line fite:

There’s still noise, and it sill causes the smooth (the line) to cover a nonzero range, but in this case, at 0.007°C total, it really won’t bias our estimates of total change.

The model with the most noise reduction, but which still includes all the changes that we can actually demonstrate, is a piecewise linear model, i.e. a set of straight lines represening the espisodes of demonstrable global temperature change (not just the stuff that “looks like”). The times should be chosen to fit the data best (something called “changepoint analysis”), and I get this:

Using this model to estimate the trend changes (apart from the noise), the early warming amounted to about 0.39°C, but later warming covered 0.83°C, more than twice as much.

Still, some insist on nonsense: that early warming was “almost as large” as later warming. This is usually done without even estimating, let alone saying out loud, how much warming there was. When called to task, their acolytes will try to save appearances by using every trick imaginable to exaggerate what happened early while minimizing what happened late. They hope in vain that if they can pull the wool over people’s eyes about early warming, it will comfort them about recent warming. Recent warming is worrisome. The early global warming is no comfort at all.

What’s scary as hell is what’s to come … because that trend line isn’t just a lot higher than it used to be, it’s still going up.