We’ve spoken before (as have many before us) of the fact that climate isn’t just about the average, it’s about the whole distribution (the probability distribution if you want to get technical).

We also emphasized that the tails of the distribution — the probabilities for extreme values (very very cold or very very hot, if we’re talking about temperature) can change profoundly when we shift the distribution left or right, without otherwise changing its shape; we illustrated this with July temperature in Moscow:

It set me to wondering, how do things look down under?


I got daily data from the Australian Bureau of Meteorology for over 100 stations across the continent (their “ACORN” data set), and searched them for “very hot days.” I defined a “very hot day” as one with a high temperature of 100°F (37.78°F) or higher. I hope the Aussies can forgive me for using a definition based on an arbitarty choice (triple-digits) for an arcane (Fahrenheit) temperature scale … but Americans understand it, and few can argue that 100°F or higher makes for a very hot day.

I counted how many hot days occur each year, defining the “year” as July-through-June so that summer (Dec-Jan-Feb for southern hemisphererians) won’t be split across years. Then I fit a straight line by least squares, just to test whether or not there’s a trend and which way it’s going. To be eligible, I insisted that a station must have had at least 5 hot days since records began (for most stations, the year 1910).

Of the 102 eligible stations, 53 of them showed a linear trend at the 95% confidence level or better. Of course, some of them could be accidental; we’d expect about 5 such cases out of 102 stations just from randomness. Of the 53 stations with significant response, 51 showed an increase in the number of hot days, only 2 showed a decrease.

Just to give the “flavor” of a things, let’s look at a couple of spots with increasing hot days. First up: Canberra. Here’s the temperature anomaly (not temperature), to get an idea of how the trend has been going overall: 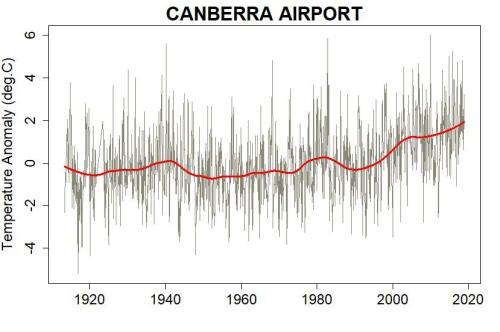 Of course I used temperature (not anomaly) to determine which days pass the “very hot” test, and simply counted the number per year. It gives this:

Very hot days used to happen less than once per year, now they’re more than twice as likely. And yes, the increase is statistically significant. [Technical note: the trend line in red isn’t a least-squares linear fit, it’s a quasipoisson regression.]

We can estimate the pdf (probability density function) with a histogram, and I’ll compare two different histograms: one in blue for data from 1950 through 1970, the other in red for data from 2000 to the present. I get this:

It looks a lot like the distribution shifted to the right, but didn’t change its shape. We also see that the extreme events (both hot and cold) have changed their probabilities profoundly; cold days are a lot less common, while hot days, in this case, anything over 24°C (75.2°F), are a lot more common.

We can zoom in on the region of most interest, hot temperatures:

The horizontal dashed line is at a probability of 0.002738, which is about 1/365 so at that probability it happens about once a year.

Canberra is hardly one of the “hottest” places in Australia. But it’s hot enough to reach uncomfortable, even dangerous levels during heat waves. Well … they’re happening more often, and they’re getting hotter.

We can do exactly the same analysis for a station which is in a very hot part of Australia, Alice Springs. Here are all the graphs; I’ll bet you can make sense of them: 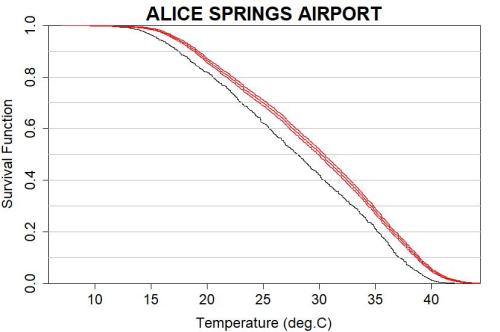 The number of very hot days each year (100°F or hotter) has nearly tripled. All temperature from 37°C (98.6°F) and above are more likely. Note that about once a year they would reach 41°C (105.8°F) or more, but these days about once a year they’ll make it up to 43°C (109.4°F). Not only have heat waves gotten more frequent and hotter, in places like Alice Springs they’re reaching extremely dangerous levels.

The science about heat waves in Australia is clear: hotter, longer, more. It’s not a “close call.” Australia is already one of the most vulnerable countries to heat waves; the trends bode ill for Aussies.

And … it’s going to get worse. Imagine the probability distribution shifted to even higher temperatures. Imagine when the number of very hot days doesn’t just increase, it doesn’t just double or triple, but at some locations becomes a year-round phenomenon. The more this happens, the less the land becomes liveable.

Let’s help our brothers and sisters in Australia. And the Kiwis in New Zealand, and the Pacific Island Nations. Let’s help ourselves. Putting a stop to carbon emissions is the way.

18 responses to “The Oz Heat Distribution”