Global Warming Comes to Your Town

Like most people, I live on land, not at sea. I even live in the northern hemisphere.

Global warming isn’t the same everywhere. In particular, it’s happening faster on land areas than over the oceans. While the globe as a whole is warming at a rate of around 1.7 to 1.8 °C/century over the last several decades, the land areas alone have been warming up more than 50% faster, at about 2.8 °C/century. And of course, not all land areas are warming at the same rate either. On the whole, the northern hemisphere land is warming faster than southern hemisphere land; here in the north we’re heating up at around 3.2 °C/century (for land areas, I like to use the data from the Berkeley Earth Surface Temperature project).

Berkeley Earth also provides gridded data, the temperature over in each small area (grid) of the land. I computed the warming rate since the year 1975, for each grid, and made a map of dots with red for warming and blue for cooling, bigger dots for faster warming or cooling. I got this.

There aren’t any blue dots.

We can get a better idea of where the warming is most, and where it’s least, by mapping not the warming rate, but its difference from average. Now, red dots are for those grids warming faster than average (faster than 2.8 °C/century), blue for those warming more slowly, and larger dots for bigger differences:

There are a lot of regional differences around the world, even on land, even in the northern hemisphere. The fastest warming is happening in the extreme north, pretty much all around the Arctic, while the slowest warming is in a region of Antarctica.

If you live in the conterminous U.S. like I do, it’s a mixed bag. Some places have warmed more slowly, some faster, on the whole the country is warming at about the worldwide land-only average. But we’ve got regional differences even within the USA. Here, for instance, are the warming rates (since 1975) for the 48 states of the conterminous U.S. (using data from NOAA, the National Oceanic and Atmospheric Administration): 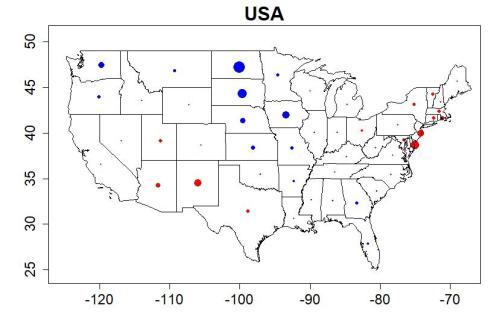 The story is the same we saw in the Berkeley data, that there are parts of the U.S, especially along the northwest and the middle of the country, warming more slowly, while others like the desert southwest and part of the eastern seaboard are warming faster.

One of the fastest-warming of the “lower 48” states since 1975 has been New Mexico:

The recent warming rate is well above the global land average, at 4.1 °C/century. If you want an area of the U.S. warming even faster, look to northernmost station, at Barrow, Alaska.

The red line shows an estimate of the trend based on a piecewise linear fit, with the turning point chosen by changepoint analysis. No other change can be confirmed statistically in these data. According to this statistical model, the present rate of warming at Barrow is up to 5.3 °C/century, and the trend has already risen by 2.3 °C since just 1974.

Of course there are plenty of fast-warming places to choose from not in the U.S. Europe is particularly hot, and not just in the far north but in more southern parts too. A giant area around the Mediterranian sea is filled with faster-than-average warming. A big part of China too, and most of north Africa.

The truth is, that even those land areas not warming as fast are feeling the pinch. Australia is heating up at a modest southern-hemisphere pace compared to the northern hemisphere, and was always known for heat and desert, but the warming they’ve seen already has brought them to new and very harmful territory. The heat waves and droughts they’ve endured in the past few decades make it a pointed issue for Aussies, both is cities and suburbs, and in farm territory were water is so important.

How will — how does — climate change affect your town? For some places, like the desert southwest, higher temperatures have brought more heat waves, and more soil evaporation to make drought considerably worse. That’s been one of the contributors to the increasing wildfire problem.

But in some spots, like south Florida, warming temperatures haven’t brought sweltering heat they can’t handle (not yet, at least) but other climate change effects have arrived. Tidal flooding has become such a problem that they’re spending half a billion dollars to keep the sea off the streets. The problem has spread up and down the U.S. east coast, and it’s only going to get worse. Or if you’re from Houston, climate change gave you a once-in-500-years flood for three years in a row. Or maybe you’re near the floods along the Mississippi river, or the path or hurricane Florence or Michael or Harvey or Maria.

Climate change is at your house already. There’s a pretty good chance it has already gifted you or someone you know with something you’d rather return for a full refund. Unfortunately, there’s always a fruitcake willing to tell us that it’s no problem.

7 responses to “Global Warming Comes to Your Town”