In the last post I defined the four regions of the U.S. east coast for which I’ve created a regional sea level estimate (since 1950). Northernmost is my New England (NE) region, which includes the coasts of Rhode Island and Connecticut, even the tip of Long Island: 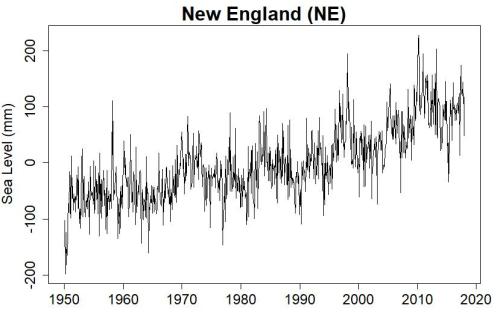 Interesting stuff, but at the monthly time scale there’s so much fluctuation it’s hard to see what’s going on. The information is still there of course, but it’s not always clear to the eye. A graph which may be more informative visually (but is certainly no more informative mathematically) is that of yearly averages rather than monthly averages:

Of course sea level is on the rise. But it’s not rising at a steady rate (i.e. following a straight line), there’s more than that going on. A simple way to show this is to fit a quadratic curve, a parabola; it’s strong statistical significance means we know right off the bat that it’s not just a linear trend plus noise.

Some of the better estimates of the actual trend are from a good smoothing method (I like the lowess smooth) and from a piecewise-linear fit, a function consisting of two straight lines which meet at their endpoints. These two strategies give similar estimates:

The piecewise linear fit has its “turning point” in 1990. The high quality of this fit doesn’t mean that the rate of sea level rise suddenly jumped to a higher level and has since held steady at that higher rate — even though that’s the basis for the piecewise linear model. What it really signifies is threefold: first, its statistical significance proves (again) that the trend is more than just a straight line; second, it shows that the “sudden jump to higher rate” model is at least approximately correct, i.e. there’s something to be learned from it; and third, it gives us an estimate of the average rate of sea level rise during the two disjoint periods, before and after the turning point.

The agreement is pretty good, but keep in mind the wise words of statistician George Box, that all models are wrong, some models are useful. Bottom line: the NE region has shown acceleration of sea level, acceleration which is substantial.