The 5 Most Important Data Sets of Climate Science

Back in July of 2008 Stefan Rahmstorf gave a presentation to the Arctic Expedition for Climate Action about “The 5 Most Important Data Sets of Climate Science.” You might disagree with his choice of “5 most important,” I might disagree myself, but they’re all certainly quite important. Of course, that was ten years ago; one might wonder, how have those data sets changed in the decade since?


One of them hasn’t changed at all, because his first choice was data from the Vostok ice core in Antarctica. 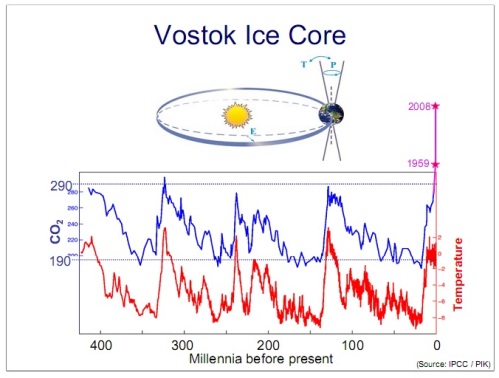 It reveals the up-and-down fluctuations of glacial cycles, and it also reveals the extreme correlation between temperature and atmospheric CO2.

The others are up-to-date data, and I’d like to show not just more recent measurements, but how they have changed compared to the trend we would have estimated from the data through 2007 (the last complete year when Rahmstorf gave his presentation). We’ll start with his second choice, modern measurements of CO2 in the air (sometimes called the “Keeling curve”): 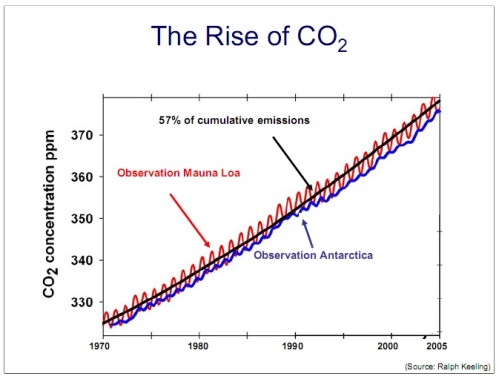 The red line shows monthly measurements taken at the Mauna Loa atmospheric observatory in Hawaii up to the year 2005, the blue line measurements taken in Antarctica. At that time, CO2 had almost reached 380 ppm (parts per million). Since then, we’ve seen this:

The red box surrounds the data available through 2007, and I’ve plotted yearly averages rather than monthly data. The blue line shows the trend estimated using the data from 2000 through 2007, and the red line is that same trend continued to the present. It’s obvious that CO2 is still rising, and seems to be going up even faster than it was during the 2000-2007 period. We’re now over 400 ppm.

The next choice was global average temperature:

It was definitely on the rise. Since then we’ve seen this:

Again, the red box surrounds the data avialable through 2007, the blue line is the trend from 1975 through 2007, and the red line is that same trend extended to the present. It has kept on rising. We’re now about 1.1°C above the value in 1900.

It was certainly going up. Since then:

The blue line is the trend from 1990 through 2007 and the red line is that same trend extended to the present. Not only has it kept rising, it’s been rising faster than before.

Rahmstorf’s final choice is Arctic sea ice extent during the month of September: 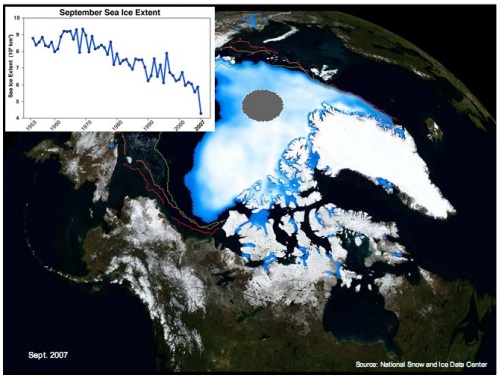 Personally, I might have chosen the yearly average sea ice extent rather than just the September values. Here’s what came after:

Every value from 2008 onward has been below the extended trend line (again shown as a red line). Some try to claim that it has stopped declining, based on ignoring what happened before 2007 and the lack of any statistical analysis — because the uncertainty is so great in a trend estimate of such a short time span, there’s no valid evidence of any slowdown. But there’s no doubt whatsoever that recent values have been worse than what would have been predicted by extending the existing trend.

What have we seen in the decade since Rahmstorf’s presentation? CO2 kept rising. Temperatures kept rising. Sea level kept going up. Arctic sea ice has dipped far below the existing trend.

All of this was predicted, by the same climate scientists who keep telling us that global warming is real, it’s man-made, and it’s dangerous. They predicted these things … and they turned out to be right.

Climate deniers keep trying to tell us that things are not going the way they are, that the bad stuff has “levelled off,” and that generally global warming has either stopped or reversed itself. They were saying the same things ten years ago. Subsequent data have proved them wrong.

Given that they have no valid statistical evidence of these trends improving, and that all their prognostications about “recovery” and “hiatus” and “improvement” (which they’ve been saying for over a decade now) turned out to be dead wrong … why would any sane person believe them now?