NOAA provides an excellent website for acquiring and examining sea level data from tide gauges. It includes maps with which one can select individual stations, but which also show the rate of sea level rise based on fitting a linear trend to all the available data. Here’s their map, zoomed in on the USA: 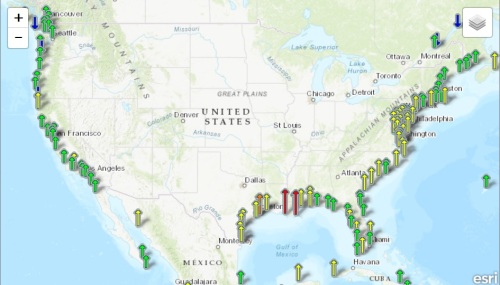 The lengths of the arrows corresponds to the sea level rise rate, and are color-coded as well. Those in green have rates from 0 to 3 mm/yr, those in yellow from 3 to 6 mm/yr, those in red higher than 6 mm/yr, and the blue indicates negative rates.

Note that local rates can be below zero even when global sea level is rising, because tide gauges show local sea level, and that includes both the change in the height of the sea surface and in the height of the land. The land height can change for many reasons. There’s glacial isostatic adjustment: when glaciers and ice sheets melt away the weight of the ice no longer presses down on the land, pushing it down, and the land itself will rebound (but very slowly). Earthquakes can change the height of the land. Extracting groundwater can do so too. All these effects contribute to vertical land movement (VLM).

I’ll create essentially the same map, but I’ll change the color coding so that blue is for rates from 0 to 3 mm/yr, red for rates from 3 to 6 mm/yr, and black for rates above 6 mm/yr. I’ll also plot fewer stations, because I want to focus on just those stations in the U.S. that have enough data to give a reasonable rate estimate recently (since 1990, although I’ll estimate rates using all the data). And here it is:

But there’s quite a lot of difference between stations, even within small regions. On the east coast, for instance, we see a lot of blue arrows (less than 3 mm/yr) and a lot of red ones too (3 to 6 mm/yr), even some black arrows (more than 6 mm/yr). There doesn’t seem to be much rhyme or reason to the differences, and one might be tempted to think that there are lots and lots of differences in vertical land movement, even for nearby stations, which would account for those differences.

But that’s not the only thing that can cause such differences, because these rate estimates come from fitting a straight line to all the available data. This means they represent the average rate of sea level rise during the entire time span of observations. But different tide gauges cover different time spans, so they’re not necessarily estimating the same thing. A station with data from 1950 through 1980 gives us the average rate 1950-1980, while one with data from 1990 to the present gives the average rate 1990-present. Those rates may not be the same (in fact they are not the same), even if two tide gauges are at the same location.

Climate deniers hate that. They want you to believe that global sea level has risen at a constant rate for the last 80 years or so at least, so they can deny the danger from even faster sea level rise in the near future. Also, the rate over the last 80 years or so has been less than the rate recently, so by claiming that there’s no “real” change they can make the claim that it isn’t even rising now as fast as it really is rising now. Perhaps the most scientifically accurate description of their approach would be: “total bullshit.”

I was interested in comparing the rates at different locations recently, based on a time span these tide gauges all share — at least, much more closely than using the entire time spans. So, I isolated the data from 1990 to the present to estimate the recent sea level rise rate. Stations will still show differences, even very nearby ones, since vertical land movement is a real phenomenon and really affects local sea level. But at least we’ll greatly reduce the differences caused by using (sometimes extremely) different time spans.

Using just the since-1990 data, and insisting on enough data to get a good estimate, I get this map:

Now the differences, especially on the east coast, are much reduced. Northern New England no longer stands out as having especially slower sea level rise than the rest of the eastern seaboard. This not only shows the greater consistency of sea level rise estimates at nearby locations, it also shows the importance of using a common time span for estimation if we want to know what those difference really are.

Differences remain. In particular, there are a few stations which “stick out like a sore thumb” and suggest that those locations are greatly affected by vertical land movement. The most consistent differences are the very high rates in the western Gulf of Mexico, with several stations in Texas and Lousiana showing rates greater than 6 mm/yr. It’s possible that this is due to changes in ocean currents in the western Gulf of Mexico, but I strongly suspect that it’s really a reflection of the impact of vertical land movement in those areas.

All this emphasizes that sea level rise is definitely higher than its rate over the last 80+ years; sea level really has accelerated, and the recent rate is probably the highest seen in many thousands of years. It also warns us about the U.S. east coast, a warning not to be taken lightly because the slowdown of the Gulf Stream system is one of the factors accelerating sea level rise in that region.

Again, climate deniers will deny this and claim that sea level has changed dramatically in the last few thousand years, a claim that should also be classified as “total bullshit.” They’re particularly eager to deny the reality of sea level rise because it’s one of the impacts of global warming which will cost trillions of dollars — Miami is already spending about half a billion dollars trying to keep the water out when “king tides” (the highest tides of the year) cause the streets to flood even with no storm, no wind, no rain. They can’t deny the cost without looking like idiots, they can’t deny it’s because of sea level rise without looking like idiots, so they deny the only thing they can: the truth, that it’s happening right now a lot faster than it was in the 20th century, and it’s very, very, very likely to rise even faster during the remainder of the 21st century.