The world has been getting hotter:

But — not all parts of it are heating up at the same rate. Temperature in the Arctic in particular is rising faster than the global average: 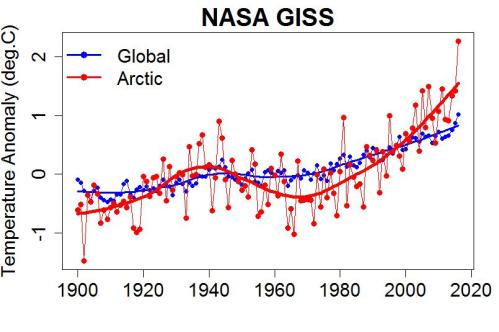 There are other data sets besides NASA’s, of course, and one which has made a particular effort to get the Arctic right is the data from Cowtan & Way, who used Kriging to estimate its changes. Their estimate of global temperature change since 1900 is, at 1.1 °C (2 °F), similar to NASA’s:

But their estimate of Arctic heating is considerably bigger:

More heat generally means less ice. This is rather obvious in the Arctic lately, as 6 out of 10 months so far this year have set new record lows for the extent of sea ice (2016 values shown in red): 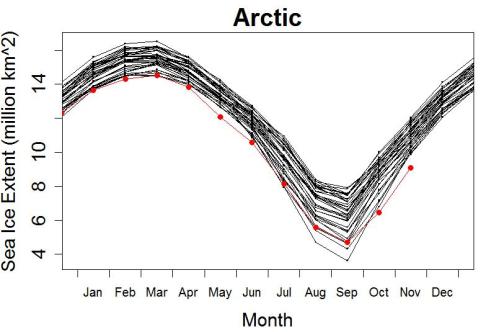 The extremity of the last couple of months might be even more visible in a plot of monthly average sea ice anomaly (the difference between the month’s value, and what’s “typical” for that month of the year):

An interesting consequence of the reduction of sea ice is that in the Arctic, it enables more heat to migrate from the ocean to the atmosphere. That decreases the air temperature contrast between the equator and the pole, and that weakens the polar vortex. When the Arctic polar vortex is weaker, Arctic air can migrate southward more easily; this allows warmer air into the Arctic and colder air out. When the cold Arctic air mass dips south, it can bring surprisingly frigid conditions. Not too long ago, the polar vortex allowed cold Arctic air into Siberia — but now it has reached down to north America and we’re shivering through cold conditions because of it.

It’s one of those surprising things, that global warming can make some places colder sometimes. It’s not happening globally — the heat that the U.S. wishes it had right now has invaded the Arctic. But it is commonplace for climate deniers to take any outbreak of cold, anywhere, anytime, and offer it up as evidence against global warming … even when it’s because of global warming. Some who do so are simply opportunists, taking advantage of the simple-minded, while some of them are the simpleminded; anything requiring a hint of “take a moment and think about that” is just too much for them to handle.

Although things like temperature and sea ice extent will always show fluctuations (just because climate changes doesn’t mean we won’t still have weather), they will also continue to show dangerous trends. In the long run, we’ll keep burning fossil fuels, the amount of greenhouse gases in the atmosphere will continue to increase, the globe will continue to heat up, Arctic sea ice will continue to decline.

The longer deniers succeed in delaying action, the worse it will be for our kids. Fortunately, they’re a lot smarter and more courageous than climate deniers give ’em credit for.