You may recall when I posted about flooding from high tide alone, even without storm surge or rainfall. It’s because of sea level rise. No doubt. It’s getting worse. No doubt.


I pointed out that it isn’t just a problem for Miami (although it is a huge problem for Miami). It’s a problem all up and down the east coast of the U.S. I chose Boston as an example, and that inspired Richard Ray at Goddard Space Flight Center to take a much closer look. As a result, we are co-authors of a paper on the topic.

As I say, it’s not just Miami and Boston, it’s lots of places. Yesterday’s “supermoon” exagerrated the effect, because the moon was especially close to the Earth so its gravitational influence was stronger than usual. Minor flooding followed, from Miami to Maine — here are some pictures of flooded streets in Portland, ME (from the Portland Press-Herald): 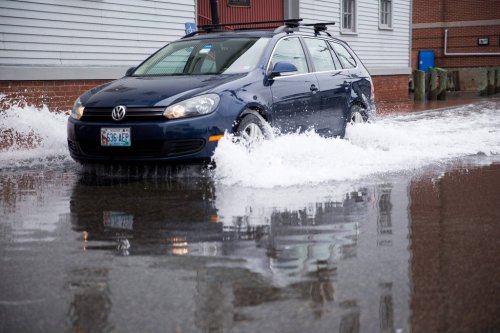 What’s happened so far is usually referred to as “nuisance flooding.” That’s not because it isn’t serious, just because it usually isn’t life-threatening. But the economic damage is considerable — when your restaurant floods, or your home, or your car is damaged, it costs big money. Miami is already spending $500 million (yes, half a billion dollars) just trying to “keep up” with the rising seas.

And as I’ve said many times, it’s going to get worse. Not just in Miami and Boston and Portland, ME, but around the world. Humans live near the sea, and for thousands of years the level of the ocean’s waters has changed only imperceptibly … now it’s changing, not just perceptibly, but threateningly. I repeat, the economic damage is considerable.

In spite of the obvious threat, the damage that’s already here, most of our government has turned a blind eye. Even in Florida, where the people of the Miami area are begging for help from a state government that is supposed to protect and serve, the governor (Rick Scott) is in deep denial. At one point, he even instructed members of his department of environmental protection not even to utter the words “global warming” or “climate change.” Governor Scott denies that, but I don’t believe him.

This much is certain: the state which might be hardest hit by sea level rise has a governor who refuses to accept the reality — just when the people of Florida most need to face reality and do something about it.

And as I’ve said many times, it’s going to get worse. Our actions today can’t prevent that, but how much worse it gets depends very much on what we do today. As long as Rick Scott remains governor of Florida, as long as Donald Trump remains president of the U.S., don’t expect our own government to help our own people.