A new paper in Science bears the innocuous title Climate change: The 2015 Paris Agreement thresholds and Mediterranean basin ecosystems [Guiot & Cramer, Science, 354(6311), 465-468, DOI:10.1126/science.aah5015], but comes to the disturbing conclusion that if the world exceeds the 1.5°C threshold, much of the Mediterranean region will not be able to sustain the ecosystem in which it has thrived for 10,000 years. In particular, it may suffer from reduced rainfall and see now-fertile land turn into extensive desert.


Reduce rainfall isn’t the only factor influencing drought and desertification. So too is plain old heat; rising temperature increases evaporation and dries out the land, making droughts which come to pass more severe. When the two factors combine, less water coming in and more evaporating away, desert can replace what was once green. 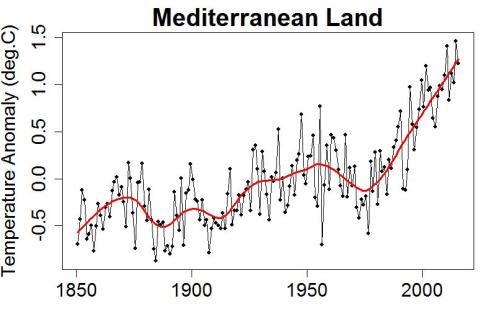 When compared to the world as a whole, we find that this region is warming faster even than the globe’s land areas: 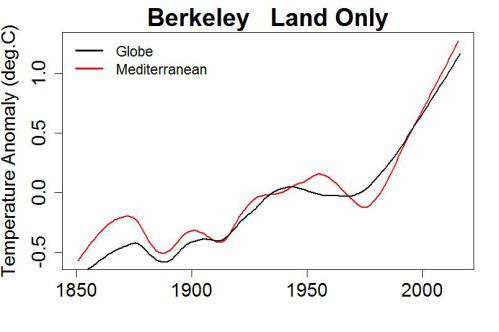 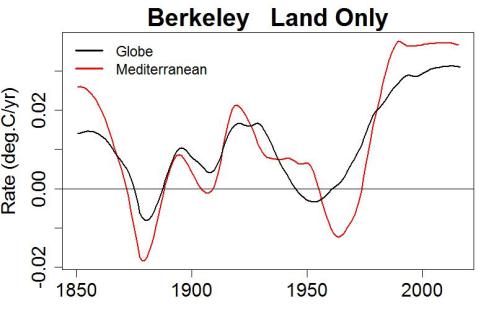 Even without a decline in rainfall, the region will suffer mightily from temperature increase. The expectation of too little water makes the situation genuinely frightening, and that’s the prospect the abstract makes clear:

The United Nations Framework Convention on Climate Change Paris Agreement of December 2015 aims to maintain the global average warming well below 2°C above the preindustrial level. In the Mediterranean basin, recent pollen-based reconstructions of climate and ecosystem variability over the past 10,000 years provide insights regarding the implications of warming thresholds for biodiversity and land-use potential. We compare scenarios of climate-driven future change in land ecosystems with reconstructed ecosystem dynamics during the past 10,000 years. Only a 1.5°C warming scenario permits ecosystems to remain within the Holocene variability. At or above 2°C of warming, climatic change will generate Mediterranean land ecosystem changes that are unmatched in the Holocene, a period characterized by recurring precipitation deficits rather than temperature anomalies.

There’s something about the phrase “unmatched in the Holocene” that I find quite worrisome.