Arctic sea ice has been flirting with record lows all winter long, and many days has actually plunged below previous records. But now, it seems to be going even lower. 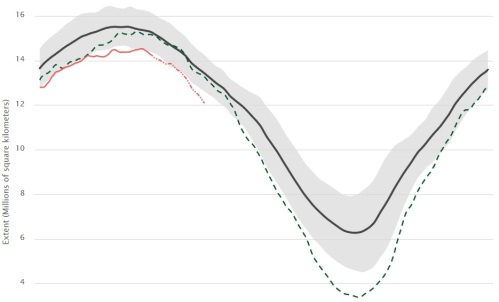 As for JAXA data, it shows the recent dive quite prominently (in red): 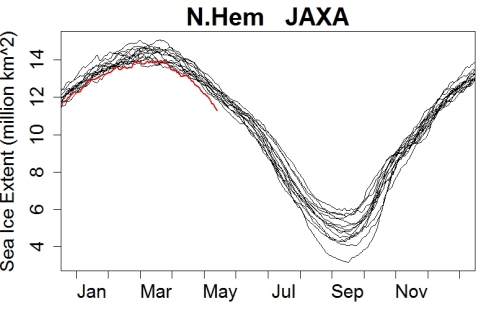 It’s also evident in anomaly values (with the seasonal cycle removed, using the entire time span as a baseline): 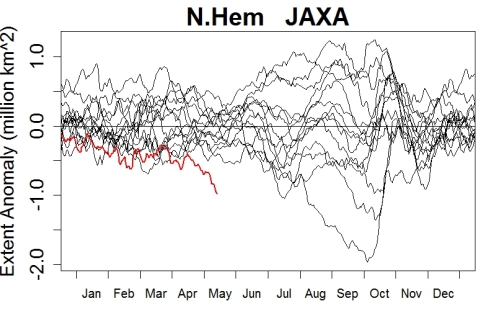 JAXA data don’t start until 2002, but we can get a more complete record by aligning it with NSIDC data the same we we did before. Then the sea ice extent looks like this: 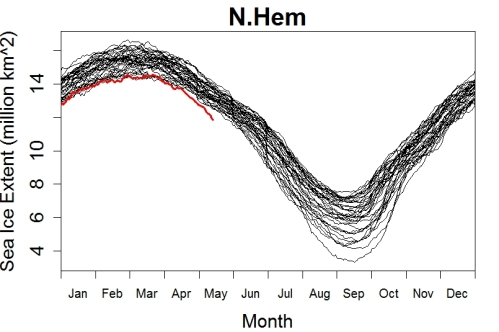 Anomaly values are here (again using the entire time span as a baseline): 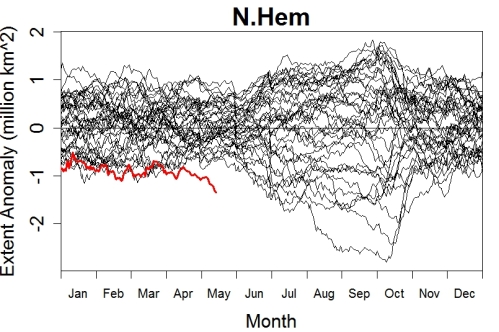 Any way you look at it, Arctic sea ice during May has fallen far below previous May values.

We won’t know until September just how low it will go this year. In the past, the correlation between May extent and the annual minimum hasn’t been very strong (beyond the overall downward trend over the years), but then, we haven’t seen May extent go this low, or this far below previous values, either. Whether or not this May’s Arctic sea ice nosedive is a harbinger of things to come, remains to be seen.

This much is sure: Arctic sea ice is disappearing, not just in summer/fall, but all through the year. The astoundingly high temperatures in the Arctic this winter are likely part of the reason for the extremely low sea ice extent. And, with so much more area exposed to the sun which is open ocean rather than highly reflective ice (a million square kilometers or so), yet more heat will be absorbed in the Arctic and temperatures may rise even higher.

It also remains to be seen how the extreme low May sea ice will affect patterns of atmospheric circulation. It has been argued that we’re already seeing major changes to circulation patterns because of the decline of sea ice, and the recent change might make that effect more prominent.

Which puts us in the midst of a climate experiment on a grand scale. Unfortunately, all of humanity is stuck in the same “test tube” along with all of life on earth. This kind of uncontrolled experiment seems to me to be far too great a risk, for no reason other than our inability even to listen to the dire warnings climate scientists have been issuing for decades, let alone to heed those warnings.