NASA has released data for global temperature this March, and it’s a scorcher: the 2nd-hottest temperature anomaly on record, and the hottest March. 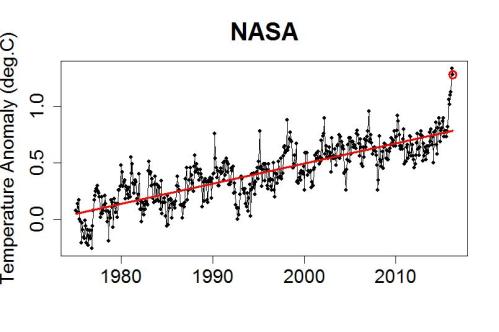 The latest value is circled in red.

This isn’t just an extremely hot value, it’s one of a string we’ve seen recently. In part, that’s because of the strong el Niño we’ve gone through, which raises global surface temperature. We’ve had strong el Niño events before, but they’ve never brought temperatures even close to what we’re seeing now. That’s because of global warming. When the increased trend of global warming combines with the increased fluctuation due to el Niño — when worlds collide — that’s when we set records far above what’s been seen, records like we’re seeing now.

It’s because of the string of extremely hot months that we’ve also reached the hottest 12-month running average on record: 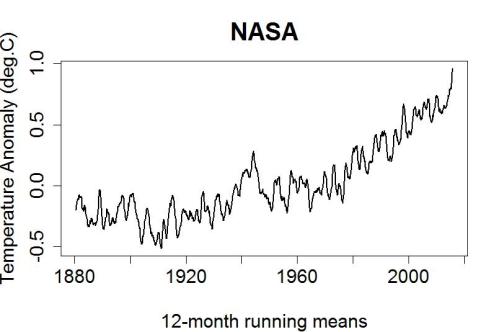 Not only is this the hottest March recorded:

March was indeed a scorcher, but just one of many recently.

Sooner or later, the influence of el Niño will subside. Then temperatures will decline, but they’ll still be way hotter than we saw in the 20th century. The record-breakers will come and go, and come again … but the heat is here to stay. Its effects are here to stay, effects like sea level rise flooding the streets of Miami, extreme heat waves killing thousands and destroying crops, droughts getting more severe and floods getting more severe. We already need to cope with those things, and we’d better be prepared for them to get more and more extreme.

The problems of global warming are already upon us. Things are going to get worse, but in the long term, it’s crucial to do what we can so that we can limit how much worse. What we’re already locked into is bad enough; if we allow the greenhouse problem to go unchecked, nobody knows how terrible it can be. Truth is, nobody wants to know … not by experience.