Surprise, but not Shock

The extremity of global temperature anomaly in February this year has shocked some people:

But — I have an explanation which downgrades the “shock” to mere “surprise.”

Of course global temperature has a trend, and of course it also shows fluctuations. Thing is, some of the fluctuations have known causes: el Niño, volcanic eruptions, solar fluctuations. Other temperature variations also occur, and are added to those due to known factors.

My regular readers know that I’ve adjusted temperature for known factors before. Let’s do so again, this time including data through February 2016.

Here’s the data (black line) together with the model (red line) based on el Niño, volcanic eruptions, solar fluctuations, and a simple (piecewise linear) trend for global warming: 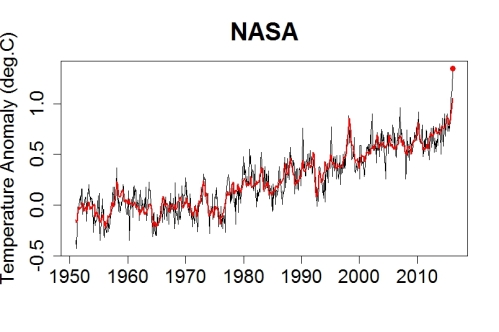 The known factors account for much of this year’s increase, but not all of it. Here are the residuals:

Now we can see that in terms of the fluctuations not due to known factors, February’s value is definitely up there, but by no means shockingly so.

We can see the same thing if we plot adjusted data, with the estimated influence of known factors removed:

The blue line is a piecewise linear fit to the adjusted data, the red line is a lowess smooth (hard to see because the blue line is on top of most of it). Again, February is high enough to be a surprise, but not a shock.

Whether or not the most recent months are the harbinger of a “tectonic shift” in the global warming trend, remains to be seen. But the evidence for that isn’t in yet. The recent extraordinary heat could well be, I might even say probably is, a continuation of the present trend plus extra-hot fluctuations from both known and unknown factors.

Which doesn’t mean there’s no cause for alarm. The present trend is plenty alarming.

38 responses to “Surprise, but not Shock”