This TED talk is amazingly good. It’s a beacon of realistic optimism in the struggle to fix the climate crisis. Watch it on youtube, or watch it here:

A new paper by Fyfe et al. speaks with apparent certainty of a “slowdown” in the rise of global mean surface temperature (GMST). What it doesn’t give is any real evidence of it.

END_OF_DOCUMENT_TOKEN_TO_BE_REPLACED

NASA has released their temperature data for January of 2016, and this month came in as the hottest monthly temperature anomaly on record 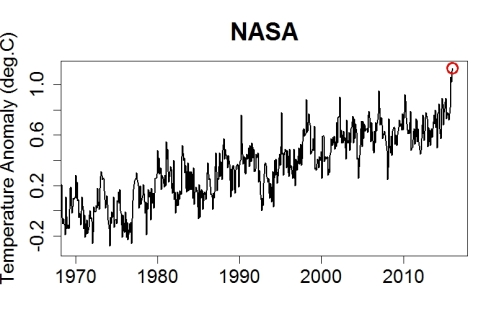 If you like this, feel free to donate at Peaseblossom’s Closet.

Heat is a form of energy, but it’s certainly not the only one; there are so many I won’t bother you with a list. In any complex system — an automobile engine, the human body, planet Earth — energy is constantly changing from one form into another, so if some object has energy (and it always does), sooner or later that energy will distribute itself among the various available forms. Since one of those is heat, in general terms when you gain energy you’ll end up with more heat, when you lose energy, there’s less of it to go around and that means less can be heat.

Another important form of energy is electromagnetic waves. It’s a fancy science term but in at least one form it’s something we’re all familiar with: light. More generically we can call it radiation.

END_OF_DOCUMENT_TOKEN_TO_BE_REPLACED

Ted Cruz has recently been asked, by voters no less, why he denies global warming. His response has been to double down — nay, triple and quadruple down — on denial. His standard answer is a litany of idiotic denier memes, moronic talking points that are so easily refuted they can’t possibly appeal to anyone with half a brain and a smidgen of actual knowledge. If you’re in denial yourself, Ted Cruz sounds great; confident, fast-talking, all the right buzzwords, insults for your most reviled targets. But if you know the least bit of the truth about global warming, it’s far too obvious how full of baloney he is.

It raises a fascinating question: why is Ted Cruz (like so many others) in such extreme denial, and more to the point, why does he not only admit it, but flaunt it? Why not do like Marco Rubio and Jeb Bush, play the “I’m not a scientist” card and fall back on that other zombie lie — the “ruin the economy” lie, the one that isn’t just false, it’s the opposite of true?

END_OF_DOCUMENT_TOKEN_TO_BE_REPLACED

One of the loudest and longest criticisms of U.S. (and other) temperature data is that the raw data are adjusted to compensate for non-climate factors, so we can better identify the changes due to climate factors (which is, after all, what we really want to know).

All the adjustment procedures are well documented, programs, raw and adjusted data are publicly available, but deniers continue to imply either total incompetence or, far too often, outright fraud — that adjustments only exist to exaggerate warming trends. In truth, adjustments exist to make the data better.

END_OF_DOCUMENT_TOKEN_TO_BE_REPLACED

Open Mind
Create a free website or blog at WordPress.com.