I recently showed a version of “el Niño-Corrected” temperature from Gavin Schmidt at NASA. My own calculation suggested that el Niño caused about the same contribution to 2015’s heat as Gavin’s estimate. However, there are some pronounced differences between our calculations.

My corrected data show a lot less wiggling around. For example, my correction accounts for the 1998 heat nicely, showing that its extremity was entirely due to el Niño, while Gavin’s still has 1998 well above the trend line even after correction. Also, mine doesn’t show some of the dips in Gavin’s curve, such as the extreme cooling in 1992.

There are two reasons for the differences. One is that I’ve used a more complex model of the el Niño effect, one which matches the 1998 outburst (and others too) much better. The other is that I’ve corrected for more than just el Niño; I’ve adjusted for solar variations and volcanic aerosols too, so my correction removes the 1992 dip which was because of the eruption of the Mt. Pinatubo volcano. The result of correcting for three factors instead of just one, and of a more sophisticated el Niño correction, is a much steadier warming for about the last forty years. We can see this more clearly by plotting just the corrected data (black lines are a piecewise-linear fit by change-point analysis): 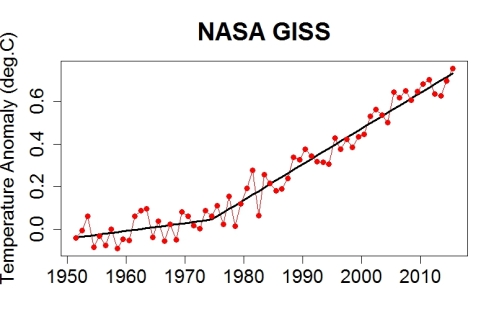 I’ve performed the same calculation for the other main surface temperature data sets. Here are the results for data from NOAA: 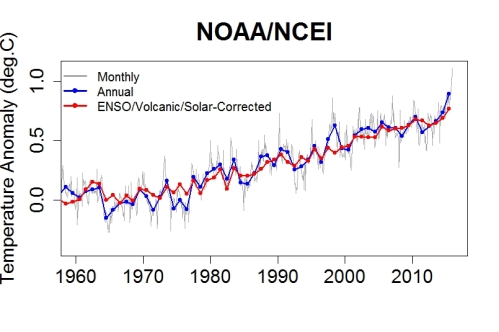 Here they are for data from the Hadley Centre/Climate Research Unit in the U.K.:

Finally, for the estimate from Cowtan & Way:

The corrected data sets have some things in common. They all still have 2015 as the hottest year on record, despite having removed the el Niño impact effectively. After correction, only the NOAA data still show 2014 as being 2nd-hottest. Most important, they all make claims of a “pause” or “hiatus” in global warming look even more silly than we already knew they were.

When it comes to preparing for the climate change to come, it’s the 2015 heat that tells the most important tale. But when it comes to denier propaganda, the big story is that the 1998 mega-heat really was due to el Niño, and with that factor accounted for 1998 is shown to be just another year on the trend line, part of the continuing march of temperatures upward.

If 2016 shows a similar outburst (as it well may), expect it to awaken many people to the reality and risk of man-made climate change. But you should also expect it to revive the deniers when, a few years later, they begin to crow about how its mega-heat was the end of global warming. It’ll be the 1998 story all over again — not the end of global warming, just a lot of extra heat from el Niño and a lot of hot air from the usual suspects.

18 responses to “Correcting for more than just el Niño”