Most atoms love to get together with other atoms. They don’t just want to get next to each other, they yearn to bond with other atoms. Not all of them do; there’s a class of elements called noble gases which are nature’s loners, their desire is to remain aloof. But there are only six of those [seven if you include Ununoctium, which doesn’t occur naturally but we’ve synthesized with nuclear reactions]; most elements really want to bond with others.

For maximum energy, you want bonds that have the most bond energy. You might have two hydrogen atoms bonded into a hydrogen molecule (H2), and two chlorine atoms bonded into a chlorine molecule (Cl2), but if you break them apart, then join each hydrogen to each chlorine, you’ll have two molecules of hydrogen chloride (HCl), a.k.a. hydrochloric acid. We can write this as a chemical reaction

Some atoms aren’t satisfied with just one bond; oxygen, for instance, wants two. It will bond with two hydrogen atoms to form a molecule of water (H2O). Each hydrogen has only one bond (with the oxygen), the oxygen has two bonds (one with each hydrogen), so they’re all happy in their little menage a trois. Oxygen can bond with a single other oxygen to form an oxygen molecule (O2), but to satisfy their 2-bond desire they form a double bond. Then each oxygen has two bonds, and together they’re satisfied.

Oxygen is content double-bonded to another oxygen, but it would rather single-bond to a pair of hydrogens. If you take an oxygen molecule (O2), and add two hydrogen molecules (2H2), both of the hydrogens will break up and so will the oxygen, then they’ll re-combine to form a pair of water molecules. When all is said and done, the total bond energy is more, so energy is released. In chemical reaction form it looks like this:

This process is called burning hydrogen, and the energy released can be directed to something useful (in a hydrogen-powered car, for instance) or can run amok (when hydrogen explodes). Burning is the process of bonding with oxygen.

Oxygen gets around; it really wants to bond with different types of atoms, and it’s willing to break up other bonds to get those atoms. It happens a lot; oxygen is the “homewrecker” of the molecular world, and it’s not satisfied with a single bond — it needs two.

One way to satisfy carbon is to give it four hydrogens. Each H gets a single bond (to the carbon) and the C gets four bonds (to the four hydrogens), so everybody’s happy. The result is methane (CH4), the main component of natural gas.

Then along comes a pair of oxygen molecules (2 O2). They break up into four oxygen atoms, which (homewreckers that they are) rip the CH4 apart. The four H join with two of the O to make a pair of water molecules (2 H2O). The C joins with the other two O to make carbon dioxide (CO2). The C needs four bonds, so it actually makes double bonds with each O. In reaction form,

Everybody’s happy, and the bond energy is big so a lot of energy gets released. That’s why natural gas (mainly methane, CH4) makes such a high-energy fuel. In practical applications the needed oxygen is easy to come by, it’s hanging around all the time in the atmosphere.

What happens to the stuff on the right hand side of the arrow, the CO2 and 2 H2O byproducts of the reaction? We usually do the cheapest thing we can with the byproducts: dump them in the atmosphere.

The water enters the atmosphere in gaseous form, as water vapor. But water so easily changes from gas to liquid that it soon leaves the sky as rain, ice, snow, fog, or dew. The carbon dioxide, on the other hand, hangs around for a long long time. Some of it dissolves in seawater, which in a way is a “carbonated soda” (but don’t drink it). Some is taken up by plants, because they want the carbon. But only about half enters the ocean or the biosphere; the other half (a little more, actually) of the CO2 we emit stays in the air. Hundreds of years. That’s why, ever since we started burning carbon-based fuels in the industrial revolution, the amount of CO2 in the air has been going up. A lot.

Methane isn’t the only thing we burn for fuel. We’ll burn almost anything, especially what’s cheap, convenient, powerful, and available. We started long ago with wood, then coal, then began an ever-increasing exploitation of oil and all its derivatives. These days we burn a multitude of fuels — from wood to whale oil, from propane(C3H8) in the grill to butane (C4H10) in the lighter, from octane (C8H14) in your gas tank to ethanol (C2H6O) in your gas tank. What they all have in common, including the wood, is carbon.

Most of the carbon-based fuels we use today are from ancient sources; they’re not just buried they’re fossilized. The carbon compounds in coal, oil, and natural gas are the products of plant matter being buried for millions of years. We call it fossil fuel and there’s a lot of it. We have more than enough to double, even quadruple the amount of CO2 in the atmosphere.

If you plucked a million gas molecules out of the air at random, about 400 of them would be CO2. The scientific way to say this is that the atmospheric concentration of CO2 is 400 ppmv, where “ppmv”stands for “parts per million by volume.”

It wasn’t always that way. Before the industrial revolution CO2 in the air was about 280 ppmv. We know this because in polar regions there are huge ice sheets where ice has been accumulating for many thousands of years. It begins as snow, which then compacts tighter and tighter, eventually being pressed into solid ice. As it does, bubbles of air get trapped within the ice. These days, we can drill cores through the ice, extract the trapped air bubbles, and analyze them to see what the atmosphere was like long ago. The deeper the ice, the longer ago it was laid down, the older the trapped air bubbles.

We can analyze modern air by taking a sample from any location on Earth. We’ve been doing that since 1958, when Charles Keeling started monitoring atmospheric CO2 as part of the International Geophysical Year (IGY). We’ve measured it regularly ever since, in fact today we monitor CO2 at hundreds of places around the world, but the longest record is from the Mauna Loa Atmospheric Observatory in Hawaii.

Here’s the concentration of CO2 over the last thousand years:

Old values (before 1958) are based on air trapped in the ice at Law Dome in Antarctica, new values (after 1958) are from continuous monitoring at Mauna Loa. Notice that it was steady, fluctuating only a little, for most of the last thousand years. It took a dip around the year 1600, but only a bit, some 5 or 6 ppmv.

The industrial revolution in 1750 started us on a new path. At first CO2 rose just a little, regaining the 5 or 6 ppmv reduction. About 1850 it really took off, and by 1950 was rising rapidly. Nowadays, we emit about 33 gigatonnes (billion metric tons) of CO2 into the air each year, which is enough to raise the atmospheric amount by about 2 ppmv.

Continuous monitoring since 1958 gives us a sharper image of the changes: 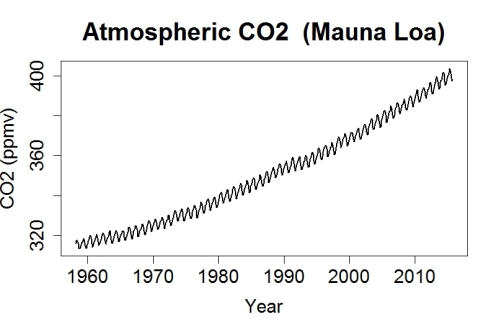 Regular up-and-down squiggles every year are plain to see. This happens because most of the world’s land plants are in the northern hemisphere (because most of the world’s land is in the northern hemisphere). During northern spring and summer plants grow, and they get the carbon they need by taking CO2 from the air. In autumn and winter plants decay and rot, returning it. The spring/summer withdrawal and autumn/winter return of CO2 is a visible sign of the plant world “breathing” CO2 in and out.

The important thing is that CO2 is still going up, at about 2 ppmv per year. Pre-industrial was 280, we’re now at 400, another 160 will bring us to 560, which is double the pre-industrial value. If we keep going at 2 ppmv per year, we’ll reach that milestone in another 80 years.

Carbon dioxide isn’t the only gas we’ve added to the atmosphere. Methane itself is present in small amounts; out of a million air molecules picked at random, only about two would be methane.

It didn’t used to be that way either. Before civilization itself, the concentration of methane was less than 1 ppmv. But methane is produced by the cultivation of rice, which has been going on for thousands of years. It’s also produced by cattle, which we’ve been husbanding in large numbers [contrary to popular myth, cattle don’t fart methane, they belch it]. When we mine natural gas, and when we transport it by pipeline, some of the methane leaks into the atmosphere. The result is, we’ve already more than doubled the atmosphere’s CH4.

Some gases, like chloroflourocarbons (CFCs), didn’t even exist in the atmosphere until we started emitting them. We’ve increased many atmospheric gases by a lot, and a lot of them have something in common: they’re greenhouse gases.

What, you might wonder, is a greenhouse gas? It’s a gas which makes Earth warmer by reducing how effectively it can cool itself off. How it does that is a story for another day.