It’s been a while since the University of Colorado updated their satellite-based sea level data. But there’s a more recent update from AVISO.

What can one expect to have happened most recently? There’s been a lot of rainfall, which can move water from ocean to land and lower sea level. But there’s also an ongoing el Niño which tends to be associated with enhanced sea level. There’s also the fact that in the last few years, melt from the Greenland ice sheet has taken off like a bat out of hell. Of course, those fluctuations will be on top of the continuing sea level rise due to global warming. Here’s the data: 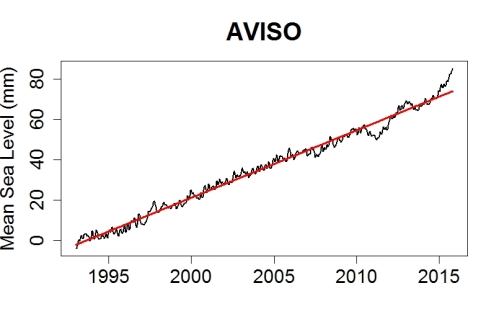 The red line is a linear fit to the data, showing that the recent uptick is quite pronounced. We can make it more visually plain by subtracting the straight-line fit from the data to show de-trended sea level, and I’ll fit a smooth to that as well: 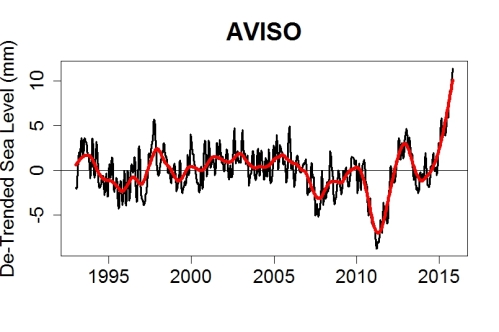 It looks like temperature isn’t the only thing that rose dramatically during 2015. The recent speed-up of sea level rise is notable, but it’s only been in place about a year, so it’s too early to tell whether this represents a genuine acceleration of the trend, or a temporary fluctuation. But it does represent a full centimeter of sea level rise we didn’t have before. We’ve already seen that coastal cities can be flooded from very high tides, without the need for storms or wind or rain — and every millimeter of sea level makes that more frequent and more severe.

Which makes one wonder — which cost of global warming will emerge as the most costly? Will it be the flooding from torrential rainfall like we’ve seen in England? Wildfires such as hit Washington state last summer? Deadly heat waves like those that killed thousands in India and Pakistan last summer? Drought like that California hopes to recover from? Cyclones — like the two which bucked the odds and hit in January(!!!), one in the Pacific and one in the Atlantic?

Or will it simply be the slow creeping rise of the sea?

34 responses to “Higher and Higher”