What they actually report is the ratio of oxygen to nitrogen in the air. This can be roughly converted to O2 concentration in parts per million by volume (ppmv), but there are some complications which I won’t go into. I’m just going to convert their reported O2/N2 ratio changes (in “permeg”) to O2 change (in ppmv) by a simple ratio, and ignore the complications — after all, this is just a quick look.

Without further ado, here’s what O2 has done since they started monitoring in 1989, through mid-2013 (roughly, it’s the change since about 1985), measured at the Mauna Loa atmospheric observatory in Hawaii: 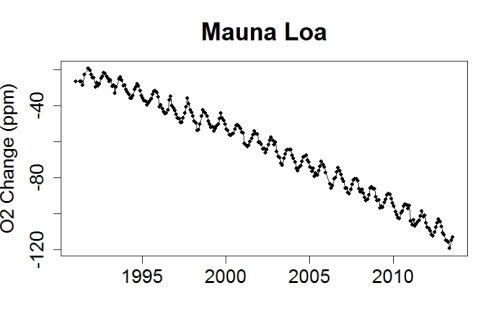 Just as CO2 shows an annual cycle due to the respiration of land plants, so too does O2. We can remove that annual cycle to define de-seasonalized O2 concentration: 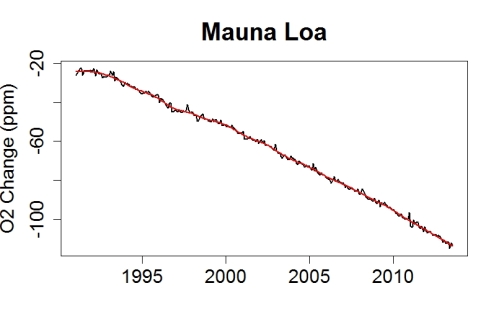 Let’s try something interesting. We’ll remove the linear trend from both O2 and CO2, and scale the O2 so that it “predicts” the CO2 change. For prediction, we’ll use O2 as a proxy for emissions, and suppose that the airborne fraction of the emitted CO2 (the fraction that stays in the atmosphere, rather than being absorbed by the oceans or biosphere) is 46% (a figure I estimated by regressing CO2 increase against O2 decrease). Comparing the observed CO2 change (with the linear trend removed) to the predicted CO2 change (with the linear trend removed), we get this: 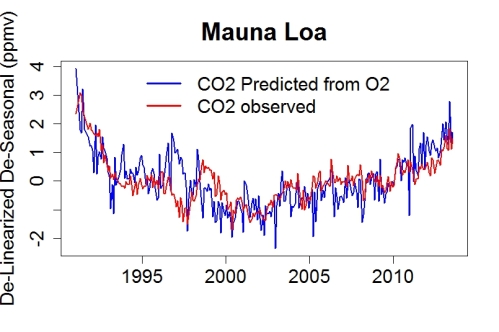 I draw two conclusions from this. First, the rate of CO2 increase is accelerating (which we saw in the last post) and the rate of O2 decrease is too. Second, I don’t see any evidence for a change in the airborne fraction, because the observed CO2 change and that “predicted-from-O2” track each other so well.

This is just a cursory look, and there are plenty of complications. Nonetheless, it’s quite clear that the rate of CO2 increase is getting faster, as is the rate of O2 loss. As for those who think the CO2 rise in the atmosphere is from something other than human activity … stupid is as they do.