I guess Bob Tisdale didn’t like my pointing out that when revision goes his way he heaps praise on it, when it goes the opposite way he denegrates it. In an attempt to save face he has posted about what he calls “fundamental differences” between the updates. He only ends up proving my point — but WUWT readers don’t get to see that, because of the data he doesn’t show.


Here’s his “money graph” about the sea surface temperature data update from NOAA: 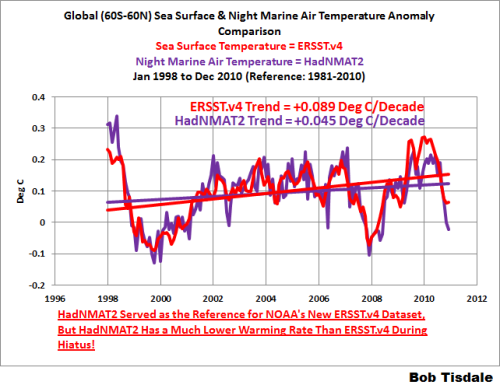 Here’s what he has to say about it:

But the short-term warming rate of the new NOAA ERSST.v4 data during the global warming slowdown is much higher than the HADNMAT2 data. See Figure 1, which was first presented in my open letter to Tom Karl. That graph serves as the basis for my statements (1) that the recent update to the NOAA sea surface temperature data cannot be justified by the dataset that was used a reference for those adjustments, and, in turn, (2) that the NOAA adjustments are overcooked.

Yes, his sole reason is that the ERSSTv4 data has a different trend estimate than the NMAT data since 1998. He calls one “much lower” and the other “much higher.”

It’s not exactly the same as Tisdale’s, it seems we’re using different baselines — but that really doesn’t matter.

What matters is what Tisdale doesn’t show. Here’s another graph with data since 1970:

That certainly destroys the impression from Bob’s cherry-picked graph. But wait — is the NMAT trend estimate “much lower” and the ERSSTv4 trend estimate “much higher”? Well, that from NMAT is 0.0116 deg.C/yr, from ERSSTv4 it’s 0.0117 deg.C/yr. [sarcasm] Big difference! [\sarcasm]

What did Bob Tisdale show you of this part of the data?

I guess Bob Tisdale wants us to compute whatever revision prevents the since-1998 trend from getting any higher, no matter how it affects the rest of the data.

If you don’t think Tisdale explicitly accuses NOAA of wrongdoing, consider what he said in his “open letter” to Tom Karl:

The results of the statistical methods used on the earlier version of the NOAA sea surface temperature data (ERSST.v3b) did not provide the results NOAA was looking for now, so NOAA/NCEI, under your direction, mixed and matched methods until they found the results you wanted (ERSST.v4).

27 responses to “Fundamental Differences between Bob Tisdale and Reality”