What We’re Up Against

There’s a post at WUWT which is really a cross-post of this by Harold Ambler. It claims that the NOAA temperature map for this February is “less than accurate.”


The hubbub is about this map of February temperature ranks from NCDC (click it for a larger, clearer view):

You can view it at the NCDC site here. Here’s another version which shows essentially the same thing, but based on temperature anomaly rather than temperature ranks (click it for a larger, clearer view):

Both maps show New England as not too far off the “normal” range for this February.

In an update, Ambler offers these screen shots to support those numbers: 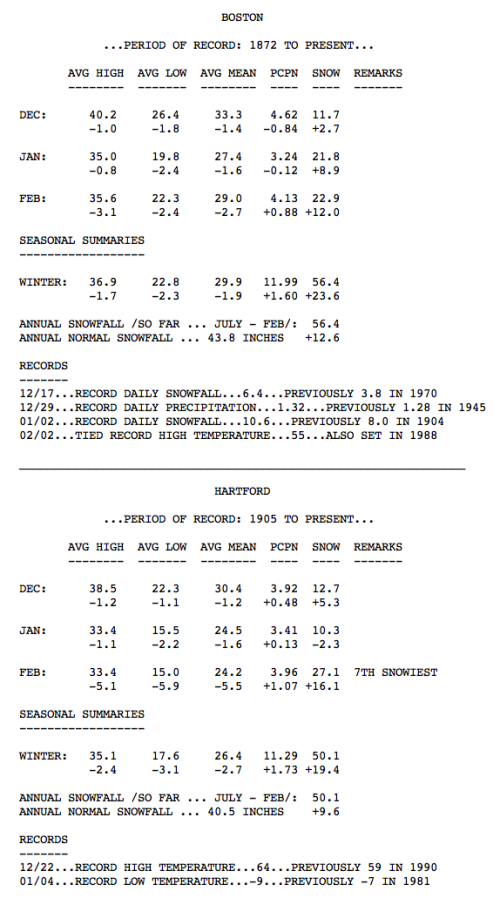 On the face of it, it looks pretty damning. The commenters, at both WUWT and on Ambler’s original blog post, offer little but damnation.

But the problem isn’t with NOAA/NCDC. It’s with Harold “has been writing about weather and climate for more than 20 years” Ambler.

Let’s consider Boston. According to the data available from NCDC, the “Massachusetts Coastal” climate division (which includes Boston) was 0.4 deg.F above normal, but according to the screenshot from Harold Ambler Boston was 2.7 deg.F below normal. [Note: Ambler says 3.1, but that’s for the daily high temperature wherease the maps are for the daily mean temperature, which is pretty sloppy of Ambler.] Of course Boston isn’t the entire Massachusetts coastal climate division, so we don’t expect them to be exactly the same. But +0.4 compared to -2.7 sure seems like WAY too big a discrepancy, it just doesn’t seem possible, does it? Unless, of course, you know what you’re talking about.

That means that the February 2014 “departure from normal” (using the 1981-2010 period to define “normal”) is -2.3 deg.F. That’s not quite the same as the -2.7 listed in the table, but it’s certainly believable — after all, Boston is not the entire Massachusetts coastal division.

For those who are curious, here are the February temperatures from NCDC for the Massachusetts coastal division, together with a trend line: 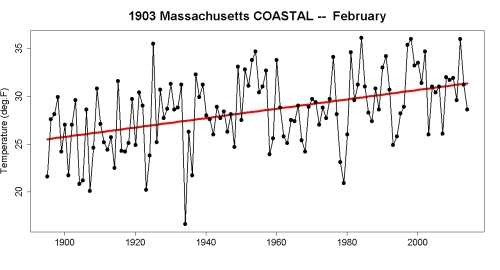 Here’s what really happened: this February, the coastal region of Massachusetts had pretty “normal” temperatures by 20th-century standards. But because recent Februarys have been so hot, it seemed bitterly cold compared to what people have gotten used to over the last three decades or so. Let me emphasize that: what was normal for the 20th century, now seems bitterly cold. It’s this, transported from St. Louis to Boston.

Here’s what else happened: Harold “started his journalism career at The New Yorker” Ambler saw the NOAA temperature map, noticed “average” where he thought it had to be “bitterly cold,” and announced that the NOAA map was “less than accurate.” Either he didn’t know that the numbers he was using were on a different baseline than the map he was viewing, or he didn’t care. And if he didn’t know, he didn’t bother to find out.

Here’s what else happened: Harold “his work has appeared in The Wall Street Journal, The Huffington Post, The AtlanticWire, and wattsupwiththat.com” Ambler made a blog post which readers of at least two blogs look on as proof of the falsity of man-made global warming, and of fraud by NOAA scientists.

Of course I can’t be sure, but I’ve got a feeling that’s exactly what Harold Ambler wanted to happen.

Too bad he didn’t want to do the work required to understand what he was talking about. How many of the readers of those blogs will take the time to find out the truth? My guess: not many. If any. That’s what we’re up against.

49 responses to “What We’re Up Against”