Here’s Antarctic sea ice extent anomaly, monthly data from NSIDC (the National Snow and Ice Data Center), with the baseline period for “anomaly” calculation selected as the entire time span, together with a lowess smooth (in red): 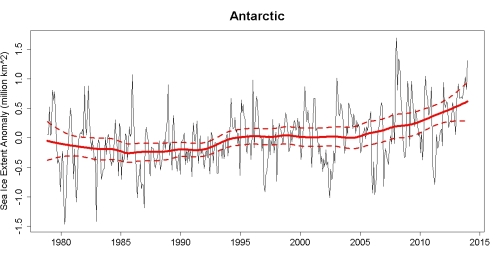 Of course we know that “looks” isn’t sufficient reason to draw reliable conclusions about genuine changes, especially in noisy data. Linear regression confirms that indeed the change is “statistically significant” (although not necessarily actually “linear”) even when we apply a strict correction for autocorrelation. Yes, Antarctic sea ice has increased, and no, the increase isn’t an artifact of the noise.

We can see the same pattern in annual average Antarctic sea ice extent anomaly, on which I’ve superimposed the smooth based on monthly data: 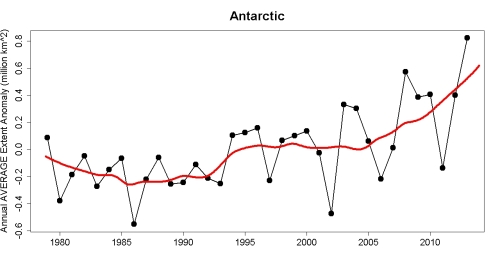 The annual averages alone aren’t as suggestive of patterns as the monthly data. But they do emphasize that last year (2013) was a record-breaker, by a substantial margin.

The apparent “step change” in the early 1990s may have an explanation in terms of a change in the way data were processed. A paper currently in review at The Cryosphere Discussion (Eisenman et al. 2014, A spurious jump in the satellite record: is Antarctic sea ice really expanding?) states “Here, we show that the increase in the reported trend occurred primarily due to the effect of a previously undocumented change in the way the satellite sea ice observations are processed for the widely-used Bootstrap algorithm dataset, rather than a physical increase in the rate of ice advance.”

The most unfortunate aspect is that the change was undocumented. But Eisenman et al. were able to locate data sets representing “before” and “after” the undocumented change, and show a highly suggestive graph of their difference:

The clear impact was to introduce a “step change” at precisely the moment when a sensor change occurred, December 1991. Their paper is specifically relevant to data produced with what’s called the “bootstrap” algorithm (which doesn’t actually relate to the statistical procedure known as “bootstrapping”).

I don’t know whether or not the data I’ve downloaded from NSIDC utilizes the bootstrap algorithm, or whether or not data sets using other algorithms exhibit a similar step change between different versions. But I do know that the moment of the sensor change coincides well with the timing of the apparent “step change” in the NSIDC data.

Therefore I took the NSIDC data from its start up to November 1991 and computed its average, then I took the NSIDC data from December 1991 through the end of 2004 (since the recent increase seems to start right aroung 2005), and computed the difference between their averages. The Dec.91-to-Dec.04 data is, on average, 0.19 million km^2 larger than the Nov.78-to-Nov.91 average. Could that difference be due to some processing issue at the time of a sensor transition?

Next I took the anomaly data and added 0.19 million km^2 to everything before December 1991. That makes the data look like this: 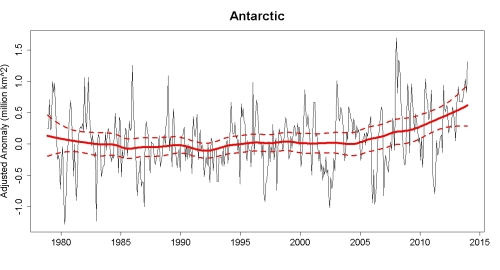 This makes it seem entirely plausible that the apparent step change in the NSIDC monthly data is also due to some processing issue at the time of the sensor transition. I consider this especially true because I don’t know of a plausible physical mechanism which would produce a step change — but I don’t really know much about the physics behind Antarctic sea ice change, so take that opinion with a large dose of salt.

On the basis of the clear step change, Eisenman et al. also suspect that a correction is called for at the time of the sensor change. They go further, asking in the title of their paper the suggestive question “is Antarctic sea ice really expanding?” and stating in the abstract “The results of this analysis raise the possibility that this expansion may be a spurious artifact of an error in the satellite observations, and that the actual Antarctic sea ice cover may not be expanding at all.”

I don’t agree. Even using the “adjusted” data I’ve created after adding 0.19 million km^2 to everything before Dec. 1991, the trend from linear regression is still statistically significant. Even when applying a strict correction for autocorrelation. I think they’ve made a compelling case for a step change having occurred, and a good case that earlier data should be higher (or later data lower), but that the idea “actual Antarctic sea ice cover may not be expanding at all” is contradicted by the data. The increase in Antarctic sea ice cover is “robust.”

So (since this is a “discussion” journal) I submitted a comment to the discussion saying just that. Even before I did, Kevin Cowtan made a similar suggestion, asking the authors to test the trend’s sensitivity to a possible correction. Not long after, Paul Holland pointed out that the other (non-bootstrap) data sets also showed increase, and suggested (and I agree) that the growth of Antarctic sea ice is robust.

There are certainly complications (and potential dangers) with open-discussion journals like The Cryosphere Discussion, but I think in this case the system worked like it’s supposed to. We’ll see how Eisenman et al. respond to these comments.

The more interesting issue, in my opinion, is what has happend since 2005. The linear trend rate over that time span is 77 thousand km^2/yr: 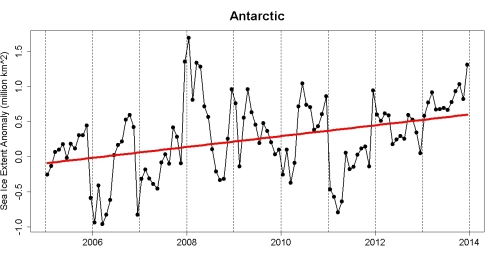 However, the noise is substantial compared to the trend, so there’s considerable uncertainty about the size of the trend; I estimate the 95% confidence interval to be 77 +/- 66 thousand km^2/yr.

That’s quite substantial. But I wouldn’t call it “staggering,” for two reasons. First, it really has only been expanding rapidly since about 2005, which is just not very long (in climatological terms), and as a result the rate of increase is highly uncertain (although, uncertainty cuts both ways and it could be nearly twice the estimated rate). The next few years will dramatically increase our understanding of how Antarctic sea ice is really trending.

The second reason is that, all other things being equal, we expect changes in Antarctic sea ice to be larger than those in the Arctic for purely geographical reasons. As Eisenman has already pointed out, the Arctic is an ocean surrounded by land while the Antarctic is land surrounded by ocean. Even a small change in the location of the Antarctic “ice edge” therefore translates into a much larger change in area or extent than would an equivalent change in location of the ice edge for the Arctic.

I then transformed those “equivalent latitudes” into anomaly values in order to remove the seasonal cycle. This enables us to compare directly the equivalent latitude changes between the two hemispheres. In both cases, increased latitude means migration toward the poles and therefore less ice (like in the northern hemisphere) while decreased latitude means migration away from the poles and therefore more ice (like in the southern hemisphere). Here’s the comparison:

In terms of smoothed equivalent latitude, the Arctic ice pack has receded poleward by 2.6 degrees of latitude while the Antarctic ice pack has advanced by only 0.4. That’s 48 km advance in the south compared to 290 km retreat in the north, larger by a factor of 6.

Latitudinal range isn’t the whole story, and the sheer size of the increase in Antarctic sea ice is important to bear in mind. But the latitudinal range is also an important indicator of how severe are the climatological changes taking place. So here, to put things into one perspective, is a comparison of just the smoothed values:

I think that shows, rather effectively, a very important difference between the changes we’ve seen in the Antarctic ice pack, and those seen in the Arctic.