Candy from a Baby

A new paper by Lewis and Karoly (2013, GRL, doi: 10.1002/grl.50673) concludes that man-made global warming has increased the odds of hot summer weather such as Australia suffered recently. The paper states, “The human contribution to the increased odds of Australian summer extremes like 2013 was substantial, while natural climate variations alone, including El Niño Southern Oscillation, are unlikely to explain the record temperature.”

This last summer saw Australia’s worst heat wave ever, but that was only the worst of the sizzling temperatures that have plagued the continent since November of last year. You can find some of the details here. The heat was astounding. There’s no denying it.


Unless you’re writing for Anthony Watts’ blog, where denial is the order of the day. Willis Eschenbach actually claims, referring to Australia, that “… there was nothing at all unusual about the 2012 summer.” In a later post Bob Tisdale echoes that sentiment, saying “Australia summertime temperatures in 2013 weren’t remarkable.”

The claim is not just wrong, it’s impudently wrong.

Considering just how astounding the heat has been in Australia, especially this last (southern hemisphere) summer, especially during January 2013, how could anyone possibly persaude blog readers that “… there was nothing at all unusual about the 2012 summer“?

It’s so easy, it’s like taking candy from a baby. A group of none-too-bright babies who will tout shoddy evidence as “proof” while calling the thermometer a liar.

All you have to do is use the wrong data.

Eschenbach decides to use satellite data for the lower troposphere from UAH and RSS. Nick Stokes tries to point out that temperature in the troposphere (about the bottom 10 km of the atmosphere) is not surface temperature, which is what the new paper is about. He is shouted down and insulted.

Tisdale goes for a surface temperature data set which is actually reanalysis data (i.e., a computer model fed with observations) which, as Nick Stokes again points out, is known to be biased. In the paper which introduced it you don’t even need to read past the abstract to find that the authors themselves warn “The study also reveals that there are clear biases between the observed surface air temperature and the existing Reanalysis data sets, and they vary in space and seasons. Therefore the Reanalysis 2 m temperature data sets may not be suitable for model forcing and validation.”

What if we used actual observations for the actual surface temperature in Australia? What if we actually looked at data for Summertime, and, say, for the month of January?

Australia’s Bureau of Meteorology (BOM) shows last summer as the hottest on record:

It was a scorcher, that’s for sure. But how unusual was it, and how unusual would it have been if not for climate warming? We can get an idea by looking at the trend in Australia summer temperature:

The 2012-2013 summer was 0.73 deg.C above the trend line. Since the standard deviation of the residuals from the trend is about 0.47 deg.C, that puts it 1.56 standard deviations above the trend line. That’s only mildly unusual, corresponding to a p-value of 0.058 — but that’s only because the changes brought about by the climate trend made such high temperatures less unusual than they were before. And that’s the whole point!

The trend has shown 0.86 deg.C of warming since 1910. That means that if the same summer heat had happened in 1910, it would have been 1.59 deg.C above the trend line rather than merely 0.73. That puts it 3.41 standard deviations above the 1910 trend value. That isn’t just mildly unusual, it’s astoundingly so, corresponding to a p-value of 0.00033. Last summer’s heat in Australia would have been a once-in-three-thousand-years event, given the 1910 conditions. Now it’s only a once-in-seventeen-years event. The warming of Australia’s climate has made an “angry summer” like they experienced recently, about 181 times more likely.

And that’s the whole point.

If we look at January temperature (the height of summer in Australia) rather than the entire summer (December through February), the picture is even more extreme: 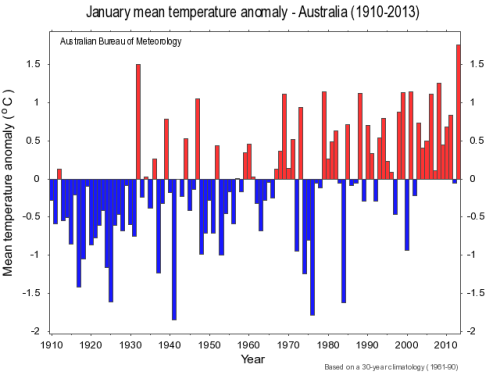 Again, January in Australia was the hottest on record. Again, the trend has been one of warming: 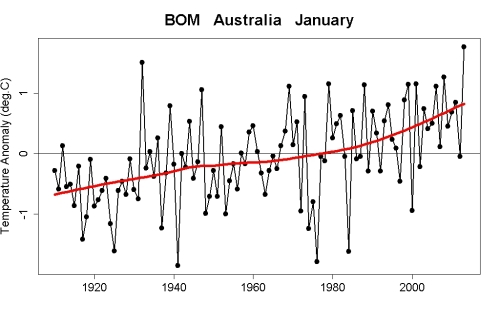 This last January was 0.94 deg.C above the trend, and since the standard deviation of the residuals from trend is about 0.64, that’s only 1.46 standard deviations above the trend. That’s very mildly unusual, with a p-value of 0.0716. But since 1910, the trend of January temperature in Australia has shown an increase of 1.5 deg.C. That means that last January’s temperature was fully 2.44 deg.C above the 1910 trend value, which is 3.8 standard deviations. That is quite amazingly unusual, with a p-value of 0.000071. January temperature that hot would have been a once-in-fourteen-thousand-years event back in 1910. Now it’s only a once-in-fourteen-years circumstance. The warming of Australia’s climate has made an “angry January” like they experienced recently, about 1000 times more likely.

You bet your ass that’s the point.

You can use different data sets, but unless they’re deliberately chosen to give the wrong result (like the folks at WUWT do) you’ll end up in the same place. Using the CRUTEM4 data, for instance, climate warming has increased the odds of an Australian January as hot as this last one by “only” a factor of 63, changing a once-in-640-years event to a once-in-10-years event. Any way you look at it honestly, the chance of an Australian summer, or January, as hot as the last, is a helluva lot greater now than it used to be.

But — if you put blinders on, seize the wrong data and call it “proof,” and you’re willing to call the thermometer a liar, then this last summer in Australia was nothing at all unusual. Expect more of the same.

47 responses to “Candy from a Baby”