… Harry had long since learned that bangs and smoke were more often the marks of ineptitude than expertise.

In my opinion, that quote describes Christopher Monckton to a “T”.


But dwelling on his latest in a long string of unworthy essays would be a waste of time. Instead, I’ll address some aspects of the attempt to account for exogenous factors in global temperature data by “Steve F” which spawned it. It’s not just all bangs and smoke, but there are some unnecessary and un-called-for jibes, and some odd statements about Foster & Rahmstorf (2011) such as “(strangely) limited their analysis to post 1979” when those who read the paper would know the limit was imposed by the data — it includes satellite temperature time series which are only available since that time. But those little bits of sound and fury don’t signify very much.

Let’s reproduce the same procedure, but somewhat differently. For volcanic forcing, I’ll do the same: take AOD (aerosol optical depth) from NASA, multiply by 23, then exponentially smooth it with the same time scale. For solar forcing, I’ll use the same procedure: approximate the forcing as a linear function of sunspot number, then exponentially smooth that too.

Exponentially smoothing the forcing data represents the discrete version of solving the “1-box energy balance” model. If you’re going to do that (and in fact I think it’s a good idea), I think you should use a 2-box model. Using just one box underestimates the rapidity of the response of the atmosphere and overestimates the rapidity of response of the oceans. But that won’t matter for what follows.

For el Nino I’ll use the MEI (multivariate el Nino index) instead of his choice, but I’ll exponentially smooth it on the same time scale he chose. I think el Nino should be lagged rather than exponentially smoothed — but that too won’t matter for what follows.

Let’s regress temperature against those three variables as he did, but instead of the HadCRUT4 time series, I’ll use an artificial temperature signal that looks like this: 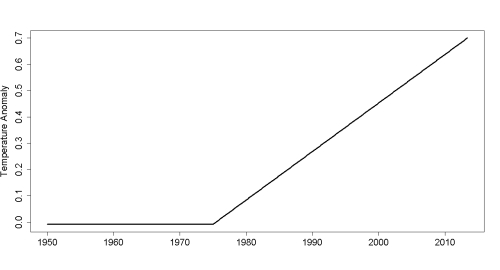 It’s a “schematic” representation of temperature, one which clearly isn’t influenced by volcanos or el Nino or the solar cycle. Then I’ll linearly de-trend the temperature data. After all, as “Steve F” says,

Using the original temperature data (not detrended) distorts the regression fit by essentially forcing the regression to explain all the temperature change, including any slow secular trend, using the three short-influence variables, and so yields very poor (even physically nonsensical) results.

It’s a pity he didn’t pay more attention to his own statement. He de-trends the data linearly, which, when applied to our artificial “schematic” temperature data, leaves this: 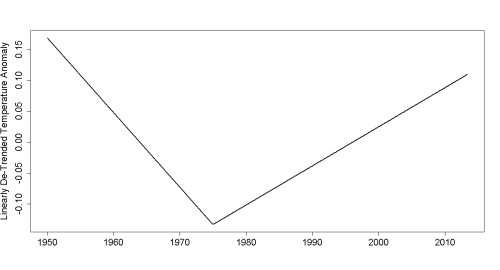 When we regress this on the three variables, we get an interesting fit: 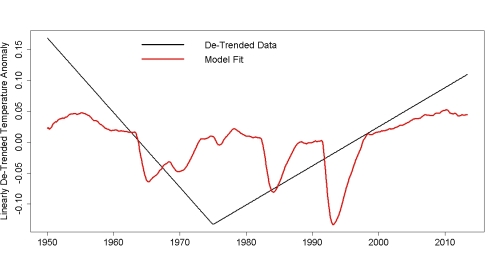 It’s not only quite interesting, it’s also quite statistically significant. But, just as though it were full of sound and fury, it signifies nothing but the fact that the unremoved trend pollutes his model. Rather a lot. The essential result, when applied to actual temperature data, is to overestimate the volcanic influence and underestimate the solar influence (for the schematic data, the solar influence is — nonphysically — negative).

Steve F realized that a trend could pollute the fit to exogenous variables. But he utterly failed to account for the fact that removing a linear trend doesn’t de-trend the data and doesn’t solve the essential problem. Although he seems to know how to run the programs, I have my doubts about his “eptitude.”

I’ll probably have a good bit more to say on this in the near future.

36 responses to “Bangs and Smoke”