Although it’s useful and sometimes interesting to refute silly ideas about Arctic sea ice loss (such as the claim that it is “stabilizing” or even in “recovery”), it’s far more interesting scientifically to consider what available data actually tell us about the changes of the ice pack in the frozen north.


Three parameters are often used to characterize sea ice. Area is simply the area of ice-covered ocean. Extent is the amount of ocean which has a minimum ice coverage percent (usually 15%). It may be the case that this is easier to determine than area itself. Volume is the total volume of sea ice, which I regard as a more relevant physical parameter but has not been estimated with anywhere near the accuracy of either area or extent. This is primarily because computing volume requires estimating sea ice thickness, which as far as I know has only been directly measured intermittently.

The best volume data of which I’m aware are from PIOMAS, but that is based on computer simulations of ice thickness using weather data (calibrated with available data), and although the results have been shown to be telling the story right, they cannot be thought as accurate as either area or exent data. Future observations may improve things dramatically, but at present we can’t study ice volume with as much confidence as other measures.

We can also study some derived variables. Two in particular come to mind. First is average thickness, which we’ll define at volume divided by area. In addition, sea ice extent is larger than area because the ice pack breaks up (expecially around its edge) and spreads out over a larger area. We’ll define spread as the ratio of extent to area.

Let’s study all these quantities to estimate their changes during the satellite era. For extent, we’ll use data from NSIDC (national snow and ice data center), for area data from UIUC (University of Illinois and Urbana-Champaign, which runs the excellent website Crysophere Today), for volume data from PIOMAS. For all quantities I’ll use monthly averages, which gives plenty of time resolution and enables us to study the annual cycle itself, as well as trends for different parts of the year.

Note the large 1-year cyclic variations since about 2007. That’s the residual annual cycle, because the annual cycle since 2007 has been larger than its average throughout the time span.

We can, however, improve things by computing what I’ll call an adaptive anomaly. Instead of subtracting the average annual cycle for the entire data set, we’ll subtract the average annual cycle for years near the time in question. This is the same method used to compute anomaly for CO2 data, because the annual cycle of atmospheric CO2 has also increased over time. I’ll define adapative anomaly as the difference between a given moment’s value, and the average for the same time of year during the 5-year time span nearest the given moment of time. I’ll further define that average as the result of a 5th-order Fourier series fit. I’ll use adaptive anomaly throughout, and simply call it “anomaly.”

Using adaptive rather than simple anomaly has almost no effect at all on the trend, but it does improve the visual interpretation of anomaly graphs by isolating the trend changes from the annual-cycle changes. And, frankly, that’s what anomaly values are about.

The anomaly for extent data now looks like this: 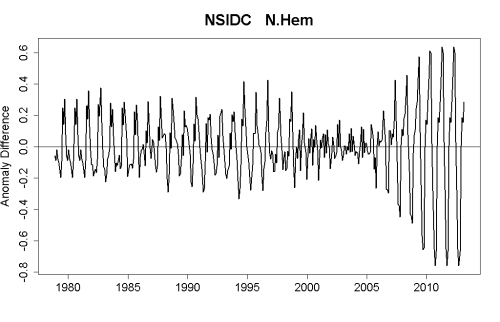 The anomaly graph also shows (in red) a smooth which estimates the trend in the data. There are plenty of fluctuations about that trend, but there’s no statistically justifiable evidence that the trend is different than indicated by the smoothed line.

An easy way to visualize the trend is to compute annual averages:

I’ve smoothed these (red line) on a slightly shorter time scale than used for the monthly data, but bear in mind that the differences between the two smooths (which are small) are not statistically significant.

Note that 2007 was an unusually low year for sea ice extent, dipping well below the trend. But its dip isn’t that remarkable, it’s comparable to that in other years. The extreme low in 2007 is mostly due to the trend, but the dip well below the trend in 2007 has been attributed to “weather” — specifically, to an extreme minimum that year caused by wind patterns which tended to flush ice out of the Arctic, through the Fram Straight, into the north Atlantic where it melted away.

Note also that just as random fluctuation (weather) caused 2007 to dip below the trend, it also caused 2008 and 2009 values to rise above the trend. This was touted by fake “skeptics” as some kind of “recovery” of Arctic sea ice, some of them even called it the onset of return to prior sea ice levels. For data with this level of noise and autocorrelation, declaring trend reversals or even reductions based on such short time spans is foolish. Subsequent years have contradicted their assertions.

The record low in 2012, however, seems not to have been exaggerated by weather fluctuations (despite claims to that effect). It’s right on the trend line. That doesn’t prove that it wasn’t brought about by such fluctuations, but it does show that there’s really no evidence of that, at least not yet. According to the evidence, the trend now is as fast as it ever was.

The trend has been different at different times of year. We can use the monthly data to compute the average trend rate for each month of the year as well as its uncertainty level, which gives this:

In addition to looking for trends (and their changes) in the value of sea ice extent, we can also study trends in the annual cycle itself. Windowed Fourier analysis enables us to estimate how the amplitudes and phases of the various Fourier series components change over time. Here, for instance, is the change in the amplitude of the fundamental Fourier component of the annual cycle of sea ice extent: 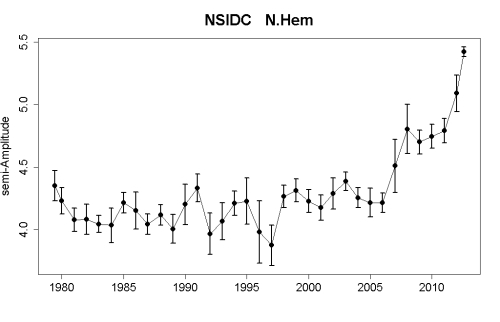 The really big change has been since 2007, with the amplitude increasing and the last couple of years showing the largest cycles yet. 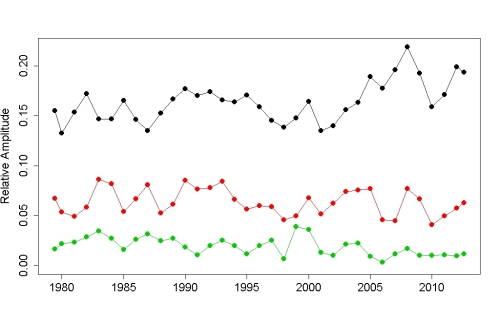 Amplitude of the 2nd Fourier component is shown in black, of the 3rd in red, and the 4th in green. Changes in the relative amplitude suggest change in the shape of the annual waveform. Only the 2nd component has changed noticeably, with its relative amplitude increasing recently, so that its actual amplitude has increased even faster than that of the fundamental component. The result of this particular change is that the annual September minimum has become “pointier” recently while the annual maximum has become more “flat.” 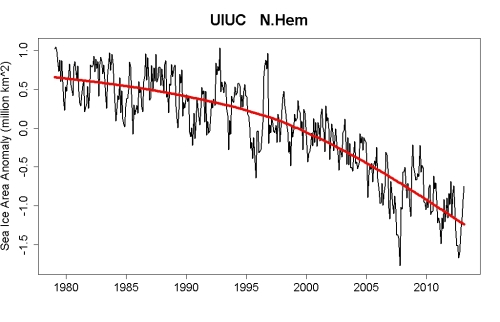 It probably shouldn’t be too much of a surprise that the changes in the rate of ice loss according to sea ice area are just about identical to those indicated by sea ice extent. Again the overall rate has accelerated and shows no evidence yet of any deceleration. Again different months exhibit different rates:

The annual maximum migrated earlier in the year by about 0.02 cycles (about a week) in the late 1980s, and has slowly returned to near its early-1980s value since.

Arctic sea ice volume shows a somewhat different pattern that that of extent and area:

There are still plenty of fluctuations but they’re not as large relative to the trend as with extent or area. This may be partly because the volume data involve the output of a computer model for ice thickness. There is still strong acceleration of sea ice volume loss, and no sign of deceleration.

Different months show different average rates of decline, but the seasonal differences aren’t as pronounced as with extent or area:

One extraordinary and dramatic thing to note is how much the September average (when it reaches its annual minimum) has declined:

Volume data also show a larger change of phase than extent or area, which began in earnest in 2009: 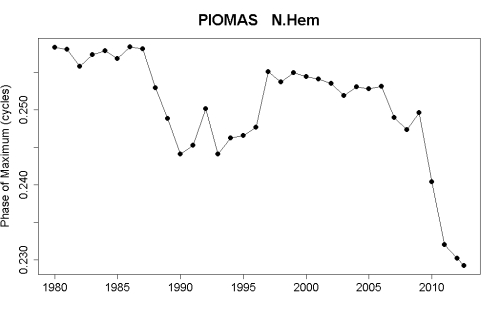 All in all, the three direct measures of Arctic sea ice show that the ice pack is in a “death spiral,” disappearing right before our eyes. The decline has accelerated since satellites began detailed observations. There is no evidence of any recent deceleration, despite the faulty opinions of a few. And there are some interesting changes in the timing and shape of the annual cycle. I don’t pretend to understand the physical reasons for these changes.

In another post soon, we’ll take a closer look at the changes to the annual cycle of sea ice volume, and we’ll also look at the trend and cyclic changes of sea ice “spread” and thickness.