the Wild, Wild West … on Fire

A frightening report from Climate Central details the increase in wildfires in 11 western states of the U.S.


They studied the number of large (more than 1,000 acres) and very large (more than 10,000 or more than 25,000 acres) fires, as well as the acreage burned, in forests managed by the U.S. Forest Service. By restricting to areas managed by the Forest Service, and to fires at least 1,000 acres, high-quality data sets are available since 1970 (when their study begins) — it’s highly unlikely that large fires escaped detection.

Analyses of “large fires” reported here are restricted to fires over 1,000 acres in size. As described by Westerling et al., these large fires represent less than 1 percent of reported wildfires but they represent more than 70 percent of the total area burned. In other words, these are truly the most damaging fires, and are likely to be the ones more heavily influenced by climatic factors. In addition, the land management units from which we drew our data contain more than 60 percent of the forested land in America’s West.

All indicators point to dramatically increasing wildfire activity. Research points unequivocally to global warming as a, if not the, major factor in this increase, primarily due to increased spring/summer temperatures in western states leading to earlier snowmelt, longer fire season, and hotter temperatures during fire season.

The increases are not just visually impressive, they’re statistically significant. Here, for instance, is their plot of the number of large (> 1,000 acres) fires in Arizona each year from 1970 through 2011:

I digitized the graph (which was easy and accurate because all the numbers are integers) and performed the same analysis. This consists of “Poisson regression,” which is the appropriate choice when the data are counts. I got almost exactly the same result (more about that in a moment), undoubtedly statistically significant (greater than 99.9999% confidence):

I didn’t pick Arizona for illustration because it gave a significant result. I picked it because it’s first on the list, alphabetically. A surprising, and unhappy, result is that the increase in wildfire is so ubiquitous throughout the western U.S. They point out increased wildfire occurrence in 10 of the 11 states:

Among the Western States, Arizona, California, Colorado, Idaho and Montana have seen the most dramatic increases in wildfires since 1970 (Figure 7). According to our analysis, the average annual number of large fires has nearly quadrupled in Arizona and Idaho, and at least doubled in California, Colorado, Montana, New Mexico, Nevada, Oregon, Utah, and Wyoming. On the other hand, the frequency of fires in Washington has remained steady.

I beg to differ.

I suspect they may have made a mistake in their Poisson regression. Here’s their result for Washington state: 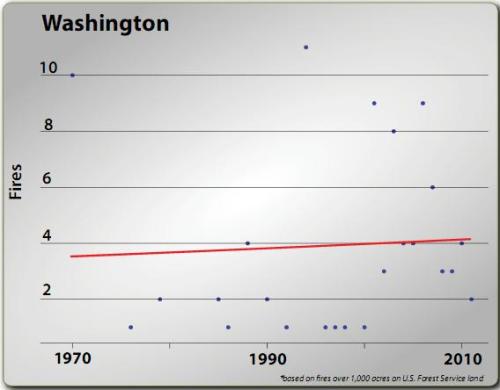 Note that the regression line is pretty flat. It’s also not statistically significant (I digitized this data too).

But that’s only true because there are so many years with no data.

Here’s my theory: the years with no data plotted are those with no fires over 1,000 acres. In that case the correct count is zero. I strongly suspect that in fact, counts of zero are correct for those years and should be included in the analysis.

When I include the zero values I get this:

Therefore it seems to me that rather than claim 10 out of 11 western states show increase in large wildfires, we should say that all 11 do.

Wildfire is an increasing threat in the western U.S. And it’s going to get worse. Each 1 degree Celsius (1.8 deg.F) temperature increase is projected to increase wildfire by disturbing amounts throughout the west:

Be afraid. Be very afraid.