Arctic sea ice has been declining so fast that most people in the know expect to see ice-free conditions in the Arctic ocean at its annual minimum before very long. The natural question is, how long?


The description “ice-free” doesn’t necessarily refer to the absence of any ice anywhere. There will likely be small pockets of ice near coastal boundaries, in particular the northernmost parts of Greenland and the Canadian Arctic Archipelago, which will persist even when the Arctic is essentially ice-free. Many researchers have suggested that when the extent of Arctic sea ice at end-of-summer dips as low as one million square kilometers, we’ll effectively have reached “ice-free” conditions.

So … when might that happen? I don’t know the physics of sea ice sufficiently well to make a useful prediction, but so far physical models haven’t done a very good job anticipating Arctic sea ice loss anyway — it has vanished faster than predicted. But we can look at the results of purely statistical predictions, extrapolating existing trends into the future, so long as we keep in mind that extrapolating trends very far into the future cannot be considered reliable. They may well give us some insight into how fast things might happen, but betting on the outcome based on long-term statistical extrapolation is, one might say, a “fool’s errand.” Let’s look at such extrapolations anyway, not to make rigid claims about what will happen, but just to explore the possibilities.

There are three common measures of Arctic sea ice: extent, the area of ocean with at least 15% ice cover; area, the area of ocean covered by ice; and volume, the volume of northern sea ice. I’ll focus on two of those measure, area (from Cryosphere Today) and volume (from PIOMAS). As base data, I took daily estimates of area and volume and determined the annual minimum values for each year.

I’ve added a lowess smooth, and as many of you already know my program enables me to record the velocity, i.e. the time rate of change at each moment. If we use the velocity at the most recent year to extend the curve into the future, then it will hit zero in about 15 years. It will reach 1 million km^2 (the “essentially ice-free” level) in about 9 years.

Here’s the limiting latitude over time:

Volume has been declining more precipitously than area (or extent), so extrapolating the present trend into the future predicts total sea ice loss sooner than using either area or latitude. The extrapolation hits zero in just 5 years: 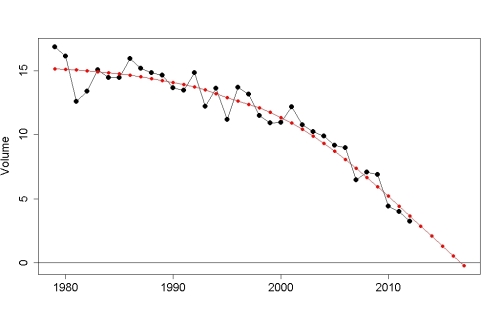 Volume is equal to area times mean thickness. Hence if volume has decreased faster than area, then thickness must also have declined. Here’s the thickness itself, defined as annual minimum volume divided by annual minimum area (an imperfect but still good definition):

We can see that since 1979 (the satellite era for sea ice data), both area and thickness have reduced to half their starting values, so volume is now only one fourth what it was in 1979. One fourth! That is, quite simply, amazing. Astounding. Anybody who claims that this is just a “natural variation” is full of something other than ice.

Extrapolating the thickness into the future hits the zero point in about 7 years. But I don’t trust this extrapolation at all — not even a little bit. For one thing, for thickness the extrapolation is overly sensitive to the “smoothing time scale” of the smoothed fit. For another thing, thickness declined more slowly until 2009, but in 2010 it “fell off a cliff.” But it hasn’t continued to decline since then (albeit a very brief interval), it has held steady at about 1.5 meters. And, I’d guess that there are fundamental issues of mechanical, structural integrity which come into play when sea ice gets that thin. My guess: thickness may hold steady at this value for many years to come, or it may continue to decline, or we might even see another sudden and dramatic decrease — which is the same as saying that I have no confidence in any prediction of future thickness.

We can see the interplay between changes in area and thickness on a scatterplot of the two:

I’ve labelled a few of the years, including the huge decreases in area during 2007 and 2012, and the big drop in thickness in 2010. It’s interesting that those two changes (large area and thickness decreases) don’t occur together.

So … what’s the forecast? There isn’t one. But I will give my impression of the collection of “at the present rate” scenarios. I emphasize this because in the past, when scientists have said “at the present rate,” certain unscrupulous individuals (like Anthony Watts) have claimed they’re actual predictions and used them for ridicule. That’s basically, fundamentally dishonest.

At the present rate, the different variables indicate an essentially ice-free Arctic in about 8 or 9 years. That’s not the distant future. It’s close to the end of this decade.

It will have consequences — it already has. Loss of sea ice leads to more absorption of solar energy (the “ice albedo” effect). It alters large-scale patterns of circulation in the atmosphere. It affects water vapor content in the far north. It influences our weather, especially in winter, and may well be responsible for changes in wintertime snowfall in the northern hemisphere. Further ice loss — and that’s a prediction — will have further consequences. We won’t like them.

Here’s another prediction: even as sea ice continues to decline, fake “skeptics” will call every little random gain a “recovery,” and every further loss “natural variation.” That’s because they’re in denial.