As I mentioned in an earlier post, I recently modified my smoothing program so that it would record not only the estimated smoothed value, but the estimated smooothed velocity (rate of change) as well. I’m always a little leery of a new analysis method, there could be some unanticipated quirk of its behavior, but let’s apply it anyway to estimate the momentary rate of change (the velocity) of CO2 on about a 5-year time scale. 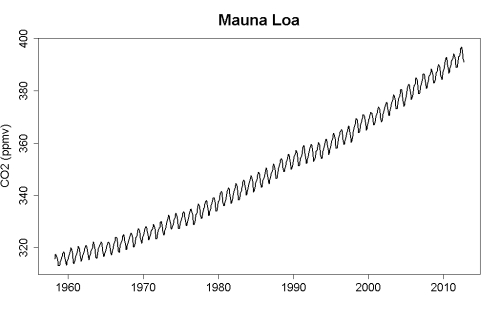 I removed the seasonal cycle, then smoothed it to get this:

This smooth is pretty “fast” in order to pick some of the fine detail in CO2 changes. I also smoothed it with a slightly “slower” smooth, to get the velocity estimate on a 5-year time scale. That gives this for the smoothed rate of change of CO2:

To check how good the estimate is, I also computed the rate of change with another method of known reliability. I took the data, and for each 5-year time span I fit a combination of a linear trend (to estimate the growth rate) and a 4th-order Fourier series (to account for the seasonal cycle). Here are the growth rate estimates (in red) from that analysis, compared to those from the smoothing program:

The match is outstanding. Clearly the smoothing method gives good velocity estimates, at least in this case.

That’s not such a surprise. A lowess smooth estimates the smoothed value at a given time by taking the data near (in time) to the given moment and fitting a low-order polynomial (usually 1st or 2nd degree). The value of the fit at the given moment is the smoothed estimate. If the local polynomial fit is a good representation of the data, then its time derivative should be a good representation of the smoothed rate of change of the data. This particular data set bears that out.

It also shows, quite convincingly, that the velocity of CO2 has increased in recent decades. In fact it has increased consistently, but with large fluctuations superimposed on that increase. Those fluctuations are part of the complex carbon cycle. Some of the fluctuations are due to changes in the growth of land plants, which are related to other phenomena like ocean cycles such as the el Nino southern oscillation (ENSO) which affect not only temperature, but patterns of rainfall — and hence impact the biosphere and how much CO2 it sequesters.

There is one major fluctuation whose cause I don’t know: the large decrease in CO2 growth rate around 1992. The ENSO doesn’t explain it. I have heard it suggested that it’s related to the collapse of the former Soviet Union, and the decline in economic activity associated with that event. But CO2 emissions estimates (from CDIAC) don’t support that idea:

In any case, the fluctuations make it impossible to know how the trend is changing on short time scales. Hence when we do start to reduce our CO2 emissions, unless the reduction is dramatic (to the point of remarkable!) it will be years before we can see its influence in CO2 concentration with confidence.

That’s why there isn’t yet any reliable sign of a slowdown in the rate of increase of CO2 growth. Some might want to claim that the CO2 growth rate hasn’t increased in about 10 years or so — but considering the large and ubiquitous fluctuations, that’s just as nonsensical as the mistaken claim that the temperature trend has slowed. The evidence indicates that CO2 continues to grow at an ever-increasing rate, together with fluctuations, but the rate of increase of its growth has not yet slowed down.

And that’s cause for great concern. Climate is changing and we know the cause. It’s the changes we have wrought in the very air we breathe, the increase of greenhouse gases in our atmosphere. Chief among them is carbon dioxide (CO2), a byproduct of burning carbon-based fuels like oil, gas, and coal, which we pour into the air at the rate of billions of tonnes every year.

To avoid the worst case, we have to slow, then stop, dumping all that CO2 into the air. Yes it will help to reduce other greenhouse gases (like methane and nitrous oxide and chloroflourocarbons), and yes, to reduce CO2 emissions we must switch to a non-carbon-based energy infrastructure. All discussions of how to do so are important. But let’s not forget that the reason we must do so, and so soon, is that carbon dioxide is the root of the problem. It’s the elephant in the room. It’s the billion-ton whale. At the moment, it’s what it’s all about.

Perhaps the greatest danger is that natural responses to climate change will alter the carbon cycle itself in dramatic ways. About half the CO2 we presently emit is sequestered in other reservoirs, including the oceans (which are, unfortunately, acidifying as a result) and the biosphere. But we can’t count on those reservoirs to continue soaking up half of our excess CO2. They may even become sources rather than sinks for atmospheric CO2, making things a lot worse. And with the rapid disappearance of the cryosphere, things like melting permafrost may unleash a CO2 monster.

If that happens, then the one thing we know we could safely do to mitigate climate change — to stop dumping CO2 into the air so its growth slows or even stops — may no longer be an option. We could see incredibly rapid CO2 increase even if we bring our own emissions to zero. The CO2 train is already moving much too fast, and if it takes on a life of its own, unspeakable disaster will be the inevitable result.

So when it comes to doing the one thing we know we can safely do — I suggest we start immediately.

I’ll close by saying that my request for donations was answered beyond my expectations, and (as my wife reminds me) I would be an ingrate not to express my sincere, in fact heartfelt, thanks to you all. I would also like to thank all loyal readers, including those unable to donate — I know how hard it can be in tough economic times. To everyone: your gifts, your attention, and your help in spreading the word (which is a mighty force!) are noticed — and not just here. Your collective efforts are far more potent than my poor power to add or detract. Fáinne óir ort!