In the last post we discussed the “Northeast hotspot.” It’s a region of the Atlantic coast of North America where sea level rise has accelerated in recent decades, identified by Sallenger et al.


They analyzed tide gauge data over time “windows” of various sizes, comparing the rate of sea level rise (SLR) in the first half of the window to that in the second half. They chiefly used windows of 60 years, 50 years, and 40 years, ending with 2009. They refer to the difference as “sea level rate difference,” or SLRD, and positive values mean sea level rise was faster over the most recent two to three decades than over the previous two to three decades. Hence their analysis mainly (but not exclusively!) focused on the last 60 years, i.e., the data since 1950. What’s interesting is that during this time span, the region from about Cape Hatteras to Boston shows more increase in the rate of sea level rise than other parts of the North American coast.

They identified 20 tide gauge stations within the area of the Northeast hotspot (or “NEH”). One which shows the recent acceleration most clearly is Boston. Let’s take the data from PSMSL (monthly mean sea level from the Permanent Service for Mean Sea Level) for that location, remove the annual cycle to compute anomaly data, then smooth the result to reduce the noise and enable us to see what the trend is actually doing. Let’s also fit a straight line to the data (by least-squares regression) so we can compare the smoothed trend to what would have happened if the rate of sea level rise had been constant since 1950:

We see that relative to the average rate of increase over the time since 1950, sea level at Boston rose more slowly until about 1987, more quickly since then. Station data records which show this behavior will exhibit a faster linear trend over the 2nd half of the time window than over the 1st half, and Sallenger et al.’s analysis is designed to detect exactly that. By smoothing the data, and comparing the smooth to the straight-line fit, we get the added benefit of finding out approximately when the rate of sea level rise changed (Sallenger et al. also determined that, but by a different method).

Sallenger et al. demonstrate the behavior of their method by applying it to artificial data. They did so for two kinds of acceleration. In one case, sea level rises at one constant rate for a while then switches to another constant rate. In another case, the acceleration is steady (so that sea level roughly follows a parabola). They took a window of the artificial data and compared 1st-half trends to 2nd-half trends, then let the window slide through time to see how the comparison changed over time:

In both cases their method detects the acceleration, since in both cases it shows positive values of SLRD (sea level rate difference). But for a sudden change in rate, the SLRD is only positive when the window includes the change point, and peaks when the window is centered on the change. For a steady rate of acceleration, the SLRD is positive, but constant throughout. In either case, when sea level really does accelerate their method will detect, and even quantify, the change.

There is one danger with their method, a circumstance which can lead to false detection of sea level acceleration. Suppose sea level changes at a constant rate for a while, then makes a brief dip, then recovers to its previous level and resumes its steady change at the same rate as before.

In that case sea level hasn’t really accelerated, but the linear trend over the 2nd half of the window will be more than that over the 1st half, giving a positive value of SLRD. I’ve examined all the station records in the hotspot used by Sallenger et al., and although many of them do show a dip, they all also show a genuine acceleration — so the results of Sallenger et al. are correct.

I took the data since 1950 for all 20 stations in the hotspot, computed anomalies, smoothed them, then subtracted the linear trend line from them to show the departure from a linear trend. Here are all of them, plotted on the same graph: 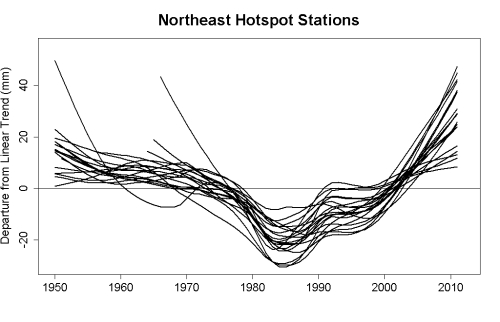 Most of them do indeed show a dip in the mid-1980s. But they also show genuine accleration, rising faster since about 1990 than they did before that. It’s abundantly clear that yes, sea level rise really did accelerate recently at these stations, so there really is a “hotspot” of sea level rise on the Atlantic coast.

We can also combine the 20 station records into a composite. To that end, I aligned the data using the “Berkeley method,” smoothed the result, and computed a straight-line trend as well. That gives this:

We can also, as before, subtract the linear trend from the smoothed change:

The combined record shows the same essential behavior as the individual records (surprise!), namely, a dip in the mid-1980s and faster rise since about 1990 than before.

We can even take the aligned data and fit a quadratic polynomial, which also illustrates the presence of acceleration. It’s more clearly visible when plotted against annual averages rather than monthly: 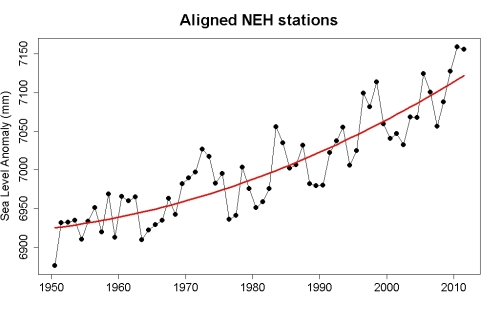 This analysis illustrates the behavior of sea level changes in the hotspot, and confirms the results of Sallenger et al. The one thing I haven’t done in this post is any statistical significance testing of the results. But I really don’t need to — Sallenger et al. already did that.