I’ve said it before and I’ll say it again: one of the strongest evidences of global warming is the dramatic loss of sea ice in the Arctic. Northern hemisphere sea ice has taken a nose-dive recently, which has caused some speculation in the blogosphere that we might be headed toward a record-shattering melt season.


I’ve already made my prediction that this year’s September average sea ice extent from NSIDC will be 4.45 million km^2, which would be less than last year but not break the record minimum set in 2007. But there’s a large uncertainty in that figure, it could be higher or lower by nearly a million km^2. We can imagine three broad categories of possible outcomes: the extent could be more than it was last year, or it couldbe less but still not break the record set in 2007, or it could break the record. I’ll go so far as to say that there’s a 36% chance this year’s September average extent will be higher than last year’s, a 27% chance it’ll be less than last year’s but not break the record, and a 37% chance we’ll see a new record low. The recent nose-dive, although interesting, doesn’t motivate me to change my prediction.

This last winter, the extent of Arctic sea ice was greater than in other very recent years. That’s not such a surprise, after all it gets cold up there especially in winter. Nonetheless, some of the fake skeptics crowed about it. But although it covered enough extent for some to say it had reached “normal,” the ice itself wasn’t normal. It was thinner than before, so its total volume was still much reduced. Much.

There are three commonly used measures of Arctic sea ice. One is extent, which is the area covered by at least 15% ice. Another is area, simply the area of sea ice, so that a region with only 15% coverage only contributes 15% of its area to the total. The third is volume, which is the total volume of sea ice. Of the three, only volume takes into account how thick the ice is, and only volume reflects the extreme thinning which Arctic ice has experienced.

We have many sources for sea ice data online, and for each of the metrics there’s a source of daily data. Daily extent is reported by JAXA, although unfortunately their data don’t begin until mid-2002. Daily area is reported by UIUC through their website Cryosphere Today. Daily volume data are available from PIOMAS. What does each one show?

Let’s look at extent data first. The usual way to graph it is to overlay each year’s data on top of the others to show how the annual pattern has changed: 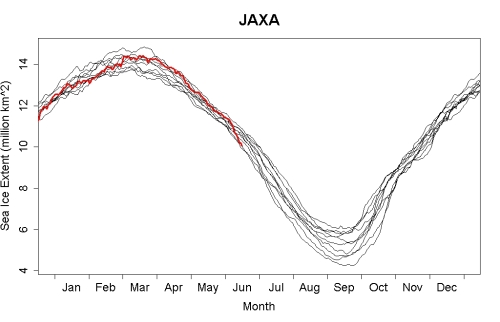 I’ve highlighted the 2012 data in red (and made the line thicker). Although during March and April 2012 ice extent was higher than average (but “average” reflecting only data since mid-2002!), it has recently taken a nose-dive and is now near the minimum for this date.

A representation I prefer is to show a time series plot of anomaly, which is the difference between a given value, and the average for the same time of year. This removes the annual cycle (or at least, its average) from the data. It also focuses attention on the trend, which is the truly important thing to note:

Sea ice extent has obviously trended down, even if we use only one decade of data (which is all JAXA offers). Yes, that downward trend is statistically significant. The nose-dive in recent days is obvious, at the end of the data.

Global warming should have its greatest impact on Arctic sea ice toward the end of summer, when the melt season culminates. This motivates us to study the annual minimum extent of the ice: 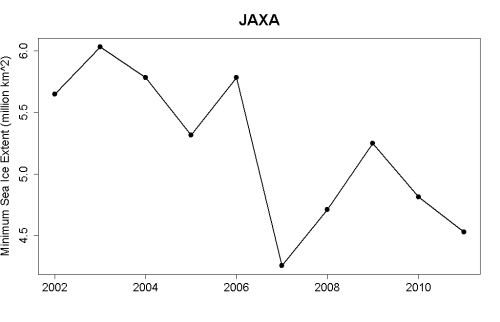 Again there’s a clear decline, and again it’s statistically significant even with only 10 data points. The summer minimum extent of Arctic sea ice is decreasing at nearly 150,000 km^2/year. Strong evidence.

Although extent data from JAXA don’t begin until mid-2002, area data from UIUC start in 1979: 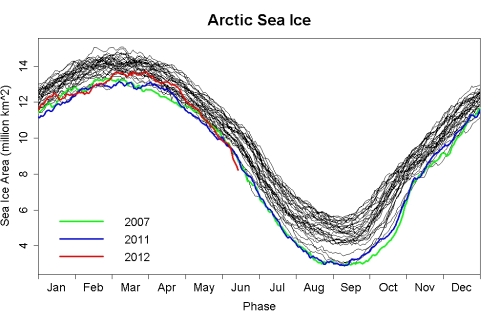 I’ve highlighted 2007 (the record-breaking year) in green, last year in blue, and this year in red. Last year (2011) actually broke the 2007 record (by a hair’s breadth) for minimum area in the UIUC data, but not for minimum extent in the JAXA data. The recent nose-dive is there too, showing that area isn’t just nearly the lowest on record for this date, it is the lowest.

Again, I prefer an anomaly plot: 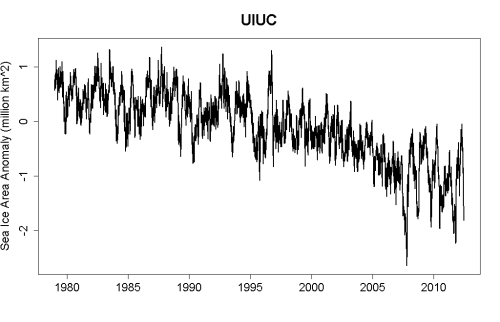 With over three decades of data instead of just one, the downward trend isn’t just obvious, it’s not just statistically significant, it’s in your face.

As undeniable as the decrease in extent is, as dramatic as the decline in area is, the decline in Arctic sea ice volume is nothing short of astounding. The year-on-year plot doesn’t really show how steady the loss has been because it doesn’t show which year is which:

The anomaly plot does show how steady the loss has been:

Do I need to say it?

The summer minimum sea ice volume hasn’t just declined, it has decrease by 75% during the time span covered by the data:

It wasn’t that long ago that Anthony Watts made quite a fuss over claims that we had lost 75% of Arctic sea ice, calling the idea “ridiculous” and “patently false.” He was pretty thoroughly raked over the coals, because the statement was about summer minimum sea ice volume — which has declined by 76%. In my opinion, for Anthony Watts it’s the truth itself that is “ridiculous” and “patently false.”

A few more predictions: If this year’s minimum is higher than last year’s, then the fake skeptics will crow loud and long about “recovery” of the sea ice even though the trend remains undeniable. They have to take anything they can get — and when it comes to Arctic sea ice, they’re desperate. Anthony Watts will probably mention Mark Serreze from NSIDC and ridicule his notion of an Arctic sea ice “death spiral,” even though a death spiral is exactly what we’re witnessing.

If this year’s minimum is less than last year’s but doesn’t break the 2007 record, the fake skeptics will also talk about “recovery” and how there’s nothing to worry about.

If this year’s minimum does break the 2007 record, the fake skeptics will adopt one of two strategies. The dumber ones will talk about how it’s all because of something — wind, ocean currents, the Arctic oscillation, solar ultraviolet, leprechauns — anything except global warming. The smarter ones won’t breathe a word about it.

What will this summer bring? Will we break the record for the summer minimum again? In any of the measures? In all three? I don’t know. In addition to trend, sea ice shows fluctuations. The uncertainty in predictions is sizable. But this much you can expect: the trend will continue. Because of global warming.

I’ve said it before and I’ll say it again: those who deny that Arctic sea ice decline is powerful evidence of global warming aren’t skeptics. They’re fake skeptics.