These days, amateur astronomers are far better equipped — at least electronically — than they were just a decade ago. Many of them have acquired CCD cameras at modest expense and have learned well how to use them to estimate the brightness of variable stars, a process called CCD photometry. This makes for more precise measurements than the “old way,” which was to look at the star, possibly assisted by a telescope or binoculars, but with no other instrument to estimate brightness than the human eye. The target star is compared to nearby stars of known brightness (comparison stars) and a “judgement call” is made. This process is called visual photometry.


Perhaps you’re thinking “At last! With this innovative new technology, amateur astronomers can finally produce data which is of value comparable to that obtained by professionals!”

You’d be wrong. Not about amateurs making observations of comparable value to professionals, they can. But you’d be mistaken to think that they couldn’t do so before.

Let’s take a close look at an interesting star which has been observed by amateurs and professionals alike, a Cepheid-type variable known as X Cygni, or just “X Cyg” for short.

I managed to find 385 brightness estimates of this star by professional astronomers, published in the scientific literature, which are available online through the McMaster Cepheid Photometry and Radial Velocity Data Archive. Here’s a graph of the brightness over time: 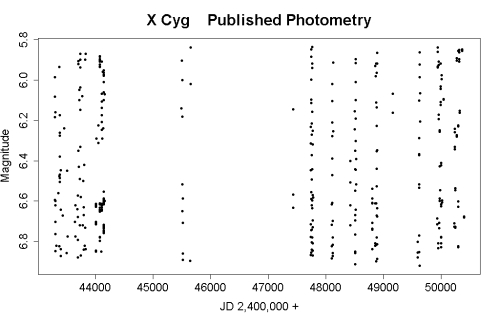 It doesn’t look very informative. That’s because Cepheid-type variable change brightness so quickly that the pattern of fluctuations isn’t easily visible in this graph. This particular star shows a periodic oscillation with period 16.386 days, and since the graph covers over 7,000 days the cycles are squeezed too thin to be visible. Besides, professionals can’t monitor individual stars all the time, so for most of the 7,000 days shown on the graph, they just weren’t looking at it.

When patterns aren’t readily visible, it’s time for analysis! A natural choice for things that oscillate periodically is Fourier analysis. It produces what’s called a spectrum for the data, and here’s the particular version called the amplitude spectrum: 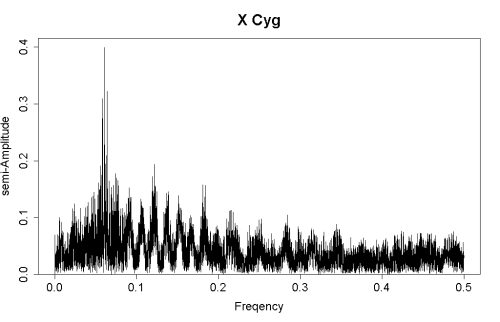 For each frequency of oscillation, it computes the size (amplitude) of oscillation which best matches the data. The strongest response is at frequency f=0.06103 cycles per day, which corresponds ot a period 1/f=16.386 days.

There’s also response at most other frequencies, but that turns out to be due to the main period. Its influence leaks to other frequencies, a phenomenon known as aliasing which we examined in another post. There are some fancy-shmancy ways to eliminate most of the aliasing in order to “clean up” the spectrum, one of which produces this result: 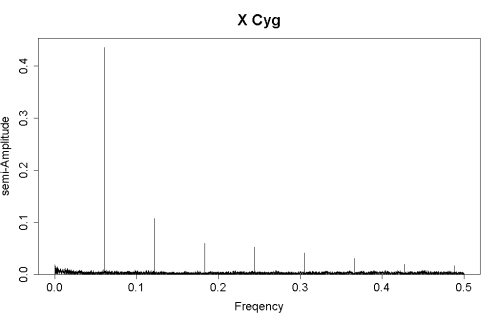 That’s quite a bit clearer! Now there are only 8 frequencies at which we note strong response, and they’re all multiples of the fundamental oscillation frequency of this star. They’re the “harmonics” of its oscillations, and they combine to make the particular form of its cycles.

It’s also worth noting that in between those genuine oscillation frequencies, the level of the spectrum is extremely low. The average value is only about 5 mmag, so if there were another oscillation even a little stronger than that we’d be able to detect it. That’s how good the professional data is!

And what is the form of its cycles? The easiest way to see it is to fold the light curve. Essentially, we wrap time around in circles, with one circuit exactly equal to the period of the oscillation. Doing so should make each moment of maximum brightness align with all the other maxima, and each minimum align with the other minima, and give us a good idea of the shape, or waveform, of the cycles of this star. 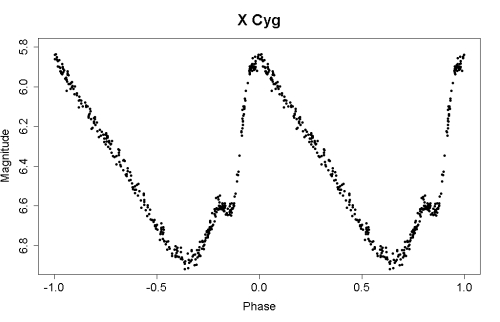 Not only can we clearly and easily see the shape of the oscillation (the waveform), we can even note some interesting fine details, like the “bump” in the light curve at about phase -0.2 cycles. Such bumps are seen in the light curves of many Cepheid-type variables. Note that the bump itself is considerably smaller than a tenth of a magnitude, how could visual photometry could reveal that? Professional photometry has shown us the shape of this star’s variations in fine detail, and nailed down the period and amplitude of this star with precision.

Take that, you old-style amateurs with your visual photometry!

I took the data from a single one of those amateur observers. His observer ID code is “LX” and he was Wayne Lowder (may he rest in peace), formerly president of the AAVSO, a very skilled observer, and a genuinely wonderful person. He alone did 4,852 visual observations of X Cyg, over 12 times as many as all the professional data I was able to find combined. Here’s his raw data: 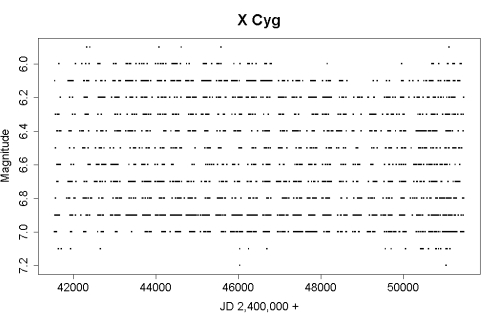 It doesn’t look like much either. But again, the cycles are squeezed together, and there’s so much data that different points are plotted on top of each other. Time for analysis!

Let’s do Fourier analysis again. It gives this: 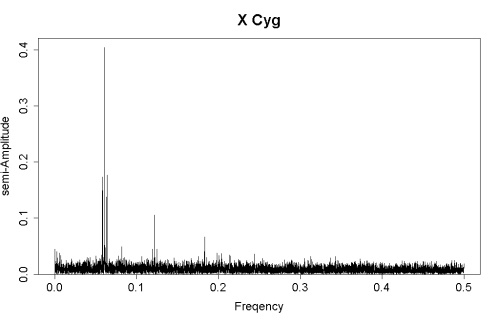 This amplitude spectrum is better than what we had with the published photometry. That’s because the professionals observed so intermittently, there were so many large gaps between their observing runs that aliasing was a worse problem for their data.

But this amplitude spectrum is not as good as the “cleaned” version from professionals. So, let’s apply the same cleaning technique to the amateur data: 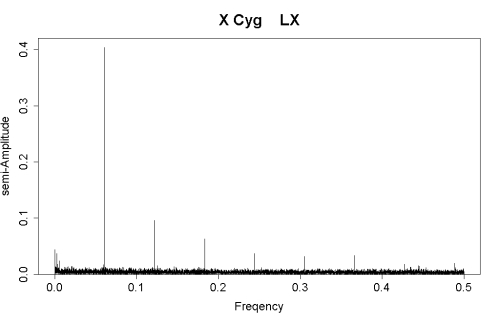 Well well! The cleaned spectrum is almost as good as that from published photometry after all. There are 8 frequencies at which we have significant response, and they’re all multiples of the fundamental oscillation frequency of this star. We can also expand the y-axis and superimpose both spectra, leaving out the signal frequencies so we can focus on the background “noise” level, with that from the published photometry in blue and from visual photometry in red, to see how they compare: 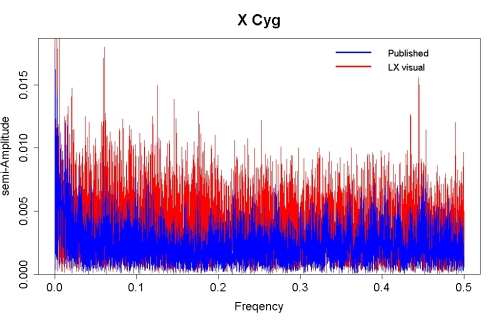 The background (“noise”) level is only about 5 mmag for published photometry. But it’s a bit less than 10 mmag for visual photometry. That means we could detect oscillations with amplitudes only a little bigger than that. Which is impressive, since it’s smaller than the resolution of visual photometry. It turns out that we can detect features smaller than the data resolution because of the statistical power of large numbers. Amateurs contribute so much data, that its statistical power is magnified greatly. 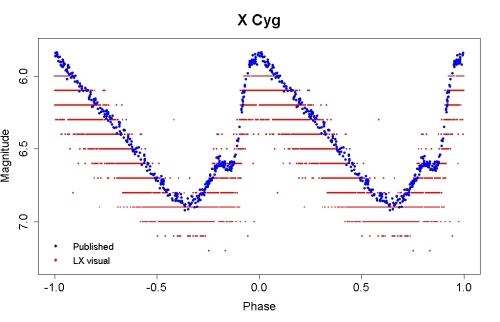 The visual data shows a lot more variation — a lot more “scatter” — than the published photometry. But there’s a lot more of it. We can take advantage of its plenitude by averaging the data over intervals 0.05 cycles wide. When we do that with both data sets they compare thusly: 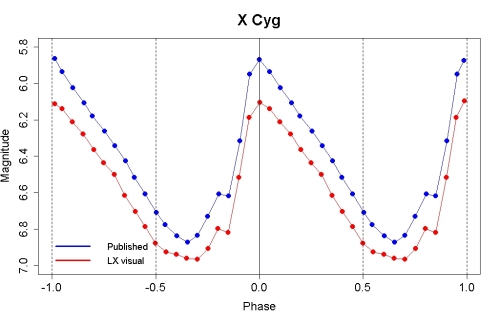 In spite of the greater variation in visual data, their greater numbers make the averaged light curve nearly as precise as that from professionals. We can even see fine details which are smaller than a tenth of a magnitude, like that “bump” on the light curve at phase around -0.2 cycles. There’s so much visual photometry we can even average it over smaller intervals, only 1/50th of a cycle: 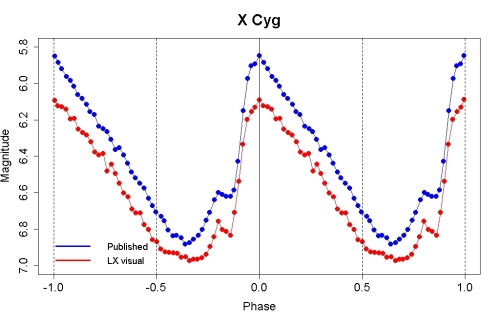 There is indeed enough information in the visual data (because there’s so much of it) to see the detailed structure of the waveform.

We do notice that there’s an offset between the two light curves. Wayne Lowder’s data is consistently about 0.17 magnitudes fainter than the published photometry. If we offset his data by this amount we can see just how well the two different sources of data agree: 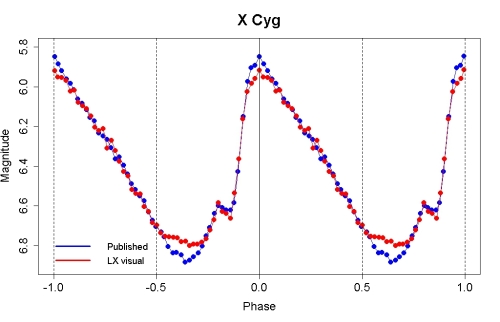 Yes, Virginia, visual data really can compete with professional photometry. But to do so requires large quantities of data. Experience and skill on the part of the observer doesn’t hurt either! It’s a lot of effort to accumulate nearly 5,000 visual observations of just one star (and Wayne Lowder observed a lot more than just this one star!), but its scientific value is tremendous. The value of the data set taken as a whole is comparable to that from professionals.

Amateur astronomy, whether by high-tech or just by eye, is a rewarding task, both for the observer and the analyst. If I have anything to say about the matter, it will not be a thankless task.

This entry was posted in astronomy and tagged Astronomy. Bookmark the permalink.

17 responses to “Seeing the Light”