The Committee for the Advancment of Scientific Skepticism (CASS) has issued a report on a course supposed to be about climate change, taught by Tom Harris at Carleton University in Canada. Harris is associated with the International Climate Science Coalition, and is a confirmed speaker for the upcoming climate conference to be hosted by the so-called “Heartland Institute“.

CASS reviewed video of Harris’s lectures, and found a bounty of errors as well as a consistently false portrayal of climate science. Let’s take a look at an example in which Harris indulges in one of the many ways that fake skeptics make fake arguments about global warming.

[Land surface records go back to 1880 and global data from NASA show] “fairly substantial rises, we’re talking about perhaps almost a degree from the zero line up here. Now, if these measurements were real — and that’s a big if, we’ll talk about it later — you would expect this kind of warming to be visible, in let’s say, the United States…. it has by far the best temperature record of anywhere in the world…. You would expect to see that if there was global warming, that there should be some indication of warming in the United States. Well what you see is… there is a very slight overall warming in the United States, but in the 1920s and 30s we were just about as warm as we are today.”

Yes, Tom Harris is employing one of the tactics warned about here. Over a small region (and the conterminous USA is only 1.6% of the globe) the pattern may be different from that of the whole planet. Furthermore, the level of noise is sure to be larger — much larger in this case — allowing the fluctuations to dominate, obscuring the real trend. When you focus on the real issue, the globe, the long-term trend dominates and global warming is clear.

But what’s most interesting about the “USA doesn’t show the warming” argument is that it’s so wrong. Because, contrary to Harris’s claims, we do see warming in the United States, the overall warming is more than “slight,” and the 1920s and 30s were not “just about as warm as we are today.”

To find this out we have to do more than take Tom Harris’s word about U.S. temperature. Alas, most of the students in Harris’s class probably didn’t study the data themselves and probably don’t know much about statistical data analysis. Let’s follow another piece of advice given here, and study the data ourselves.

Here are annual average temperature anomalies for the USA (the lower 48 states) according to data from the National Climate Data Center (I’ve converted from Fahrenheit to Celsius):

Right off the bat, it’s obvious that the USA has gotten warmer. In fact it’s so obvious that even Tom Harris admitted it, although he called the warming “slight” while referring to the global change as “fairly substantial.” He also said that the 1920s and 30s were “just about as warm as we are today.” But that just ain’t so. There were some hot years back then, but the longer-term averages — hell, even the medium-term averages — don’t match what we’ve seen lately. This is clear if we smooth the data, so we get a better look at the signal and less at the noise:

Lest you object that I’ve applied some fancy smoothing method designed to get what I wanted, let’s apply the simplest “smoothing” method of all. Let’s compute 5-year averages rather than 1-year averages. We get this:

Speaking of trends, since about 1975 the USA has shown rapid warming, at a rate of about 0.3 deg.C/decade. 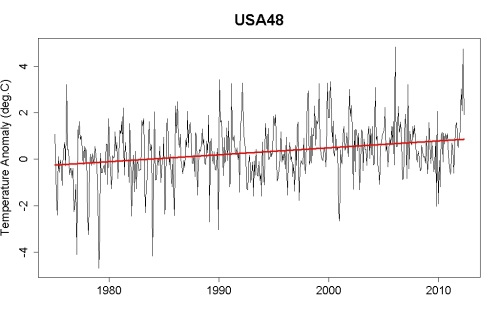 That’s bigger than the global rate of about 0.17 deg.C/decade. But for some reason, Tom Harris told students that the global warming was “fairly substantial” while the USA warming was “slight.” Why do you think he did that?

Lest you object that he was talking about a data record over a century long rather than a 37-year trend, consider this: the total change in the smoothed global temperature record (from NASA) over the time span 1895 to the present, is about 0.89 deg.C. The total change in the smoothed USA temperature record over the same time span is about 1.15 deg.C.

Yet for some reason, Tom Harris referred to the global warming as “fairly substantial” but called the USA warming “slight.” Why do you think he did that?

We keep seeing the same old tactics used over and over again. It’s like a recipe — focus on an area that’s too small and/or a time span that’s too brief, show some graph and say it shows one thing when it actually shows another, avoid any analysis which might reveal what the true behavior is. It’s how fake skeptics convince themselves, and sometimes others, of fake ideas about the science. I’ve gotten used to it. But I find it deeply troubling that it has now invaded the classroom.

75 responses to “In the Classroom”