Suppose you were suffering from a serious illness which attacked many of your internal organs. It’s likely to be fatal, so your wife is very concerned about the results of your latest medical tests. They indicate that your heart, lungs, and liver are degrading rapidly, but that your spleen has actually improved. In fact your spleen didn’t show any signs of degradation, even over the long term. So you go home and tell your wife, “Great news, honey! My spleen is in better shape than it was before!”

That wouldn’t really be an honest report of your overall health, would it?

But that’s exactly what Anthony Watts has graced us — or should I say, disgraced himself — with, in his latest post about sea ice at WUWT. He crows about how much sea ice there is in the Arctic, and how it has reached “near normal” levels (remind you of anything?). But if Arctic sea ice is disappearing in a “death spiral,” how could one possibly do so? Well, if your heart, lungs, and liver are degrading rapidly, how could you possibly report that your health has improved? Talk about your spleen!

It’s easy. First, look only at a brief moment of time, quite ignoring what really matters, the trend. Second, look only at a small region of the Arctic, quite ignoring, well, most of it. Be sure to pick the one region that happens to show signs of improvement at this particular moment. It’s a classic strategy called “cherry-picking.” As for an overall survey of the state of Arctic sea ice and its statistically significant trends — we can’t have that! It would show just how dire the situation is.

Which goes to show that Anthony Watts is no skeptic. When he finds some excuse — any excuse — to blind himself to the obvious (that Arctic sea ice has been and continues to be one of the most compelling signs of global warming) Watts has no skepticism to apply. Instead he’ll bring his usual level of infinite gullibility. Honestly, it’s pathetic.

But it’s the same strategy that almost every fake skeptic has used (or should I say, abused) and many of them make their modus operandi. And well they should, because if you want to deceive the naive (including yourself), it works.

What has really been happening to sea ice lately that can tell us about the recent course of global warming?


A good place to start is take a close look at sea ice extent data from the National Snow and Ice Data Center. The data consist of monthly averages for each hemisphere. This enables us to estimate trends in sea ice extent, not only overall, but separately for each month of the year. We can also investigate whether trends have changed recently. I’ll do so with a simple strategy: compare the trend using data up to 2000.0, to that using data since 2000.0. I’ll also take the trend estimated using just the earlier data and extrapolate that to the present, to give a visual impression of how sea ice has departed from its previous trend since the year 2000 began.

Here’s the overall result for the northern hemisphere: 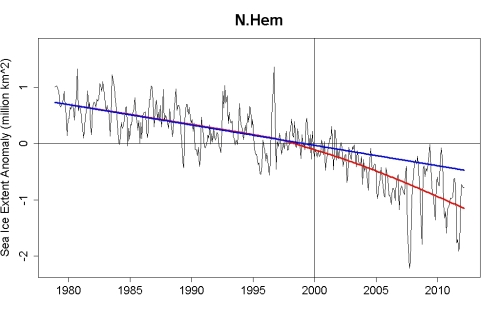 The thin black line is Arctic sea ice anomaly (anomalies are computed relative to the entire time span). The blue line gives the trend estimated using only the data prior to 2000, which has been extended to the present to show what would have happened if the trend had continued unchanged. The red line is a smoothed version of the actual data, to show what did happen.

There’s been a clear and sizeable decline in Arctic sea ice, which was already clear (and sizeable!) by the year 2000. Since then, Arctic sea ice declined even faster than it had previously — the change in its rate is statistically significant. The loss of Arctic sea ice is one of the most dramatic consequences of global warming, and is happening quite a bit faster than computer models have predicted.

Things are different for the southern hemisphere: 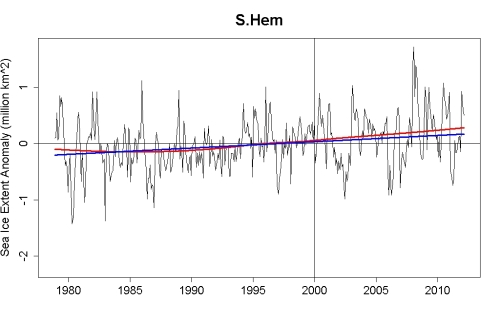 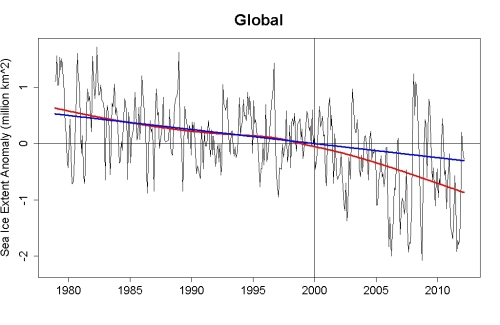 It’s also interesting to study how the trends vary throughout the year by estimating them for individual months. Here are the monthly trends (Arctic in red, Antarctic in blue, global in black): 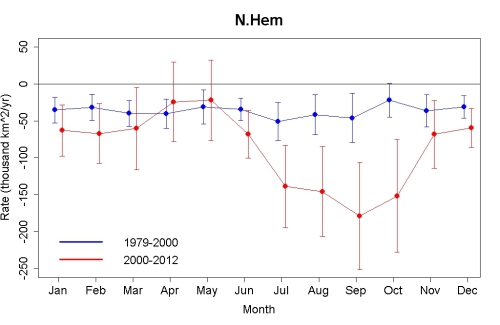 This shows that the acceleration of Arctic sea ice loss has mainly been a summer-autumn phenomenon. Again things are different in the Antarctic: 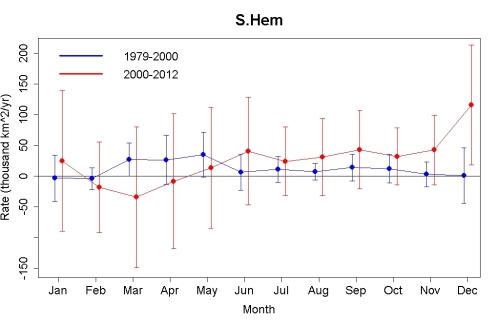 There really hasn’t been much change in the growth rate of Antarctic sea ice since 2000, although there are signs of a possible acceleration of December increase.

A clear picture emerges: the main difference in sea ice changes since 2000 is that the Arctic is losing sea ice much faster than it was before — the situation has not only worsened, it has worsened a lot faster than expected. Not to see that it’s in a death spiral, you have to be delusional.

What’s happened lately to earth’s ice (the cryosphere) in general, and Arctic sea ice in particular, is immensely powerful evidence of rapid and unprecedented global warming. Anyone who tells you different, is selling something.

Another version of the same data: 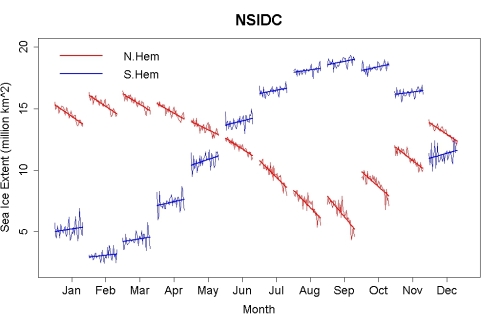