A favorite tactic of those who deny global warming is to exagerate the importance of the temperature record of the contiguous United States (the lower 48 states of the continental USA). It’s only 1.6% of the surface area of the planet, so it’s not truly representative of the globe as a whole. But what the heck, it is part of planet earth, so it’s interesting to examine the temperature history of the contiguous U.S., aka the “lower 48 states,” aka “USA48.”


Another recurring tactic is to portray USA48 temperature change (and other things too) unrealistically. For instance, Steven Goddard actually claimed that most of the USA isn’t warming at all. The National Climate Data Center reports temperature from 1895 to the present for the lower 48 states, as well as the entire contiguous U.S. and various regions of same. Here are annual average temperature anomalies (using the entire time span as a baseline) for USA48: 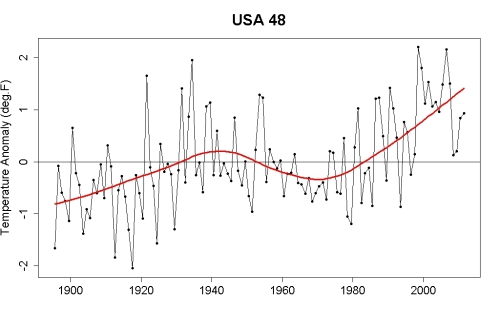 Here are the trend rates for each of the 48 states, plotted on a longitude-latitude grid, warming trends shown as red dots and cooling trends as blue dots, with larger dots indicating larger trends: 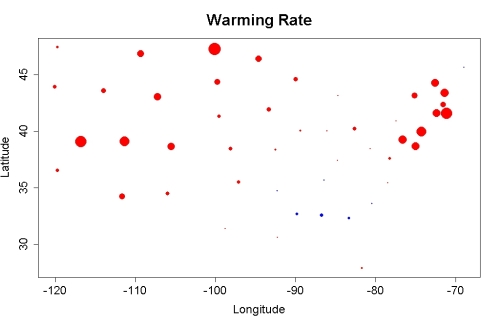 Notice: there are very few blue dots, and they’re all small.

If we consider the trend rates from 1975 to the present for each of the 48 states, the warming is even more pronounced. Here are warming trends shown as red dots and cooling trends as blue dots, with larger dots indicating larger trends: 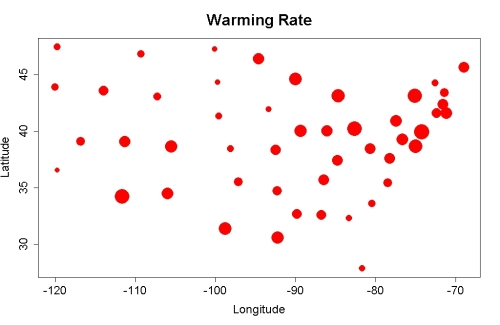 Notice: there aren’t any blue dots.

Chip Knappenberger chimes in with his temperature update for the USA only. He starts by showing only data through 1997, dropping the hot years which followed, and claiming that:

… there was really not much worth writing home about—there were signs of inter-decadal variability, but nothing that seemed to scream “dangerous anthropogenic global warming!” The overall upward trend was being driven more by cool conditions in the early decades of the record, rather than warm conditions at the end of the record. 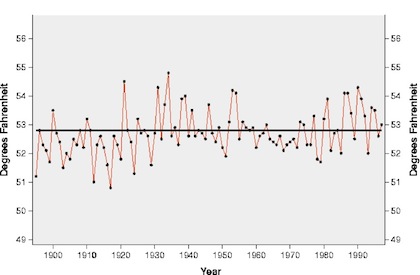 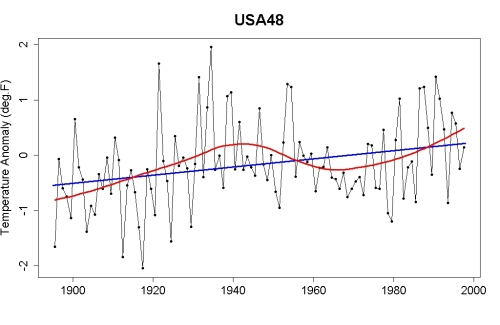 It sure looks like the overall upward trend was driven by warm conditions at the end of the record. Let’s reduce the noise by plotting, not 1-year averages, but 10-year averages: 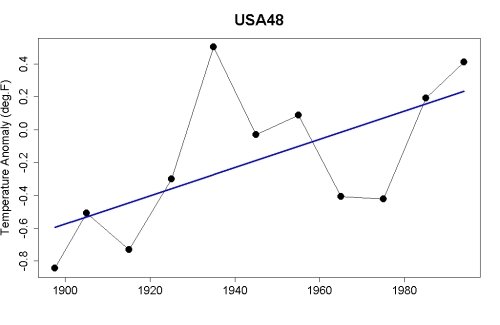 No doubt about it, the trend comes not just from “cool conditions in the early decades of the record,” but also from “warm conditions at the end of the record.” And that’s ignoring everything from 1998 onward.

Splitting the record into pieces at 1998 is yet another common tactic. Not only does doing so omit the extreme 1998 rise from earlier data, it also makes for an artificially high starting point for subsequent data — kinda like tracking the heights of men walking through a doorway but deliberately starting with Shaquille O’Neal, because you know that whoever comes afterward is likely to be shorter. Should we take to calling that tactic the “Shaq attack”?

Starting with 1998, temperatures in the USA48 were way higher. Here are the decadal averages for the full record, from 1895 to the present: 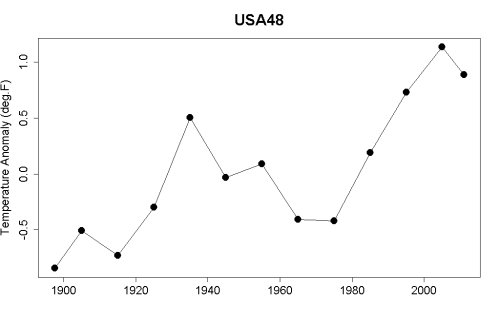 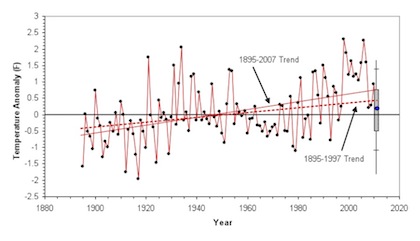 It’s curious that Chip Knappenberger placed so much emphasis on the result of a single year, or even a few years, especially since the temperature over a small fraction of the globe (a mere 1.6%) shows so much more variation than the global average. The fact is that a single year, unless it’s so far out of bounds as to be astounding, isn’t going to tell us a whole lot. Focusing on a time span which is far to short to be meaningful just might be the fake skeptics’ favorite tactic of all.

Clearly, over the long haul it has gotten hotter here in the USA48. But if you listen to the wrong people, you might get the wrong impression about that.