As a cherry-picker’s guide, it’s outstanding; those who want to characterize temperature trends based on an agenda rather than hard science will find what they’re looking for. But as an appraisal of actual temperature trends, it leaves a lot to be desired. The main conclusion is unchanged from his original post:

But I conclude that my original article’s summary remains applicable:

I too haven’t seen any evidence that over the last 30 years global warming has accelerated (except in the UAH lower-troposphere data, but that evidence is scant). But what about that claim of “a much slower rate than that projected by the ensemble of climate models” — a claim which is characterized as “for certain”?

The claim seems to be based on this graph:

which is an updated version of this graph from the original cherry-picker’s guide: 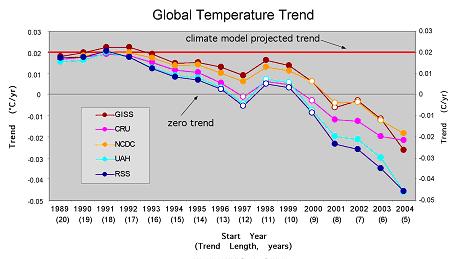 Note that the original graph shows a number of statistically significant negative trends, although all of them cover less than 10 years. Note also that in the update, those statistically singificant short-term trends are absent (except for the 9-year HadCRU trend). Perhaps Chip should have thought about why that is, and why it makes for a superior cherry-picker’s guide, but a poor characterization of actual temperature trend.

You may already have guessed that Knappenberger used monthly data — which shows very strong autocorrelation — but didn’t compensate for autocorrelation. So, his indications of “statistically significant” are, well, not. He does mention in the update that he omits this factor.

But let’s get to the heart of the matter. Are the observed trends really “a much slower rate than that projected by the ensemble of climate models — for certain”? Instead of just plotting trend estimates of observed data, let’s put some 95% confidence intervals on them. I’ll omit the compensation for autocorrelation, but use annual rather than monthly data so the estimates will be pretty good. Here’s the result for data from NASA GISS (plotted in red), compared to the actual mean trend from the given start years of the AR4 model runs (plotted in black) (click the graph for a larger, clearer view):

Gosh. Suddenly that “much slower rate” no longer seems “for certain.”

But wait! There’s more! There’s uncertainty not just in the observed trend, but in the model estimates as well! Let’s add the 90% coverage region (from 5% to 95%) for the spread of individual model runs:

Gosh. Suddenly that “much slower rate” is definitely NOT “for certain.” In fact, it’s not even plausible.