Bob Tisdale has done it again. The guy who thinks that “eyeballing” the correct lag and scale factor for fitting time series is better than multiple regression now comments on variability in climate models, not using climate models but using the multi-model mean.

Of course Anthony Watts regurgitates. Worse yet, Roger Pielke Sr. not only endorses Tisdale’s “analysis,” he actually suggests “I also urge Bob to submit this analysis to a peer-reviewed research journal so it can be assessed by the entire climate community.”


The heart of Tisdale’s “work” is a claim he emblazons in red on his graphs (six times no less):

Apparently Tisdale just doesn’t understand that when you average across a large number of models, you wipe out most of their natural variability. If you then look for variability in that multimodel mean you won’t find it. Tisdale really fumbled the ball — again.

Allow me to illustrate.

First let’s look at some artificial data. We’ll start with the global average temperature from GISS and smooth it:

Let’s pretend — just for illustrative purposes — that the smooth curve is the actual (forced) climate and the deviations from it are natural variation. Let’s also pretend that we have a computer model which simulates the climate with near perfection. It get’s the forced variability right, and simulates the natural variation correctly as well. We run it 10 times, and it gives us these 10 simulated temperature histories:

Pretty damn good model, right? It should be — we designed it to be correct.

Now let’s take the 10 model runs and average them to compute a multi-model mean: 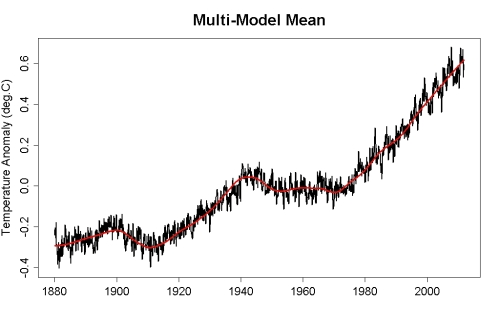 Tisdale actually looks at changes in 30-year trends and 17-year trends for sea surface temperature data. He compares the result from actual data (HadISST1) to the multi-model mean from IPCC AR4, and concludes that the models fail to reproduce sufficient multidecadal variability. We can do the same with our toy model of temperature history. First let’s compare the 30-year trends from the individual model runs, to that of the actual data (from GISS):

Note that not only do the models give good results (within the error limits), they also show about the same amount of natural variability as the actual data. Now let’s compare the actual data 30-year trends to those from the multi-model mean:

Clearly, Bob Tisdale didn’t get it. Clearly, neither did Roger Pielke Sr.

Tisdale used HadISST1 for estimated sea surface temperature and the AR4 multi-model mean to characterize “the models.” He got this for 30-year trends over time:

Using the same data, I get essentially the same thing (but I won’t bother showing the projection into the next century, just the observed time span): 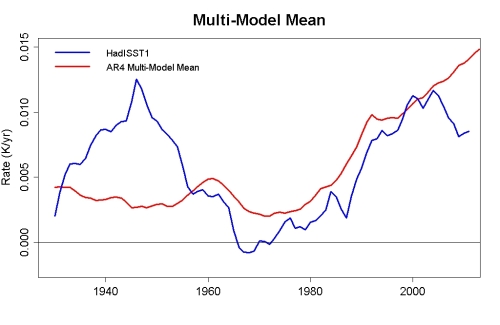 Indeed it’s true that the multi-model mean shows less variability — on both interannual and multi-decadal time scales — than the observed data. That’s because the process of averaging wipes out the natural variability. Tisdale didn’t get it. Neither did Roger Pielke Sr.

Let’s compare the observed HadISST1 data to some actual model runs (rather than a multi-model average). Here’s the result of 30-year trends for 9 runs of the GISS-ER model, together with the AR4 multi-model mean:

Note that the individual model runs show much more variability than the multi-model mean. In fact they show variability comparable to that shown by the observed data.

There are definitely problems with the models. For one thing, they don’t reproduce the rapid warming of sea surface temperature from 1915 to 1945 as strongly as the observed data indicate. But overall they’re not bad, and the amount of natural variability they show is realistic.

Certainly the models need more work. Certainly they should be examined with a critical eye. Just as cleary, Bob Tisdale is not the right person to do this. Neither is Roger Pielke Sr.