Several readers pointed out that reanalysis data in general have difficulties, especially as the sources of available data with which they’re “driven” has changed over time. It was also suggested that the ERA-interim reanalysis data is the most up-to-date and perhaps most reliable, while the NCAR/NCEP has some known problems, particularly with humidity estimates in the upper atmosphere. This motivated me to look for recent changes in the seasonal cycle, not in reanalysis data, but in actual temperature data based on direct observations.

One difficulty with using major global and hemispheric temperature averages is that they are almost always reported as anomaly rather than absolute temperature. Anomaly is the difference between temperature at a given time, and its average for the same time of year during a baseline, or “reference” period. As such, the seasonal cycle is already removed from the data — which of course makes it more difficult to study the seasonal cycle!

Therefore I studied monthly global average temperature data from NASA GISS, to look for a residual seasonal cycle in data after the baseline period. The GISS baseline is from 1951 through 1980. It actually goes from Jan. 1951 through Dec. 1980, so I often prefer to give the baseline as 1951.0 to 1981.0. I’ve done this before, and I even include the residual annual cycle when using GISS data to predict upcoming temperature.

This time I’ll do things a little differently. I’ll look at hemispheric temperature rather than global, and since I’m particularly interested in the seasons for land-dwelling creatures (like us!) I’ll use the GISS data based on meteorological stations only rather than the combined land+ocean data sets.

The process is quite simple. I started with GISS data for met stations only, for the two separate hemispheres. Then I isolated the data since the end of the baseline period, i.e., data from Jan. 1981 to the present. Finally I averaged the temperature anomalies by month. This will tell us the average temperature change from the 1951.0-1981.0 baseline period (which is centered at 1966.0) to the 1981.0-present period (which is centered at about 1996) for each month of the year, for each hemisphere. It constitutes a convenient comparison between two successive 30-year episodes. Without further ado, here ’tis:

We can also compute the rate of warming from 1981 to the present separately for each month. We get this: 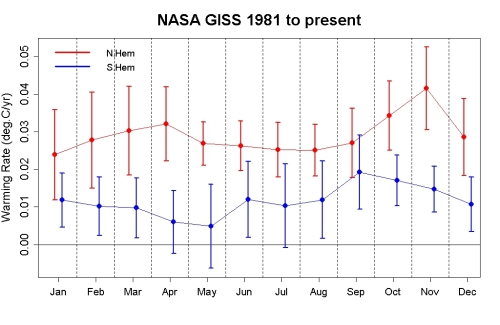 This offers yet another surprise! For the southern hemisphere, the result is at least similar to that from the direct computation of average anomalies. But for the northern hemisphere, the warming rate over the last 30 years has been greatest for November! How can this be?

Such a result could emerge if November warming was exceedingly weak, compared to other months, early in the last 30 years, but strong (even compared to other months) in the latter part of the last 30 years. This is indeed the case, as is confirmed by computing the average anomaly by month for each of the three decades 1981.0-1991.0, 1991.0-2001.0, and 2001.0-2011.0. In the earliest of these three decades, northern-hemisphere November warming (relative to the 1951.0-1981.0 baseline) is dramatically less than other months for the northern hemisphere (in red, southern in blue): 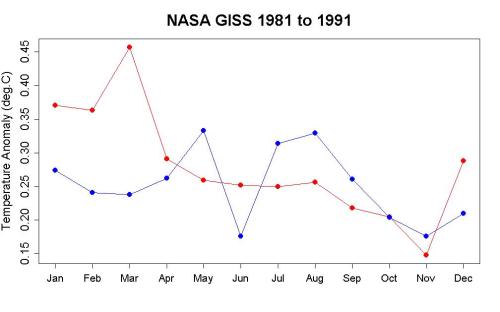 By the middle decade, N.Hem November warmth has caught up to other non-winter months:

For the final of the three decades, N.Hem November warmth is large compared to other months, larger than that for January and February, and nearly as large as that for March:

Hence in the northern hemisphere during these three decades, November started with quite modest warmth (relative to other months) but ended nearly as warm as winter/spring.

Whether one gauges seasonal changes by the change in monthly anomalies from the baseline period to the last 30 years, or by the warming trend rate since 1981, it is still clear that winter has warmed faster than summer in both hemispheres. The difference, based on observed data, is greater for northern-hemisphere land areas than southern. Faster winter warming than summer warming is one of those “fingerprints” of global warming due to increased greenhouse gases. And the increase in greenhouse gases is due to us.