We already exposed the graph of “Arctic Region Temperatures” used by Joe D’Aleo as not being so. Now Verity Jones has posted a “rebuttal” on WUWT.


D’Aleo posted a graph labelled “Arctic Region Temperatures” which most certaintly was not. I suggested that the stations used had been cherry-picked to give the false impression that the 1930s-1940s were as hot as present times in the “Arctic Region” (you know, the label on top of the graph).

It seems that neither D’Aleo nor Verity Jones can support it as being “Arctic Region Temperatures” or deny the stations were cherry-picked. In his “rebuttal” Jones says this:

Well excuse me but of course they were cherry-picked, but not for the reasons Tamino suggests.

Whoa! Is this the defense against an accusation of cherry-picking — to admit that the stations were cherry-picked? But, says Jones, it was not to represent Arctic Region Temperatures, oh no — it was to show a cyclic variation. He further says:

So no, the stations in the graph weren’t meant to represent the whole of the Arctic.

Let me sum up: Joe D’Aleo ends his post about Arctic sea ice with a graph labeled “Arctic Region Temperatures” which, it turns out, is based on a very limited set of stations, which his defender admits were cherry-picked and do not represent the “Arctic.”

Verity Jones seems to have two strategies for saving face. One is to name as many fruits as he can think of, perhaps to divert attention away from cherries. I’m surprised he didn’t accuse me of being a mango.

The other is to suggest, using yet more “spaghetti graphs” of Arctic temperature records, that the 1930s-1940s may really have been as hot as the present time, at least somewhere in the Arctic. It’s sad that even though the original topic was the Arctic, the whole Arctic, and nothing but the Arctic, the one thing we can’t seem to get from Jones is: the Arctic. Instead we’re subjected to more graphs of hand-picked (shall we say “cherry-picked”?) stations which represent limited Arctic regions in an attempt to suggest that modern temperatures aren’t so hot compared to back then — at least somewhere. Perhaps the saddest part is that he does such a poor job of it.

For instance, here’s his spaghetti graph of 15 stations in northern Canada:

Spaghetti graphs have their uses, but if you want to know about regional temperature (that was the subject, right?) you should compute an actual regional average. Of course these spaghetti graphs are ideal if you want to create more confusion and doubt and give the wrong impression — don’t just leave in all the noise, make it look confusing to boot!

Let’s take the same 15 stations used by Jones and — hang on to your hats folks — actually align the station records and compute a regional average. This won’t be the “Arctic Region” since it’s limited to northern Canada, but at least it won’t be a pile of spaghetti either. 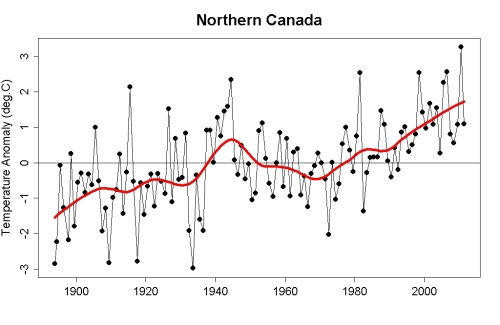 The other “regional” report Jones dumps on us is one from Ed Caryl, who takes station data from the far north and separates it into “urban” (with a possible human influence) and “isolated” (without). Caryl reports little or no trend in the “isolated” stations. Caryl gives us an example of self-delusion: essentially he takes the stations with the most trend and calls them “urban” while taking those he believes have little trend and calling them “isolated.” He actually classifies Eureka (in the NorthWest territories) as “urban”, reporting the massive population thus: “In winter it has always been 4 or 5 men. In summer, the population increases to as high as 20.” OMG!

But even if we do accept Ed Caryl’s cherry-picked set of Arctic stations, what do we get? Of course Verity Jones shows us his spaghetti graph, which looks like this: 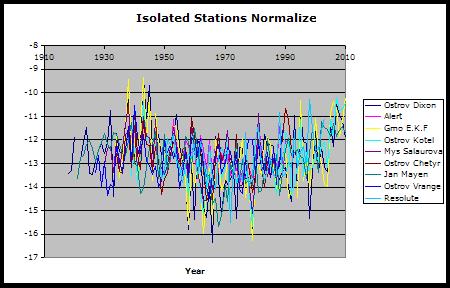 Now if you simply average these data records you won’t get the right result, because Ed Caryl’s “normalization” process shows that he really doesn’t know how to align different station records. Let’s do it for him, and compute an average for these “Far North” stations: 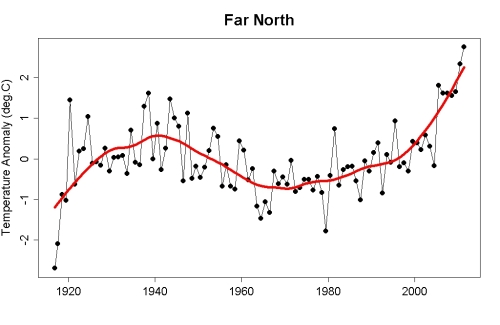 Wow! The last decade is blazing hot compared to the 1930s-1940s. And remember, this isn’t all the stations, it’s the ones which were hand-picked — cherry-picked — by Ed Caryl to minimize Arctic warming. The ones that were heating up really fast, he chose to omit by calling them “urban.”

Apparently this is all we can get from deniers like Joe D’Aleo, Verity Jones, Ed Caryl, and their host Anthony Watts. Cherry picking and deliberate noise and confusion. When it’s exposed for what it is, their house of cards falls apart. Amusingly, we sometimes hear cherry-picking defended with a hearty cry of “Well excuse me but of course they were cherry-picked”, and misrepresentation of Arctic region temperature with “So no, the stations in the graph weren’t meant to represent the whole of the Arctic.”

But now I must correct an error of my own. We can get much more from D’Aleo and friends than just cherry-picking. In fact, shame on me for choosing a title for my follow-up post about D’Aleo’s Arctic misiniformation that implies further cherry-picking from Joe. It really doesn’t expose more cherry-picking at all — this time, it shows Joe D’Aleo just making stuff up.

Perhaps Verity Jones can explain that one to us.