It’s so predictable. Arctic sea ice came close to breaking the 2007 record for decline in some records, and did break the record in some, so the deniers are in “damage control” mode, out in force saying it’s just natural variation. And one of the most misleading of all comes from Joe D’Aleo on Anthony Watts’ blog.


D’Aleo tries so hard to blame Arctic climate change on ocean oscillations. Part of his dissertation includes a plot of “Arctic Region Temperatures”: 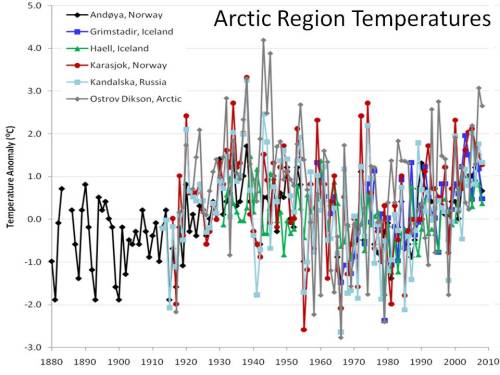 He wants you to think that Arctic regional temperature was just as hot in the 1930s-1940s as it is today. Note that D’Aleo doesn’t average these six data records to form “regional” data, he overlays them so as to create the greatest possible confusion and uncertainty. But far more important …

Do you suspect that these six stations were “hand-picked” to give the impression he wanted to give? Do you think maybe they were cherry-picked? If so, you’d be right.

Even if you only use data from the GHCN (Global Historical Climate Network), there are a lot more than 6 Arctic stations to choose from. In fact there are 137 stations north of latitude 65N. Here’s a polar projection plot of their locations:

The north pole is at the center, the latitude circles are 5 degrees of latitude apart, and longitude zero (toward Greenwich, England) is toward the bottom. Let’s place red circles at the locations used by Joe D’Aleo:

Does that seem to be a representative sample, a fair distribution to cover the “Arctic Region” to you? Of course not. D’Aleo’s selection is nothing but a cherry-picked sample, for no other purpose than to give a false impression of Arctic regional temperature history.

Let’s compute the average temperature anomaly of all 137 Arctic stations in the GHCN:

Wow. That’s … different. Now it’s clear that Arctic regional temperature in the 1930s-1940s was not as hot as today. Not even close.

Of course, a simple average of Arctic stations isn’t properly area-weighted, which is an even better way to represent Arctic regional temperature. Fortunately, the good people at NASA have already computed regional area-weighted temperature averages for us. Here’s the NASA GISS data for the region north of latitude 64N:

Once again it’s clear. Arctic regional temperature in the 1930s-1940s was not as hot as it is today. Not even close.

The misinformation about Arctic regional temperature is only one of the misleading, cherry-picked red herrings in D’Aleo’s post. But that’s what we expect from him: misinformation. He’s good at that, because, as they say, practice makes perfect.

UPDATE 2: Reader Hugh McLean has kindly plotted the Arctic stations in the GHCN on an actual map: