Fred Singer is on tour denying global warming. The “evidence” he offers is one giant red herring after another.


Probably the most idiotic is his claim that

The global surface warming for 1979 – 1997, reported by CRU-Hadley, NCDC-NOAA, and GISS-NASA, and used by the IPCC to support its claim of a GH-gas cause, is problematic. It is not seen by any other observations; we cite six independent methods , incl. radiosonde, satellite, and proxy data.

First let’s be very clear about one thing: Singer’s choice of the time span from 1979 to 1997 is cherry picking. In fact it’s “cherry picking supreme.” He ends at 1997 for one and only one reason: if you go any further his claim is not just nonsense, it’s obvious nonsense.

And there’s nothing special about 1997 for the IPCC reports, or global warming in general. He gives the impression that this was some kind of “key” time span. It isn’t. Except of course for Singer, because that’s his cherry-picked time frame to support his false claim.

Setting aside for the moment that the choice of 1979 through 1997 is truly idiotic, totally irrelevant, and done only because Singer is cherry-picking, what are the trend rates for that time span from, say, surface temperature (NASA GISS), satellite data (UAH TLT), and radiosondes (HadAT2)? Here you are: 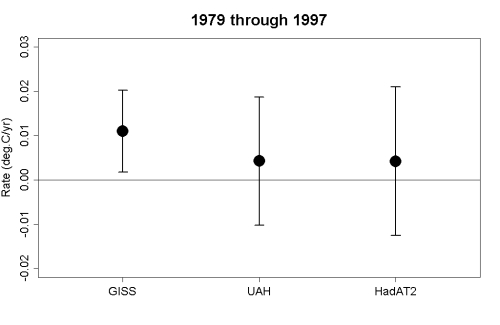 They’re all in agreement with each other.

It seems that Singer bases his claim on the fact that for this very limited time span (a mere 19 years) the warming in radiosonde and satellite data isn’t statistically significant. That’s for two reasons. First, 19 years isn’t a long enough time span to find out — you might as well say there’s no statistically significant warming for the last three days. Second, atmospheric temperature shows more fluctuation — more noise — than surface temperature. In large part that’s because it responds more strongly to short-term noise factors like el Nino and volcanic eruptions, as illustrated here.

If you disdain Singer’s cherry-picking, instead studying enough data from GISS, UAH, and HadAT2 to get a good handle on the trends … what do you suppose is the result?

Singer’s entire “masterpiece” is fake science from a fake skeptic. But we’ve come to expect nothing else from the guy who has denied, among other things, the health risks of tobacco smoke.