Robert Grumbine has a post in which he takes an unusual look at global temperature data. I’m afraid I must take exception to his methodology.


He starts with the HadCRUT3v data set (and kindly provides his data as an ExCel file here). He then defines a couple of different versions of “climate normal” as the average over some particular time frame. In fact his first choice is to use the entire data set, for which the climate normal is just the data average:

Then he transforms the data values

into “cooling degree months.” These are the differences between a given month’s value and the average, which we can call

First of all we’ll note that

doesn’t depend on time, it’s a constant, so its sum is simply that constant times the number of terms. Therefore

. We’ll call them cumulative sums, and mathematically denote them as

For instance, when defining the average using the entire time span Grumbine gets this for the accumulated cooling degree months:

and I get this:

Later he uses a different time span to define “normal.” But that just leads to a different value for

, so it only changes the result by adding a linear trend to the previous values.

My complaint is that it’s way to easy to see patterns in cumulative sums that really don’t mean anything. Suppose for instance that “normal” temperature was zero, and the deviations from normal were purely random numbers — plain old white noise like this: 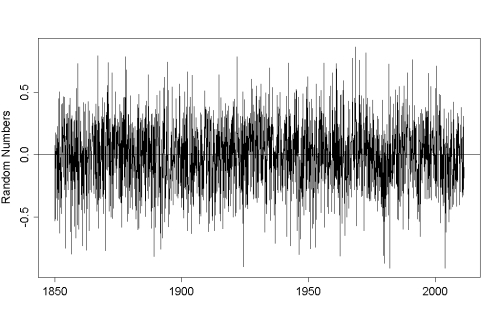 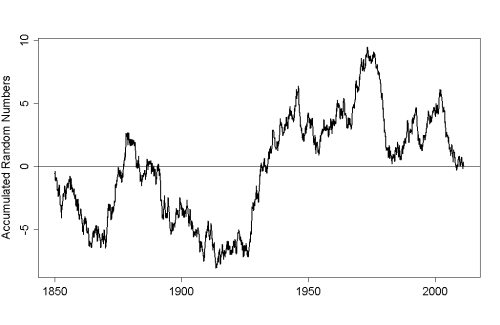 But the pattern really doesn’t mean anything at all. By construction, the time series is just random noise.

In fact we can generate random numbers with autocorrelation similar to the noise (not the signal!) in global temperature, like this:

Then we can compute accumulated deviations from average just as before, and we get this: 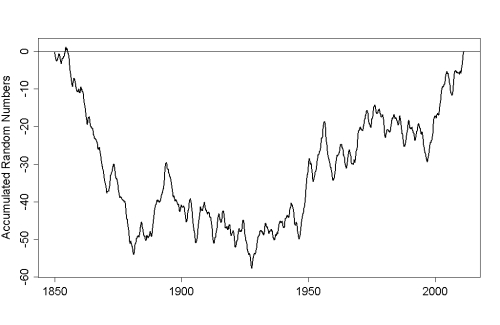 Note the extremely strong appearance of a powerful signal. But again, by construction the data are just random, pure noise.

In fact computing cumulative sums is a very dangerous approach to analyzing data, the autocorrelation is too strong and the likelihood of deducing patterns where none really exist is just too high. So I recommend against it, very strongly.