While looking around for tornado data, I found a fascinating page by Harold Brooks in which he builds a model of the likelihood of a “significant tornado day,” which I’ll call an “STD” (yeah, it’s a funny choice). This is defined as a day with at least one tornado of Fujita scale F2 or stronger.


He was interested in studying runs of consecutive STDs. At first, he simply used the bare probability of an STD (which depends strongly on the time of year) to estimate the likelihood of consecutive runs, but it utterly failed to mimic the observed data.

, then the probability of not being an STD is of course

. In some given number (

) of days, how many runs of

consecutive STDs should we find?

Suppose yesterday was not an STD. If today also isn’t, then it completes a “run” — in this case, a run of zero consecutive STDs. The probability of that happening is simply the probability today isn’t an STD, i.e.:

You probably see the pattern: the probability of a run of

STDs in a row is:

days in a row yes, terminated by a “no” day (some of you may recognize this as a re-parameterization of the geometric distribution). Note that a “run” is defined by the fact that it must end with a non-STD, so every non-STD completes a run and a “run of

days (including the run-ending non-STD). It’s also worth noting that the total probability of all possible run lengths (from zero to infinity) is

That gives the complete probability distribution for the lengths of runs of consecutive STDs. But — how many runs will we observe in a given number (

Since a “run of

days long, the average length of a run is simply the expected value (the average) of

. This can be computed as (angle brackets denote the expected value):

I’ll leave out the details (feel free to indulge yourself!), also mention that there’s a clever way to get this without any computation at all(!), and just state the result:

Since the average run length is

, the expected number of runs in

runs of length 1, and in general

Let’s compute an example. Suppose the single-day probability of an STD is

days (one hundred years). Then the expected number of runs of various lengths are: 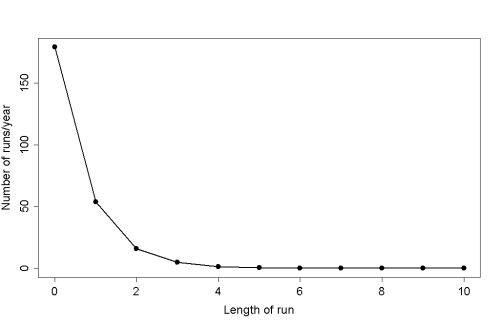 For actual counts of significant tornado days (STDs), the bare probability of an STD depends strongly on time of year. Here’s Brooks’ estimate:

He based this on data from Tom Grazulis’ book Signficant Tornadoes 1680-1991 combined with other data through 1995. I estimated the same thing using data from NOAA-NWS and got this: 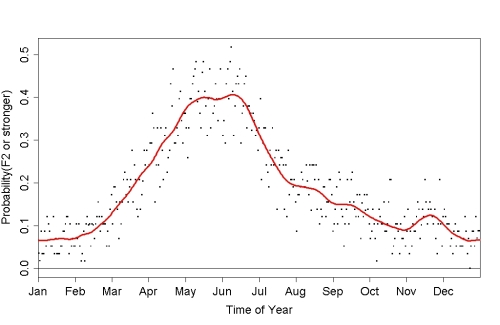 . In fact they should be quite a bit more rare — in a single century we shouldn’t expect any runs as long as eight, and the likelihood of a run of nine is exceedingly small.

But the observed data show otherwise. In spite of the small bare probability of an STD, in the Grazulis data (used by Brooks) over the last century there are two runs of nine in the data record (15-23 May 1949 and 6-14 June 1967). This is too unlikely to be plausible if the simple independent-probability model is correct.

Incidentally, in the NOAA-NWS data there are even longer runs of consecutive STDs. In fact there are three runs of 12 in the record (May 23 to June 3, 1954; June 7 to Jun 18, 1962; and May 9 to May 20, 1982). Of course, the higher bare probability estimated from the NOAA-NWS model means we should expect longer runs. But using those (time-of-year dependent) figures, the observed number of long runs is still well above what’s expected from the bare-probability model.

We are led to the conclusion that the probability of an STD on any given day isn’t just dependent on the time of year, it depends on something else as well — something which increases the likelihood of long runs of consecutive STDs.

“, the probability of STD if the previous day was also, “

“. They’re often referred to as “transition probabilities.” I chose to simplify things a bit by using the notation

Both these probabilities are time-of-year dependent, and here’s Brooks’ estimate of the probabilities throughout the year based on the data from Grazulis:

Incidentally, the other two probabilities are just 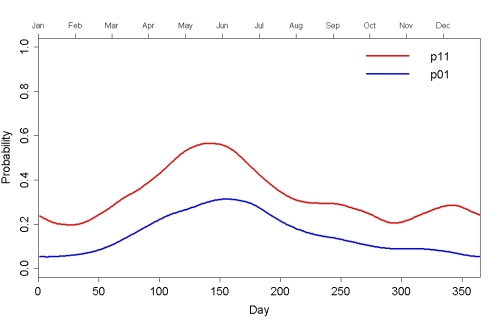 Armed with these estimates, it’s straightforward to run a simulation which estimates the number of runs of any given length

which we’d expect to see in a year. Both Brooks and I executed runs of 10 million simulated days. Brooks ended up with this comparison of expected vs observed runs of length

per year, based on the Grazulis data:

I got this comparison of expected vs observed runs of length

per year, based on the NOAA-NWD data (expected values in black, observed in red): 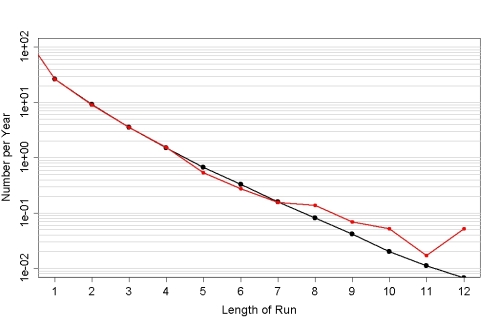 The match is actually quite good. The large visual discrepancy for very long runs is due to two factors: first, the y-axis is logarithmic so small numbers show exaggerated differences; second, long runs are rare so their random fluctuations are larger in proportion to the number of events.

The Markov Chain model actually does give realistic values, but for both estimates (Brooks’ using Grazulis’ data, and mine using NOAA-NWS data) the observed frequency of very long runs is a bit higher than the theoretical estimate. In particular, three occurrences of a “run of 12” in the 58 years of NOAA-NWS data is more than is plausible. It is remotely possible that this is just a statistical fluke, but it’s more likely that the 1st-order Markov Chain model, while an excellent approximation (which the bare-probability model is not), is still incomplete.