Some would like to imply that the problem of CO2 emissions is mainly due to China and India. They are, after all, the 1st- and 3rd-largest total emitters as of 2009, and their CO2 emissions are growing fast. In fact I often hear the complaint that nothing anybody does will make any difference unless China and India go along with the plan. I think this is a just an excuse to argue against doing anything, and I think it’s a lousy excuse.


But the facts remain, that China and India are 1st and 3rd on the list of total emissions, and their CO2 output is growing fast. How fast? EIA provides data on total emissions, for the world and by country, so we can compare them directly. 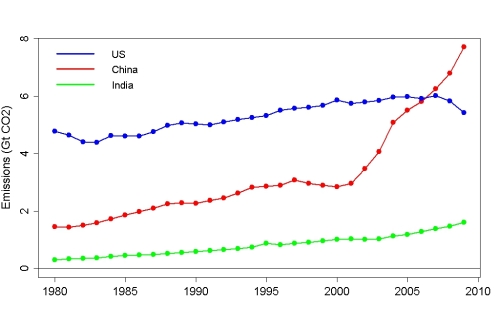 Clearly China and the U.S. dominate, although the Indian contribution is substantial. We can also compare how the cumulative effect of the top 3 emitters compares to total world emissions:

Together, the top 3 are responsible for nearly half the world’s CO2 emissions.

But the main other fact in play is population. China has a much larger population than the U.S. — so does India — and if we compute emissions per capita we get a dramatically different picture of who’s dumping CO2 into the atmosphere most prodigiously: 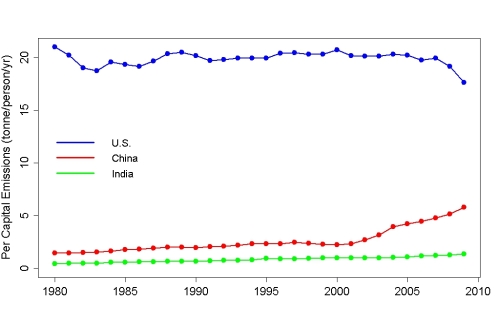 That means that it’s critically important for China to slow their growth of emissions, and eventually (soon!) to reduce them. The same goes for India. Both are huge emitters, and both have huge nations which, through wise administration, can organize effective action on national scales to reduce the danger we all face, together, from global warming. Let’s put pressure on both China and India to face the problem and actually do something about it.

Is it all just talk? Just smoke and mirrors? Are we really a great nation, or are we just selfish and greedy? If we want to be leaders of the world, let’s lead by example. If the U.S.A is such a great country, if we’re really able to accomplish so much, let’s prove it. It’s time to put our money where our mouth is.

Or are we not good enough?

96 responses to “The China Syndrome”